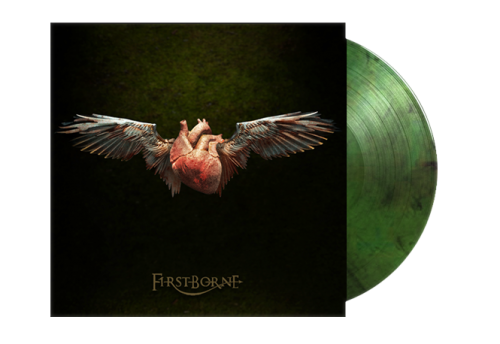 Former Lamb of God drummer, Chris Adler’s new project, Firstborne, has released its debut EP – and it’s probably no coincidence that the 16 minute, self titled EP drops on the same day as his former bands much hyped new album.

Joining Adler, is Megadeth alumni James LoMenzo on bass guitar, Girish Pradhan on vocals and Myrone on guitars.  Firstborne is a much more hard rock oriented project, which seems to shed some additional light on Adlers LoG departure – but we’re not here to focus on that.  Let’s see how this debut EP stacks up…

Primordial opens up the EP with some eerie, cinematic sounds, before the screech of an eagle signals the arrival of some cool riffing.  There’s a killer groove running beneath the surface, largely due to LoMenzo’s bass guitar, the drumming is significantly scaled back compared to what we’re used to from Adler, but it works with this style of music.  I’m not overly familiar with Myrone or Pradhan, but the four members of Firstborne have certainly meshed well together, and I’m very interested to go back and hear more from both artists.

The Anthem has a touch of 80’s hard rock flare about it, and demonstrates the vocal abilities of Pradhan more than its predecessor.  This is all very accessible rock music, and quite easy to vibe with – but ultimately it’s not mind blowing, and while I’m sure this will find its listeners, it’s not going to put Firstborne on the map.  As the band continues to make music together, the potential is there for them to really grab attention though.

Third track, Roll the Dice, is all about energy.  It has a faster pace, some great riffs, and those screams from Pradhan are hard not to like.  With the riffs and lead work demonstrated on this track alone, I can’t quite understand why Myrone isn’t a more well known guitarist – he’s known, sure – but he could be a household name.

Second to last track, Apocalypse is kicked of with a barrage of drums and a scream.  From there, it gallops along, and is probably my favourite track of the EP.  Pradhan also demonstrates a more guttural vocal at times, which adds a little something extra.  There is a guitar solo towards the end that is played with a great deal of feeling, and might be the best solo on offer.

Closing number, Hunter Hunted, is the most “metal” track in my opinion – and it’s all thanks to the chugging guitars, thunderous bass and the “breakdown” section at the two minute mark.  Adlers drumming is fast and furious, and the lead guitar is stunning – there’s a fantastic solo, but it’s all of the other little accents throughout the song that make the guitar stand out.  This track is another highlight, and a great closer.

At 16 minutes long, this is definite worth the listen, even if I stand by my earlier statement that it’s not going to blow your mind.  I hope that Firstborne stick together though, because they absolutely have laid some excellent foundations with this EP.