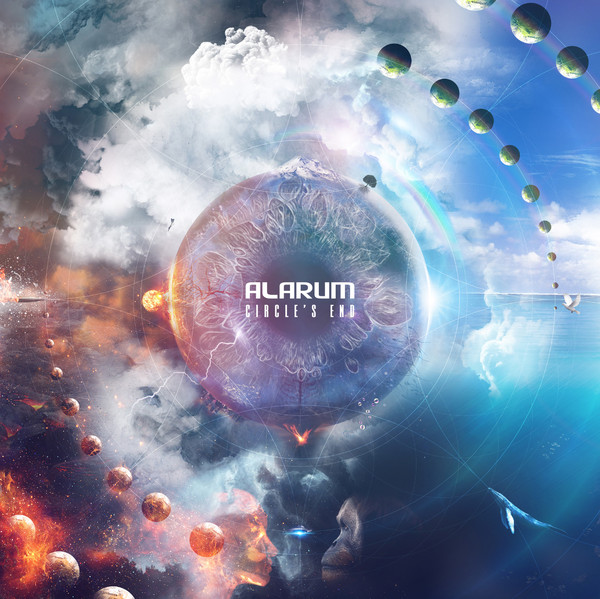 Circle’s End is the newest album by Alarum. This Australian Thrash band utilises other genres in their blend, from Latin to Fusion, making them quite an interesting act. Having been around for over 20 years, it is very surprising to have only just heard about them.  Even more surprising is hearing this new album.

SPHERE OF INFLUENCE, starts off with an intimidating riff, then the whole back kicks in to near death metal proportions, then break into a Jazz coda, then as quick as that twist, they get all POWER METAL/Progressive, and it’s back to that sweet Thrash. It’s a fine opener, with little snippets of other elements of their unique choices of other music to mix in with the core.

SYZYGY, erupts with a dynamic rhythm, with tiny little quirks along the way. There’s lots of emotion here, when the song kicks in, it sounds like a racing game theme, or opening to a fantasy film. Not even halfway in, there’s a sweet breakdown. When the song does get half way, it mellows out to a good moshing flow.

DELTA, well, the intro again is in your face, then we get a beautiful melodic lead, the drumming to this point has been stellar, the bass is expressive and we have a clean cut melodic number at hand. DELTA is a bit of a Power Metal offering. CRSYTALS, well, this is unexpected.  The song opens like a pop song, then we get a minor build up, back to it’s pop sensation. With tiny breaks of METAL then a swift change into acoustic guitar and a sound bite of the ocean. Which cascades into SAND, that has a wondering Latin sound, this is how music/music works.  Fusion is a difficult genre, hence it’s so rare and wonderful when you hear it done right.

SAND has you thinking it’ll be peace, then the band pulls a quick one and goes into SLAYER territory as SAND kicks your ass, but it’s friendly chorus holds back before a progressive solo then back to the THRASH. It’s awesome how it concludes and keeps the magic going. WAR OF NERVES, kicks up straight away, very involved intro then into a Testament sounding progression, with lots of measurements and compositions being utilised to their fullest. The song doesn’t lose itself, just keeps going with the band’s eager attitude.

IN SPIRAL, well, it’s down to the pit for this death/groove number. Just, it’s just how the song can be direct then have a break with it’s expositions, the solos are crazy as the breakdowns would make hardcore bands and fans jealous. Everything you love about Metal is here, not just in this song, but everything. Oh and that surprise twist half way, hehehe.

THOUGHTS TO MEASURE, if your mind has been blown, you weren’t ready or prepared, you were taken into another realm to get ready for the next big thing. Well, can you measure up to this song? It’s on the level, a good level of balance, and, the fun keeps going with many breaks, codas and. Make sure you catch a breath. CIRCLE_S END, ok,  has a different opening again which is a nice touch.

The album is well thought out and the placement of songs is very good. CIRCLE_S end, does it’s twists again after a good run of what you think may be instrumental, but is just MENTAL METAL, and damn good stuff. SOJOURN, the last track and the biggest, it’s humble beginning has you wonder where it’ll go, well, it’s a fine wait, because it’s not long until the true colours shine. We have those breaks again, it’s the nature of this genre and

Alarum are masters of this genre as they have everything well crafted.