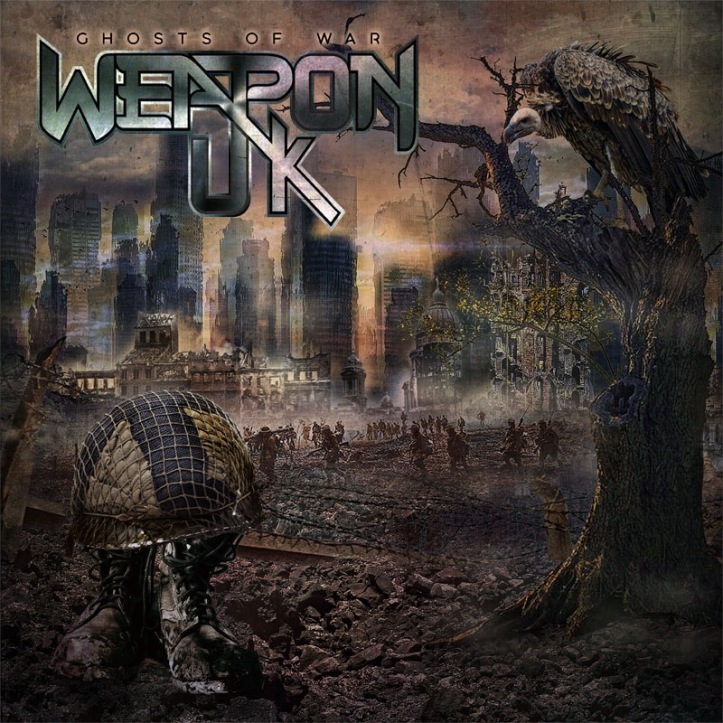 Born in 1980 with the moniker Fast Relief, the Uk based band Weapon  has a long story at their back, a deal with Virgin, opener for Motorhead for their U.K. tour, their own UK Tour  ‘Ace Up Your Sleeve’ in 1980.

2005 and the original lineup reformed for a couple of warm updates in London before a very  Germany on July 8th.

In 2010 Danny & Jeff decided to reform the band releasing the album  “Rising from the Ashes” was  in 2014, preceded by a renaming of Weapon in Weapon UK for ‘legal reasons’

Danny Hynes on vocals and Jeff Summer on guitars, the two original members along with the new rhythm section of Tony Forsythe (Bass/Vocals), and Darren Lee (Drums) will release their new album ‘Ghosts Of War‘ in September 2019.

Short, maybe too much, but necessary bio to understand who was and who is still this band, born in the NWOBHM era.

“Ghosts Of War” is made of full heavy rock rooted in metal sound in which each pieces, ten to be exact, plus “Set The Stage Alight” as bonus track in the vinyl version.

The opener and title track “Ghosts of War” sees Clare Cunningham (ex- Thundermother) as guest on vocals with Danny Hynes. A piece in which the sound is it’s a classic metal style in which the atmosphere is massive and decidedly heavy, both for the structure itself and for the musicality thanks to excellent guitars and a very powerful rhythmic structure itself.

The following “Queen Of The Ride” is much more in my strings with its much more rock and winking way sound, an absolutely catchy chorus and a reference to the seventies sounds. After such a dark opening, this piece manages to reflect a very fresh and more rhythmic mood, definitely a live show piece.

“Redman” can be a melancholic song with a warm atmosphere that although it is enriched by heavy rock sounds, is able to balance perfectly, giving rise to an interesting song, certainly one of the best of this album. Three pieces, three different styles and no defaults, I would say that Weapon UK are in excellent musical form.

The metal references come back with “Sea Of Hope”, a sound that recalls a heavy style with slight epic hints, while in the following “Emerald God” reappears the rock side of the band and in fact I wonder why Weapon UK are also labeled as NWOBHM, as well as some British musicians born in the eighties, while in fact their sound is very heavy rock.

Even “Tourniquet” has a captivating sound, a good bass by Tony Forsythe and a general tonic line in which Danny Hynes’ voice manages to harmonize the entire track, as well as the backing vocals.

“All I Need” has a more toned imprint, more vital, always oriented towards an excellent rock and in which Jeff Summers manages, as in all the songs after all, to make himself known for his guitar skills.

If in “All I Need” the band has again managed to be more catchy, with the following “Hell On Earth” back to sink the roots in a sound more oriented to the seventies, without losing its freshness.

“’79 Revisited” another piece in which Weapon UK moves with ease in a rock piece with heavy veins, absolutely brilliant.

Heavy rock rhythm a gogo for “Set The Stage Alight”, a track from 2017 that is included as a bonus track in the CD version.

Although short, enchanting “G.O.W. Reprise” included in the vinyl version as a bonus track, a ballad with a Celtic flavor with the delightful voice of Clare Cunningham.

What can I say? Welcome back also to Weapon UK who have composed a robust album, highlighting their sound and their style in this new millennium made of bands that continue to draw in the 80’s without having the same class of who created the music in  those years.