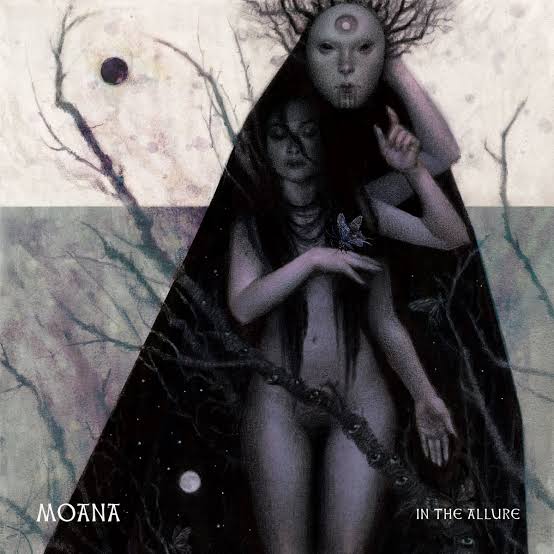 Aussie Aussie Aussie. There is nothing quite like some homegrown talent.
I took a listen to an Australian collective from Perth W.A. recently by the name of Moana.  No, not to be confused with the childrens movie (trust me their sound would not be used as a soundtrack to any child film).
Moana is the creative project of artist Moana Mayatrix in collaboration with musicians Lochy Hoffmann, Austin Rogers and Willow Fearns.  The indie rock group push the limits of goth, rock and  classical with their unique and haunting sound.  Their latest offering “In the Allure” is an album to surely take you on a bit of a rollercoaster. Here is a bit of a look at each track.
“Smoke that Thunders” has a rather long creepy intro before diving into a rock sound of catchy guitar work and forward drumming. The vocal was echoey and taunting with rather dragged out eirie lyrics. The riffs were purposeful and lively. This track had very haunting moments sound wise, I liked it.
“Dracula” opened with vocals and a deep bass. A very interesting yet soft growl followed. Really enjoyed this track the vocal was standout and lyrically great. The instruments painted the background picture and was a nice contrast.
“The Cultess” began with a punch of guitar and drums. However, when the vocals started Moana’s screech was a bit much for me and was rather painful rather than pleasent. This track just didn’t do it for me. NEXT….
“Scarab”- started strong with an again haunting sound followed by an electronic yet somehow dark sound which was the driver behind this track. Vocally more pleasent than the last track. Good enough.
“Sister Winter” opened with an almost classical vocal that kind of reminded me of Amy Lee. This was a much softer track, yet there was distorted guitar and some nice riffs but they stayed in the back like background chat. Bit of a meh track, not bad but not exciting either.
“Blood moon” had a very moody feel to it. The vocal was clear and the lyrics stand out. Slow track but a great track, definitely my favourite off the album.
“Feral Umbilical” was more up tempo yet somehow remained moody. This track really made no sense to me. There was like a feedback sound in there that was unpleasant along with the screechy pitch of the vocal in places.
“E lix A”, a very different track that I’m not really sure how to describe. It was very all over the place and a real mash up. Couldn’t make sense of it.
“Promise” had a drum and bass intro , cool calm pleasant. The drums had an almost anthem vibe to them that you could keep pace with. And that’s about all the good things I can say about it..
In conclusion I’m not really sure how I feel about Moana or their album ” In the Allure.”  I didn’t love it that’s for sure, but I didn’t exactly hate it either. There are probably going to be some lil emo and goth kids digging this and Moana will be their Godess.
5/10
Steph Suter-James.