I have woken up dusty the morning after the night before…

As the coffee touches my soul, the memories from last night swagger in and I smile the smile of the eminently content. Psycho Circus was last night and it was nothing short of brilliant.

However, I think my wife might be leaving me.

From the very beginning, they owned the stage. Their music was deceptive as it shifted between the heavy and the compelling, cycling between the metal and the melodic.

The vocalist had a voice that was robust and he had impressive range, as he growled with the best of them, but could also convincingly carry a tune.

Their energy on stage was immediately apparent, with the place pumping, as everyone seemed to be keen to be a part of what was going on.

These folks reminded me of Mr T in “Rocky 3”, as they were street smart and hungry. 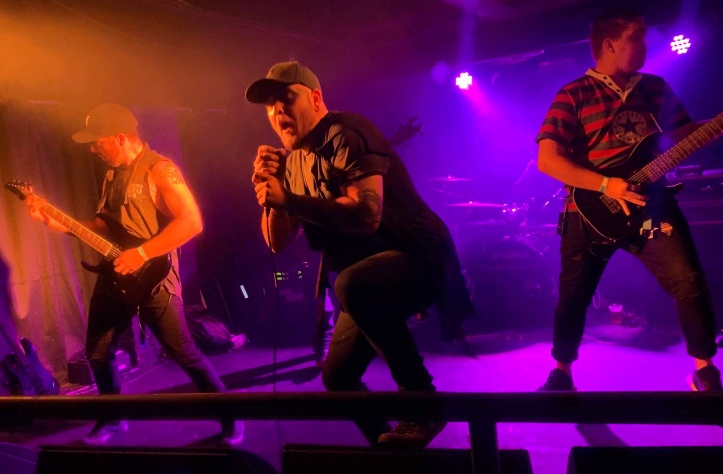 Most of the band sang during each song, but they weren’t in front of a microphone, showing their connection to the music. They were a Unit.

I was impressed by some really clever guitar work throughout their set and the songs carried a sense of social conscience, with themes like living with depression.

Their set held up from start to finish, proving they had stamina to match their talent.

Late in their set they performed a song that was a significant change of pace. It was a curiously quiet and enigmatic track that proved their versatility. It was strong and reached out to the crowd. Whilst they were amazing through their set, their bond as a band shone though in this one. My beautiful was dancing to this one. 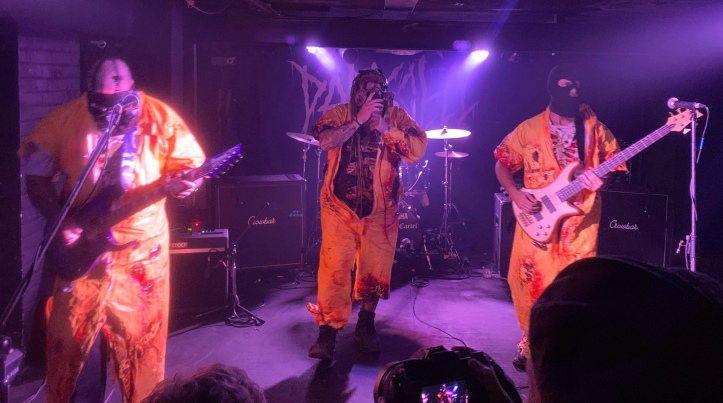 I have seen these rollicking band of miscreants a number of times and had heard a rumour that they had morphed their live act. This intrigued me and I was very much looking forward to what they had done. I wasn’t disappointed!

Gone was the opening with the backing track about a nuclear holocaust, replaced by a shift in the design to their suits. The suits had a zombie-like upgrade, with faux rib cages exposed. This is abundantly appropriate, as the hearts of these folks are always on show for all to see. Their music and opening has morphed into a more robust and mutated version if it’s former self.

NCV slammed with singular style and their energy and enthusiasm on stage was tangible.

They are the people’s band, a group of folks who are just like us, so there is an instant connection with them.

Their sound is chock full of driving beats and a robust intensity that rocks you to the core.

What struck me was a slightly different sound and tempo – this band has grown noticeably in recent times.

NCV obviously enjoy performing and bringing their music to the masses.

One of the folks that I was at the gig with, who is a discerning judge of metal, said to me that their sound is tighter than when he saw them last year. He added that he felt their vibration through the chair.

I reckon that NCV has experienced an exponential progression in recent times though confidence in their ability and an enacted understanding between each other.

Their playing was blindingly fast and their banter was hilarious, forging a strong bond with everyone there.

Their music set a rollicking pace and rhythm and they weren’t afraid to be who they are.

Their sound was enormous, especially considering that there was only two of them on stage and they engaged the crowd from the beginning.

Their technique was fast and clean and their passion was undeniable.

Many of their songs were short and fast, not wasting any time. I was reminded of Flea from Red Hot Chilli Peppers and of Municipal Waste.

Their sound had a robust punk edge and their percussion was amazing.

They owned the stage.

I was not prepared for the energy that these folks brought.

The lead vocalist capered and prowled through the crowd, revelling in being down with the punters.

This was a set of enthusiasm and espieglerie (French: roguish tomfoolery).

I marvelled at their stagecraft and their dynamic sound, which was delivered excellently.

This was a clear indication of what a coherent band of multiple members can bring. Sometimes having many folks in a band means that their roles are muddy and they trip over each other creatively. Not with these folks – they were an integrated unit. They got the house by the scruff of the neck… and spanked it.

Many times there was a seamless integration of digital and live elements, creating a rare synergy of performance.

My beautiful wife disappeared into the mosh, a clear indication of the compelling nature of these folks.

I was reminded of a Marilyn Manson lyric – “if you’re not dancin’ , then you’re dead”. That is what this band inspired – losing yourself in their music.

Their sound often included syncopated perfection and elements that were engaging. There was also intricate complexity that was eminently accessible.

Then, I looked up and my beautiful wife was dancing ON STAGE! I didn’t know wether to be proud or worried that she was leaving me for metal…

My metal mate gave me this assessment of this band, “Holy shit I danced my fucking arse off! I haven’t felt this vibe since Prodigy.” He also compared them to Hollywood Undead. 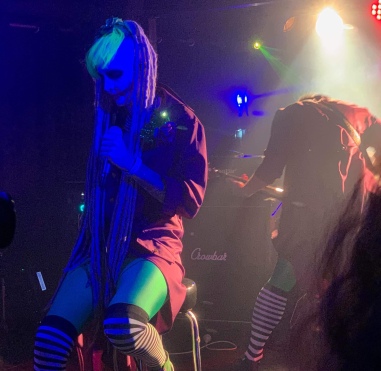 All of the band caught us off guard, because they came on stage in elegantly crafted Joker costumes and makeup. But no joke, these folks are engaging and inspirational.

Their music had a flavour all it’s own – it’s a comforting spice, rich in depth and impact.

Their energy and enthusiasm is undeniable and I marvelled at the voice of the lead vocalist, as she had the ability to tighten the tension, then release it when appropriate.

Their shifts in tempo and pacing were clever and engaging.

My wife left me again to be closer to them. I just have to accept this development.

These folks performed with a slow burn that drew that crowd in. Their sound was one of driving beats, tempered by the odd emotional ones. It was a journey for our spirits. 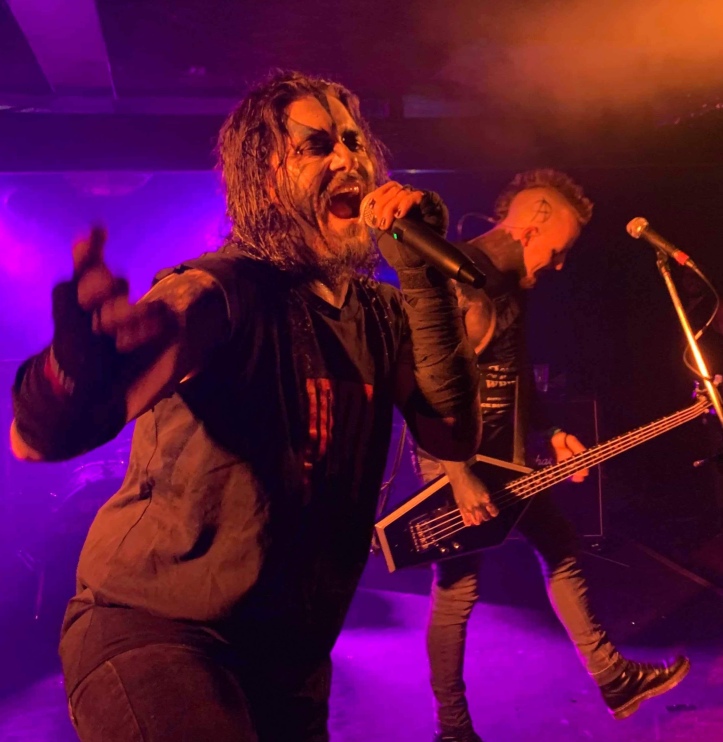 From note one, Darkcell was gracious, but they owned the stage. Their connection to the fans was obvious, as they embarked on a killer set of old and new favourites.

These folks always have our hearts and souls in their hands and they treat them with respect.

The themes of their music are all about being comfortable in who you are – it is inspirational and aspirational. They encourage us to not accept the lowest common denominator.

As always, their passion was on show, for all to see.

I stood as one of The Black Sheep, lost in the music, happy to be among like minded souls. As they launched into “Reign of the Monsters”, I scanned the crowd and they we were all happy to be Monsters.

I looked at the band and at the crowd and I saw sweat and dishevelled natures. It’s gloriously unpretentious and real.

The music was testimony to what a band should be: songwriting that connects to the audience; a clarity of sound with no filler or pretension; musicianship that is intricate and dynamic; and stage personas that are larger than life.

My beautiful wife again scampered off, enthusiastically engaging with the abundant energy that was everywhere.

I was reminded of Queen’s “We Will Rock You”, a song designed to engage the crowd. Every Darkcell song seems to be like that, with our fists in the air at key points, our devil horns on display at others and our middle fingers saluting our majestic disdain for the normal, as we signal our bond as a marvellous collective of freaks.

This was the emotional crowning glory of the evening.

I struggle to describe the Darkcell experience. I am an unashamed fan, because being at one of their gigs, lost in the moment, having everything else wash away, being present in the present, is what they do every time.

Kudos to the organisers for the pacing of the evening and for booking the bands. Each act complemented each other well, with the evening building to a fabulous crescendo. I left well satisfied that I had been a part of something amazing.

But, please give my wife back.