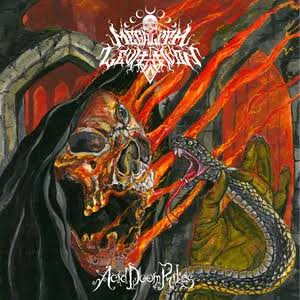 I took a listen to a Russian outfit by the name of Megalith Levitation and their new album Acid Doom Rites. I can’t say I was familiar with these guys at all so I looked them up. I read a description that had their genre described as “stoner/doom metal” and I instantly thought what on earth have I gotten myself into here?
Acid Doom Rites is also described as a full length album which after I looked at the track list left me scratching my head as it’s only 4 tracks. However, then I seen the length of each track and that both explained it and terrified me.
So, a breakdown of each track you ask? Well ok here we go….
“Spirit Elixir Drunkard” had a very different intro almost didgeridoo like and extremely long. The track itself has a runtime of 16mins 19 seconds, which personally was way too long. I mean it’s got interesting parts with some nice guitar work but it got tedious.
“Eternal Trip ( the 4th plateau)” was very similar to the first track in sound. There were some muttery vocals that struggled to stand up against the front driven guitar. I swear this album will be the death of me hahaha this track ran for a whopping 25 minutes!!! I’ve never been a fan of extremely long songs, I struggle with anything over 6 minutes with very few exceptions.
“Acid Doom Rites”, the very beginning I felt like I was in some ancient ritual with the chant like sounds. Then it goes into warp like riffs. Muttery vocals in addition which are in their native tongue. Almost like a slower Rammstein.
“Smouldering Embers(pyromagic)”, I got intrigued by the intro to this track but then was deflated again by the audio length of 23 minutes long AGAIN…. There is some good parts such as some really groovy guitar but again got really tedious for me.
So, in conclusion I’m sorry but I can’t personally rate this highly as it just really wasn’t my thing and no matter how hard I tried to get into it and enjoy it for what it was I really really couldn’t.
I’m sure they will have some fans out there, I’m just not one of them.
2/10
Steph Suter-James.