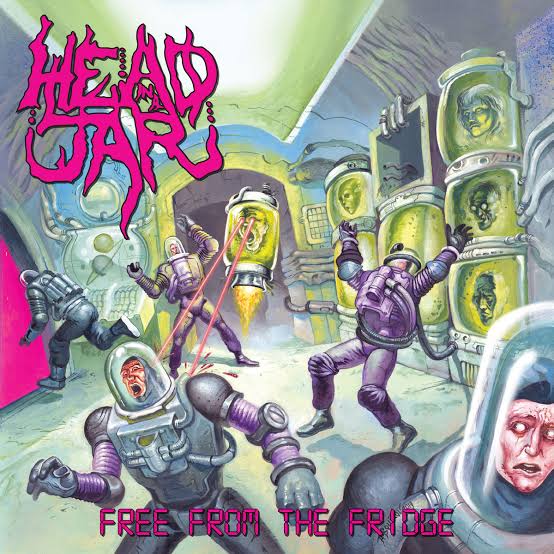 A long long time ago, in a galaxy… Sorry, my mistake, I wasn’t in another galaxy at all, it was Sydney, which is quite like being in a different galaxy at times.  Sorry Sydney-siders, but it’s true…

Anyway, as I was saying, a long long time ago, I went on a road trip from Melbourne to Sydney with a band called Overdrive.  I was managing them at the time, and we headed up so that Overdrive could play a few shows.  One of the shows in question featured, among others, a band called Head In A Jar – Overdrive is long since disbanded, and I couldn’t tell you who else played that night, but I never forgot Head In A Jar.

First impressions last, and they certainly made an impact that night, so I was over the moon recently, when I discovered that the band has just dropped a new album.  Released on April 24th, Free From the Fridge is available on all streaming services, and on YouTube for free.  If digital isn’t your thing, physical copies are available through Bandcamp.

Free From The Fridge is an album for fans of thrash metal that doesn’t take itself too seriously.  That’s not to say that it’s not good, because frankly, it’s fuckin’ great stuff, it’s all just very tongue in cheek – and at just a smidge over 30 minutes in length, it’s time we’ll spent.

Opening with Comptroller of Nightmares, the band deliver an old-school style of thrash metal.  There are plenty of tempo changes and some great screams.  It even has the sort of underproduced sound that all of my favourite music had back in the day.  Of course, a lot of that sound was due to high speed dubbing from tape to tape…

Head In A Jar don’t take themselves too seriously, and good on them for having a good time with it.  Maybe that’s what’s kept them toiling away for so long.  Tracks like Androidz Anonymous and Dess Ünd Hekk keep things rolling.  Musically, the band never let up.  It’s a barrage of lightning fast drumming and riffing right the way through, and that’s exactly what I was hoping for.

Slave to the Microwave might be my favourite track, while Stretchin’ the Friendship is an entertaining look at a situation damn near everybody has found themselves in.  The title track is up next, and although it doesn’t reinvent the wheel, it sees the band continue to play to their strengths.  And there are more strengths than weaknesses.

You will be hard pressed to find a single track that isn’t worth listening to.  Biological Blitzkrieg opens with a full force drum attack, and continues to transport me back to the earliest days of my being a metalhead.  It’s awesome!  Likewise for Kingdom of the Forest Crones.  The cleaner vocal passages are silly by design, but it’s still killer.

Big Punch at Little Lunch is a stomper, You Must Be This Tall (To Die) is strangely catchy, and Betty Vs Yeti will make your brain hurt if you try to keep up with the super fast lyrics.

The closing track is Hell Beach, and this one is a little left field.  It’s more hard rock oriented for the most part, but does jump head first into thrashier sounds often.  It’s infectious and fun.

Free From the Fridge is a ripping good time.  You should take it for a spin.