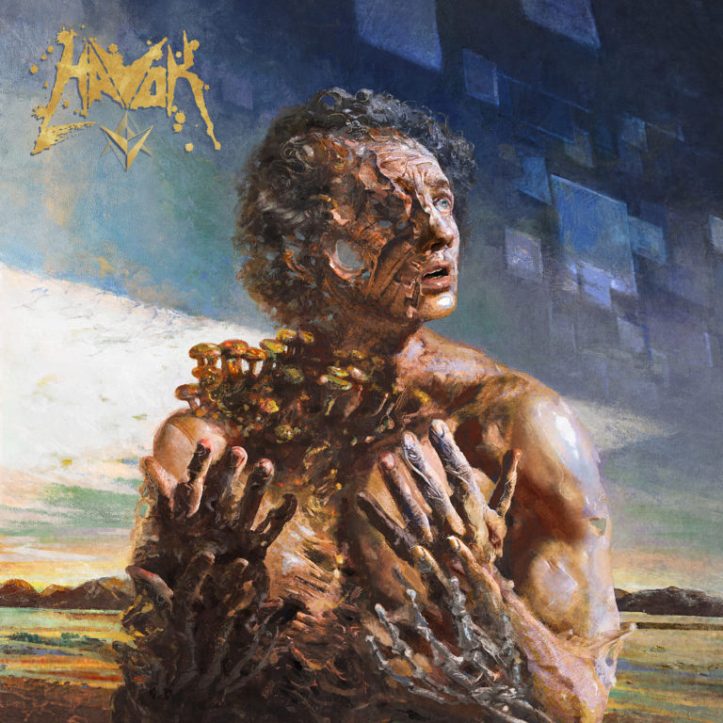 Following up on 2017’s “Conformicide” was always going to be a big job in my eyes – it was easily one of my favourite releases of 2017 – but with a couple of line up changes taking place in the time since, Havok prove that they were up to the challenge, and “V” will almost surely become my favourite of their albums to date.

Opener, “Post-Truth Era” opens with a very familiar sound – it’s unmistakably a big wink and a nod to Metallica’s “Blackened”.  Much like “Blackened” this track bursts forth with a barrage of power, and gets things started in the best kind of way.  The drumming from Pete Webber is so good right from the start, and really is the driving force.

“Fear Campaign” has a tremendously old school sound.  Brandon Bruce’s bass guitar is big and bold, and the lead guitar work is stunning – lightning fast, and simply put, fantastic.  “Betrayed By Technology” has Exodus written all over it.  Not in a rip-off or copy-cat way though – it’s just that there is a clear influence present.  More of that bold bass guitar is on display throughout.

So far, all three tracks have been fantastic, and “Ritual Of the Mind” lives up to them all.  This one goes in to groove territory, scaling down the speed, but certainly no less great.  It has to be said that I love David Sanchez’s vocals, and on this track they might be at peak.  With gang style backing vocals in use to accentuate certain lines at times, “Ritual Of the Mind” becomes a highlight so far.

“Interface with the Infinite” features an underlying groove, with galloping overtones, while “Dab Tsog” is an interesting musical interlude that lets up on the intensity, even if only briefly.  “Phantom Force” fires things back up, and really ups the ante as far as speed and intensity go.  It’s fast and relentless from the start.  Mechanical drumming, chugging riffs and a powerful vocal right the way through.

Next up is “Cosmetic Surgery”, and while it doesn’t stand apart from anything else on the record, it doesn’t need to, because all of the great elements are still utilised – big bouncy bass, wicked solos, superior riffing and vocals that are overflowing with venom and aggression.  Havok certainly play to their strengths.

“Pampsychism” follows, and we’re treated to a gentle opening that kind of leads you astray a little.  Just when you think you might be in for something a little left field, in comes that bass guitar and precision drumming.  This track puts me in mind of early Megadeth, and that can only be a good thing.

As we draw towards the end of “V”, “Merchants of Death” proves to be a late dark horse.  Once again providing all of the hallmarks that have made this album so great, but once again, the amazing bass sound is front and centre for me.  Often thrash metal is very reliant on the guitars, and they definitely play their role hear, but the bass guitar is equally as prominent in Havoks sound.

Album closer “Don’t Do It” starts off light and almost dreamy, but this is an eight minute epic, so you know that it’s going to take us through a number of shifting sounds.  It does just that – the airy intro gives way to a chugging pace that gives way to speed.  Each section is as powerful as the next, and the cleaner vocal style is a breath of fresh air.  Eventually the track comes full circle, and returns to the dreamy acoustic soundscape that opened it up.  Excellent closer.

In my opinion, Havok are the best of all modern thrash metal bands.  If absolutely pushed to pick a favourite album, right now I would still say “Conformicide”, but after just a few more listens, I think “V” will be my go-to.