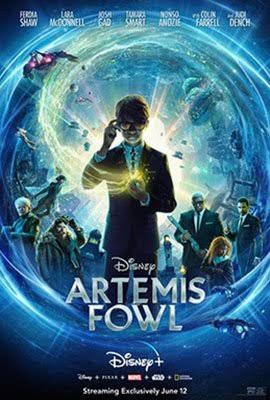 Artemis Fowl, a young criminal prodigy, hunts down a secret society of fairies to find his missing father.

I am not a film critic.  I find that 9 out of 10 “critics” are jaded, and quite honestly don’t seem to like the majority of films that they write about.  I write reviews, not critiques, and I really try to find something to enjoy in everything.

Well, I did something I don’t usually do, and I read a selection of write ups about Artemis Fowl, and frankly, it’s being completely eviscerated by almost everybody.  I don’t get it…  what did these people expect from a Disney film that features an array of mythical creatures…?

Artemis Fowl was not THAT BAD.  I watched this film as a nearly 40 year old adult, with no children around, and I quite enjoyed it.  So maybe it’s not an entirely faithful adaptation of the original book, but it’s rare that that happens in any case.  And I have to point out that I haven’t read the books, so I’m not offended by what is or isn’t faithful…

Basically, COVID killed off any hope that this film had.  Had it been released in cinemas, I’m not sure that it would have done major business for Disney anyway, but the fact that they were left with little choice but to release it straight to their Disney + streaming service, meant that it was a loss from the start.

Is that a bad thing though?  The fact that it’s now “free” to subscribers is what made me check it out.  I think MORE people will see it as a result, which means it could be a second lease on life for this potential franchise.

Anyway, this is a visually good looking film.  With fairies, trolls, goblins, centaurs and a wide variety of creatures in front of them, kids will be mostly captivated by the movie.  And at its core, it is A KIDS MOVIE, so for any of these bitter and jaded “film critics” that feel the need to tear it to shreds – I say get a life.

It’s not the normal style for director Kenneth Branagh, but he does a decent job with the material at hand, and gets good, if not great performances from his cast that features Josh Gadd, Colin Farrell and newcomer, Ferdia Shaw as the titular, Artemis Fowl.

Try to enjoy this for what it is, you might be momentarily distracted from all the worlds problems, and even a little entertained.