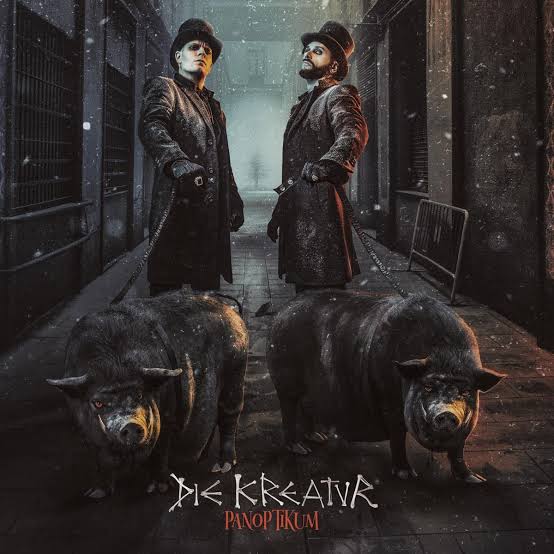 One is an abundantly talented vocalist and musician, enigmatic, stylish, creative, intriguing and charismatic.

The other one is exactly the same.

“Panoptikum” is this collaborative effort’s debut album and it weighs in at 15 tracks, for a duration of 1 hour and 7 minutes. The last two tracks are remixes of tracks from this album.

So, get comfortable – this is going to take some time and it will be a wild ride!

DIE KREATUR (THE CREATURE) burst forth with a funky little guitar opening. Then, the divine madness began. The track was fast and intense – we’re not in Kansas anymore, Toto! The vocals were edgy and the guitar riffs had bite. It abruptly shifted in tempo, generating an unsettling feeling that matched the subject matter. The two voices were used brilliantly, often being used as instruments themselves. The track was often operatic in nature, before the sound of the wind blowing was used as a segway before…

Kälter Als Der Tod (Colder than Death) had me shivering with its ominous opening. It banged from the very beginning and it had me strapping myself in mentally for what was to come. The blending of guitars and keyboards was masterful, as they served to augment the sound without competing with each other – which is what Dero and Chris seemed to be doing… It was strong and unhurried, building abundant atmosphere. The blending of the vocals served as seamless counterpoints for each other. A ghostly choir was used to further the feeling of the track, resulting in an uncharacteristic beauty.

Unzertrennlich (Inseparable) opened with a reverb fuelled, pulsating sound, which then morphed into a techno inspired arrangement that galloped along. The sound then shifted again, to a much less complex one – the creative flair of those involved was plain. There was much less going on in this track. A choir-like sound was used to great effect, before things fell away again. This track shifted like a virus and it’s infectious simplicity had me humming. It closed with a guitar wailing – another splash of intrigue.

Durch Die Nacht (Through the Night) rose with a simple sound, alongside a clean guitar arrangement. The vocals were dripping with quality and the track was again beautiful in nature. Chris and Dero showed that they are not afraid to experiment and that they don’t need to hide behind a wall of sound. The track soared and shimmered, again using the vocals to add much to the experience.

Zwei 100% (Two 100%) used a techno influence to open and it soon added another galloping rhythm. This was another shift in style and intensity. There was lots more going on than was immediately apparent, with guitars, synth and percussion interwoven exquisitely with the interplay of vocals. But just as I got comfortable, there was a tempo change with an operatic backing, then, back to techno. Getting comfortable is a dangerous things with this album…

Schlafes Braut (Sleeping Bride) awoke with a sound reminiscent of a rowdy beer hall – or a pirate shanty. The vocals continued the theme, with the sound being syncopated and bawdy. With a closer listen I again heard that there was much more going on in the background. Like many tracks on this album, it was rich in layers of sound. I then waited for the track to break character – surely the metal explosion was imminent…? But, it continued to swagger onwards, sounding somewhat sad and reflective.

Untergang (Doom) burst forth at a frenetic pace, again changing the character of the album. Guitar intricacies featured all the way through and the stop-start-slow-intense elements made for a new experience. Then, it swaggered along, having me wondering what Die Kreatur was doing here – sucking me in, that’s what!

Mensch/Maschine (Man/ Machine) fired up with a pulsating, machine-like sound. Elements rotated in and out, resulting in a very cleverly engineered track. It’s technological/ robotic feel matched the intent perfectly. However, different machine influences were used, adding diversity to the sound. But, even more brilliantly, the track evolved over time, becoming more organic in feel, suggesting a blurring of the lines between machine and man. It finished with a wail and a screech that had my hair standing on end…

Was Mir Am Wichtigsten Ist (What is Most Important to Me) kicked off with amazing percussion that immediately confronted me because I knew that I would not have the words to describe it. And I don’t. When partnered with the vocals, there was a stark and intense sound. It morphed again to become more harmonic, then was stripped back to bare bones, before the guitars waded in, wailing away, adding much to the sound and experience, as it was the first time that it was used.

Benutz Mich (Use Me) used a sound not unlike Oomph! to open, before falling away to use simpler vocals and less musical elements. It then bristled again with intensity and cycled between those approaches. It has my foot tapping, before closing with a disquieting, scratchy and dischordant musical arrangement.

Glück Auf! (Good Luck) was folk-like, using an odd arrangement and simple vocals. I waited for it to morph, but it travelled along an intense and unhurried path. It was dark and shifting.

Gott Verdammt (Goddamn) arose with radio-like vocals and keyboards like a church organ. Staccato guitars and arrangements were used, along with the signature back and forth between sound, seasoned with a multitude of subtle elements. The church/ religion feel was done well, without taking over.

Goldener Reiter (Golden Rider) rode in on the sound of a breeze and crazy insects. It was an intriguing blend of techno, which looped and shifted. It was soothing and beguiling at the same time with its calm and clean vocals. This was a finely crafted track and the seamless blending of vocals were excellent. The track developed a deeper character as it progressed and I really bonded with it. It was a fine way to end the album proper.

I will leave it up to people smarter than I to describe the remixes and their intricacies. They both took the base track and did what a remix does.

Dero and Chris have combined on this endeavour like any good binary elements, resulting in a chemistry that transformed both base its elements. What emerged was not explosive, rather, engaging and beguiling, fierce and dynamic. This album feels like both of them. They bring similar skills and views, but they are different enough to challenge and enrich each other. But at times it also feels like neither of them, that they have created something new. Their cleverly synchronised vocals served to augment and compliment each other. Often I strained to identify who was singing what. Or growling it. Or, indeed the type of vocal sound that I just heard.

The lyrics were in German, but this does not preclude access to the moods and intent of the music. It had me writing madly, trying to capture what I was thinking and feeling in reaction to what I was hearing. I don’t think I managed it to the level that this music deserves.

This is not just a side project – it is the result of passion for crafting amazing art. I follow Chris Harms on one of the social media platforms. I have seen his endless tweaking of the music, the notes to himself, the diagrams about the music and the enhancements that he has suggested over time. This strikes me as what a mastercrafter does – enhances and improves their work. But, they also know when to stop, lest the work become an overly complex and pretentious bit of twaddle.

I kept thinking that nothing on this album feel hurried. It is rich in its deliberations and intent, whilst maintaining a deep intensity. There were effortless segways in and between tracks and the engineering was inspired. Often elements of percussion, guitar or keyboard would rise up, fade away or feed off each other. I got a sense of cautious deliberation and restraint – this album could have been a mess of competitive creativity – but what resulted was sublime synergy.

I expected the unexpected. I got that with the many different styles that were delivered with style and integrity. I expected magnificent weirdness. I certainly got that.

( You may have wondered how they compare to Rammstein, the lumbering behemoth that casts a shadow over German industrial metal music, deservedly. They share the same house, but not the same room. The same goes for Oomph! And Lord of the Lost – you can mention them in the same breath, but they are different in sound. Rammstein list Oomph! as influences of theirs, as they predate Rammstein by 5 years.

If you’re keen to dig deeper into similar bands to those listed above, I recommend that you check out Megaherz, Eisbrecher, Gothminister, Mono Inc. and Stahlmann. These will fill the other rooms in the metal house that rocks.)