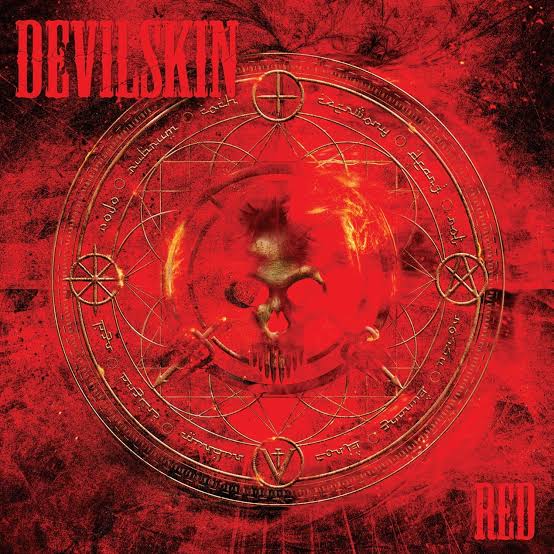 Being an old bloke that has separation issues, I have amassed a collection of 15 bicycles. All have their own character, with some being nigh on unrideable, because their application is so narrow. I usually pick a bike depending on the ride I am planning.

More on that later…

Devilskin are a band from New Zealand and they have been together for 10 years. “Red” is their first album in 4 years and it’s 12 tracks flash by in 48 minutes. Flash by? I got so wrapped up in this album, it seemed to caper by in a heartbeat.

“Do You See Birds” flew in with robust guitars and Jennie Skulander’s vocals growled with disturbing timbre. We’ll be having all the lights on in this house tonight… As a track, it’s a real banger, grabbing my attention and not letting go. Skulander then showed her amazing vocal adaptability, using a clear and powerful melodic voice. It always amazes me when vocalists have this ability, like Chris Motionless. The engineering of the track was first rate, with vocal harmonies adding much power. It was a frantic foot stomper of an opener.

“All Fall Down” rose up with marching and sirens, before the pace slowed a little, resulting in a more soulful sound. Clever writing grabbed my attention, with lines like, “Your heart and souls are hollow.” Tribal sounding percussion and bass added to the intrigue, before a killer guitar solo. The quality and strength of Skullander’s voice was again a highlight.

“Corrode” seeped forth with a heavy blues swagger. It was plaintive, but as tough as Hell. It spoke of a toxic, one-way relationship and it had me hanging off every word. The engineering was wonderful, with a clever guitar and percussion interplay coming to the fore.

“Eyes Red Heavy” was a monster, having as its theme breaking away from what is holding you back and trying to improve your self (no, not “yourself” – “your self”) . Again, it was slower in nature, having an unplugged feeling to create an intensely emotional opening. It muscled up a little, slowly building to become a much more robust beast. It featured exquisite guitar solo work and towards the end the sound fell away into a acoustic version to finish, adding even more to the character of the track. It was soulful, atmospheric and it triggered all sorts of emotions. I felt like having a rest and a cigarette and I haven’t smoked in decades…

“Same Life” was a different being, opening with frantic bass that the guitars then mirrored. The vocals returned to their nasty setting, before morphing back into the clean and powerful mode. Clever shifts in tempo changed the atmosphere of the track throughout, enabling a multitude of characters to emerge.

“The Victor” won me over immediately with an epic feel to its opening. Again, this was a different character. Staccato sounding guitar and bass riffs were used, before the sound shifted effortlessly into a remarkable blending of vocals and guitar.

“Blood and Bone” utilised an echoing guitar effect and it was slow and clean in nature. It then shifted into a more robust metal rhythm. Skullander’s voice was used to build impressive harmonies and at times double kick drumming laid a formidable, yet subtle, foundation. This is a track in which you close your eyes and surrender. Gladly.

“Endo” had an unplugged opening that was slow and emotional. You’re waiting for me to tell you that the track then kicked on. Yep. But this time it was different again to what I’d heard so far. It was still metal at its best, just a different take on it. The lyrics again grabbed me, including, “I can’t shake this, wrapped around my ribs, squeezing my lungs tighter, ‘til I’m out of breath.” Out of nowhere, Satan returned, snapping me out of my reverie. The track wound down with reverb effects and the sound of waves, before being supplanted by single, slightly (and disturbingly) dischordant notes, which became even more disturbing as they abruptly became louder! Quit messing with my head!

“Bright Lights” indeed started brightly, with guitars that sounded like raindrops, before fuzzed guitar took over, heralding the transition into a more metal inspired feel. The track was about overcoming adversity and moving on.

“Sweet Release” opened with background noise and a strong bass line. The partnership of bass and percussion on this track was fascinating. The track built slowly to become a power ballad, telling a cogent and somewhat disquieting tale.

“Be Like the River” flowed forth with clever mixing, with guitar in one channel, before being joined in the other channel by the remainder of the shenanigans. It was groove on a whole other level. The interplay between the vocals and the bass was used to great effect to empower the analogies of life being a river. This was a metal anthem about overcoming adversity and not taking any bullshit.

“Everybody’s High But Me” closed off the album on a high, utilising fast paced, old school punk and a good sense of humour. It was brief and a great way to finish.

Jennie Skullander’s vocals were smooth and powerful – sometimes the voice of The Devil, sometimes angelic, but always amazing. There’s something sublime about a metal band that has a vocalist that can growl one moment and then sing smoothly and powerfully the next.

The musicianship was also first rate, with the guitar work, bass and percussion all blending to create a solid, engaging sound. Each facet got time in the sun, when it was called for in a track. Epic guitar solos, intricate bass lines and atmospheric drumming ebbed and flowed throughout.

Each track had its own character, but each track also had a number of different iterations within it. I found myself looking forward to the start of each track to see what was going to happen and a number of times I was taken by surprise as a track moved in a direction that I was not expecting. It was like adventuring.

This album was about struggle, difficult relationships and having the strength to work on your self, an album of self-renewal. It was also a little disturbing in places, as it wasn’t all sunshine and lollipops. All of that made it relevant to our lives and it means that this album won’t age.

Back to the bikes.

This album is like the bike that I use most often. It’s a gravel bike. It looks like a road bike, but has a bit kinder geometry to make it more comfortable, it has gearing for climbing hills and the tyres are halfway between road bike and mountain bike size. It’s the Swiss Army knife of bikes – it can change character to suit any mood or situation.

This album is like that, with its wide collection of styles, messages and sounds. It goes anywhere and everywhere with ease, taking you along for the ride. And what a ride it was!