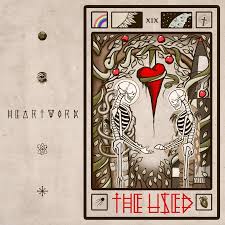 Heartwork is the 1993 classic album by Carcass, OH I’M SORRY! It’s also the name of the new album by The Used.

With it’s universe/tarot influenced artwork, which is really rich with visuals and symbols of the cosmos, we can be satisfied with what’s to be heard. Opening up with the pretty catchy Paradise Lost, ( isn’t that a band?) a poem by John Milton, there’s good vibes in the air.

Blow Me( don’t take it literally) follows up and this one packs a punch. Riding the edge of alternative metal with essential groove and sturdy rhythms, this has a crust of attitude. That breakdown is an instant classic and brings back the 90’s. BIG, WANNA BE mellows out and is a calm, slow track, only at number 3? This one could of been saved for later down the album.

Bloody Nose opens with an awesome scream and the pace is picked back up. It’s a streamlined track, mentioning what’s coming. So, this album is a bit hoodoo juju with it’s subtle mind reading nature in lyrics and artwork.

Wow, I Hate This Song – well, if you don’t like The Used or being used, abused, YES, you’ll hate it. It has a hardcore undertone with it’s chorus ( it’s pretty damn cool), and melodies/synth. If that isn’t your taste, yep, you’ll hate it.

My Cocoon( during these times, that’s where we feel) well, this song has a soothing bassline, that synth and, well it’s clean cut and relaxing. Ballad anyone? Nope, there’s a twist to something, weird. That weird thing is, My Cocoon is short and bleeds in to Cathedral Bell, which is very quirky, trance pop. MESSES WITH YOUR HEAD!

1984 (infinite jest) is another interesting track.  It has a Korn vibe and is quite experimental. Gravity’s Rainbow – well, the opening is like going to a carnival, then it breaks down into a METAL passage, to mellow out to a bass lead light rocker, the metal comes back when needed.  This Rainbow is beautiful and you’ll be pulled in.

Clean Cut Heals is a standard pop/hippity hop track. It’s generic like most mainstream overproduced stuff. It can work as a house track, the sampled bass is pretty funky, but compared to the REAL deal rock n roll/metal, this is shit ( but it’ll have its fans, why wasn’t this called I hate this song).

Heartwork, a great song by…. HA, won’t fool me or you again. Ok, The Used’s Heartwork is, not good, it’s a spoken word track, with tunes that you’d use in a cosplay video. Thank good-mess it’s short. So, there’s some filler and, damn, some of the same old garbage.

The Lighthouse, yes, it’s light and another house esq track. Samples galore, rave time, yawn. Obvious Blasé, now this is a song, a radio jam, a song for a day out ( in our case in) Back to the norm here, it’s a breath of fresh air.

So The Used uses their time to do something different, even though it’s cliché, but listening to those filler computer made jingles is actually a worthy wait for Oblivious Blasé(Featuring TRAVIS BARKER) so, it’s very special, the previous track featured Mark Hoppus. Damn, the drumming in Oblivious is beautiful, the rolls, the precise timing. This track on a whole is a stand out, damn good song to make you feel good and you will be observant. Playing with magic is the key line.

Oh fuck, The Lottery wins with it’s 90’s early 2000’s alt metal opening, then punks out. Alt punk, with a congo drum measure. Ok, the album is two faced, the pop/house/trance stuff will be heard as evil by the rock fans, and good by the trance fans and they’ll hear the rock as evil and. See what I’m getting at? It’s the ying yang. Holy shit, that BREAKDOWN in the vein of Korn, again. Time and time again we get greatness, and this album proves all is worth the wait, pain and endurance.

Darkness Bleeds, FOTF instantly continues that feel good rock, but it’s like a Prodigy song. They fitted in well for both the rock/metal and dance scene. The Used are doing it good too. To feel something, yes, and the many emotions of this rollercoaster wakes you up like a good coffee.

This light end to the album hits the right spot after the hard knocking tracks after the lacklustre busters, after them good tracks. You’ll feel many different reasons to buy the album, skip what you don’t like and turn up what you love.