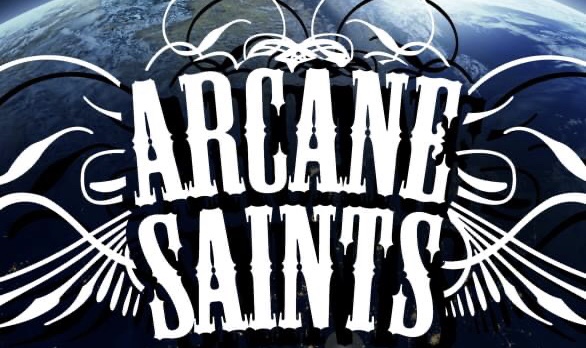 Arcane Saints are a mainstay of the Australian rock scene.  While many other bands have come and gone, Arcane Saints have been around for over a decade, and stayed true to themselves in that time.  There have been line up changes along the way, but each change had lead to growth within the band, both as people, and within their music.

With several EPs, a handful of singles and one full length album under their belt, the bands current, and arguably most solid line up, consisting of Mike, Tim, Sheep and Dec, are well and truly in the throws of working on their next release – a full length album.

When frontman, Michael John contacted Noise Pollution recently, and offered the chance to share the first sneak peak at material from the album, of course we jumped at the chance.  My relationship with the band goes back at least 10 years (Mike was the first artist I ever interviewed), and to collaborate on this, I brought long time fan of Arcane Saints, Sonia Donabella onboard.  In a pretty cool tidbit, Mike was not only my first ever interview all those years ago, he’s now Sonia’s first interview as well.

Even for a band that has had the opportunity to record and tour overseas, Arcane Saints still have challenges to overcome.  According to Mike, one of the biggest challenges, is geographical.  “Living in Australia is our biggest challenge, due it’s isolation and the lack of radio support here. Small population too.” But even with that in mind, he remains grounded enough to appreciate the wins, going on to add “it makes any hard fought victories that much better, due to the constant challenges. It’s a hard slog, no doubt about it.”

While the music that Arcane Saints make is completely serious, they don’t take themselves too seriously behind the scenes.  “My favourite part (of being in Arcane Saints) is joking around with my band mates in the rehearsal room or seeing people enjoying themselves at a show.”  All joking aside though, band life has its challenges, with Mike acknowledging that his least favourite part of playing in a band is the exhaustion that comes with trying to balance being a musician and adulting. Adding that the stress of trying to find money for recording and touring is hard too.

When we asked Michael about Arcane Saints biggest achievements, he listed “Playing the last Big Day Out, sharing USA based management with the likes of Bumblefoot (Guns n Roses) and Trapt, touring the USA and China were all highlights.” But goes on to add that “overall I’d say still being around for over 10 years is our biggest achievement.” As far as things they’d like to achieve in the future, Arcane Saints have a singular focus right now.. “releasing another album and being proud of every song on it.”

With the new album on the horizon, we pointed out that it had been 5 years since the release of the bands last EP, In the Shade of the Juniper.  “Shit has it been that long?!” Yes, yes it has, but Michael is quick to point out that it hasn’t been five years of complete inactivity.  “Well we have released three new singles since then. We have done some interstate shows but no international touring as some of us are still paying off our USA tour from 5 frikkin years ago haha (true story!) To be honest we have slowed down a lot compared to back in the day when it was just go, go go. I have been at risk of total burn out a few times with trying to juggle working full time, studying a degree, my martial arts training and the band. I’m thankful to the other guys in the band for understanding this.”

At this point in time, we shift gears, and start to dig for information about the upcoming album.  With the current Covid-19 pandemic putting a stop to touring for the time being, we had to wonder whether Arcane Saints would be delaying the new record until they can launch it with supporting gigs.  As it turns out, the current lockdown laws have halted, not only potential launch shows, but the recording process as well.  “It will hopefully be out this year, unsure about any launch shows yet. We still haven’t been able to finish recording the album due to the lock downs.”

Mike remains coy, when we pushed for an album title, but did reveal some details about recording.  “We are working with producer Shane Rae at the infamous Lighthill Studios. We love going out to Riddells Creek and recording amongst kangaroos haha. The album will have nine or ten new songs on it. In my opinion the songs are our best to date. We are using more dynamics and space in songs now. We have become better songwriters as you’d expect over time. The recording process has been much more relaxed and organic than when we recorded our previous album over in Nashville. There won’t be as many musical layers, it will just sound like four guys in a room.”

As he reveals, there is not any set formular that Arcane Saints follow when heading in to the studio – “The usual process is I will say “Hey guys do you have any new stuff we can work on?” and they will say “Nah”.

So I say “Ok….” and then bring a song to the table that is pretty much structurally finished. We will jam on it and the other guys will make their own suggestions to improve it. We usually try out any idea that anyone has to make it better. They then add their own parts to the song.” As far as musical and lyrical inspirations are concerned, in Mikes own words, “It all comes from my really weird brain. There’s always heaps of crazy shit going on in there.”

The upcoming album will feature all new material, in order to stay completely fresh, and when we asked what the musical direction is, the response was “I’d say the album is more pop rock than our previous album or the Juniper EP, but still manages to be dark as fuck in some places (due to my aforementioned really weird brain). We don’t really make a conscious decision about what style or direction we are heading in. We just like change and don’t want to sound the same all the time.”

So even without a title, or a release date set in stone, we Arcane Saints fans have something to look forward to.  As for Mike, until the band can resume the recording process, he’ll be “Standing 1.5 metres away from people and being confused about what I am allowed to go out for. I’m going surfing tomorrow, does that attract a $1600 fine? Fuck knows. Thanks for the chat my friend!”

Join us now, as Michael John picks up his guitar, and gives us a very special acoustic performance of one of the albums tracks, 2AM!