Well, there’s something strange in our neighbourhood and it surely isn’t good. Due to the MASS HYSTERIA and feeling like it’s judgement day, as a SPECIAL, I figured I’d retrospectively review Ghostbusters.

Not just the original, but as much of the franchise as possible.

It began in 1984, through a Saturday Night Live sketch -leading to the 1st film. A trio of Paranormal Psychologists are evicted from their university and go into business for themselves. Their first assignment is a visit to the library where they encounter a full apparition of an elderly lady ghost, who scares them off as she turns into a fiendish banshee. After getting a mortgage and acquiring a good sum of money, Ray, Egon and Peter ( Dan Aykroyd, Harold Ramis and Bill Murray respectively) buy an old firehouse and gradually turn it into the Ghostbusters HQ.

People soon have ghost, ghoul, spectre, spook and Samarian demon dog trouble. Dana ( Sigourney Weaver) becomes the GB’s 1st customer after her spooky visit from one of the franchises best characters, the dog. Peter investigates the apartment but, nothing. Ok so far we’ve seen some great effects for 1984, the film lost out to Indiana Jones & the Temple Of Doom, which is sad as that film, some effects are a bit rough, especially the projection/green screen composites.

The stop motion of the hell hound is fluent, the puppetry is amazing, like the mastery of Stan Winston, and Slimer ( called onion head) is a standout effect, no cgi, just a performer in a torso suit who was taken out via groundbreaking effects. It’s pretty seamless, the proton beams are just as great as lightsabers and that sound is one of the most memorable in film.

So, the crew encounter Slimer and we get a montage, all builds up to the classic showdown between Gozer and Stay Puft Marshmallow Man.  Again, brilliant use of costume and miniatures in the climax and a whole lot of shaving cream for the melted marshmellow. 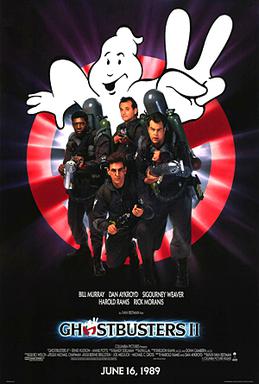 Ghostbusters 2 followed in 1989, it’s a fine sequel, more horror based than the dark comedy of the original.  The story is similar, the effects are still great and there are some genuinely frightening scenes – the subway, Yanosh stealing Dana’s baby and Vigo is intimidating. Over time the film has gotten respect, it’s superior to the ill-fated remake from 2016, Ghostbusters: Answer The Call. 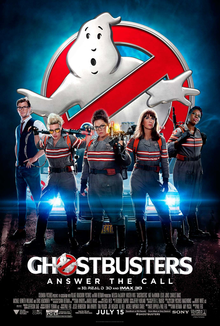 The supposed 3rd film can be seen in the 2009 video game’s manual, as it states it’s essentially the 3rd movie.  The game is amazingly fun but frustrating.  It was the last GB related work for Harold Ramis, who passed away in 2014.

There were also two animated series, one which continued the story after the first film and a new generation later on. There was other games based on the film but many are very bad.  There’s even Ghostbusters lego!

Dan Aykroyd reprised his role as Ray in the 1995 hit Casper. In 2019 there was a teaser for a new Ghostbusters film, then after waiting, confirmation it’s a SEQUEL to the original films, with most of the original cast returning. It’s delayed until March 2021, no thanks to this Covid 19.

Ghostbusters is a great franchise, with many outstanding moments and is quite quotable.