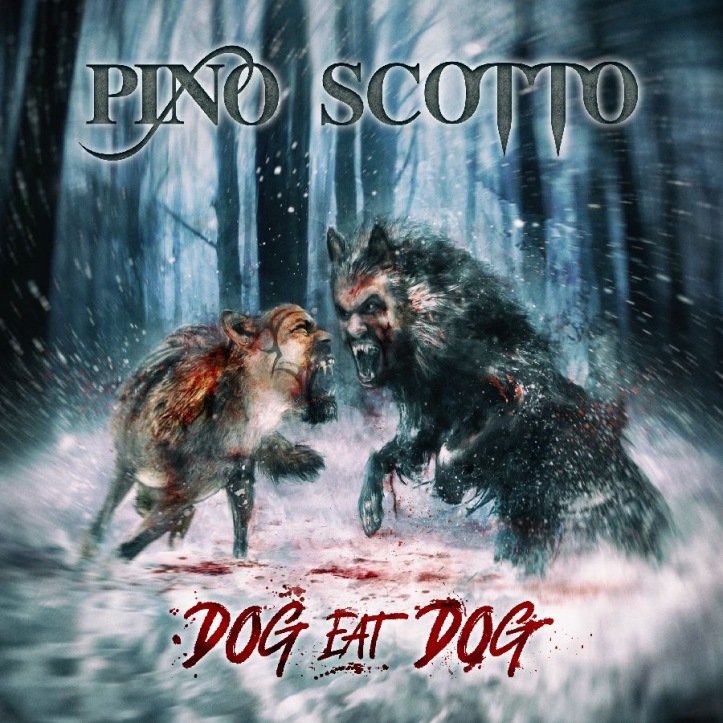 Pino Scotto the lion roars again. Dog Eat Dog will be released on March 27th and will make happy the many fans who have been following it for a long time, including myself.because besides being a friend, Pino is that Italian artist I’ve always listened to since I was a teen.

Pino Scotto is back in top form with the new album “Dog Eat Dog”, an album different from the previous ones, after all we say it every time Pino releases a record, he’s like that, he loves to differentiate himself in order not to fall into boredom, always attentive to blues harmonies and with the grit of heavy rock.

“Dont’t Waste Your Time” is what I consider a classic piece by Pino Scotto, rock’n’roll, passion and a scratchy sound accompanied by an excellent melody that once again marks his presence in the world of rock and not only Italian. Such a great opener.

With “Not To Late” he shows us his most aggressive side. Brilliant track with a good hard rock atmosphere, with guitar virtuosities and Mauri Belluzzo’s excellent keyboards. Very good also the rhythm section thanks to Leone Villani Conti on bass and Federico Paulovich on drums with a particularly seventies sound.
“Before It’s Time To Go”, the hoarse voice of our Pino Scotto makes his way in harmony with blues notes played by Steve Volta’s guitar, a great song, melancholic and enveloping as an embrace.

The following “Right From Wrong” is an almost crescendo song that focuses more on the melody with passages between excellent riffs and vocals.

“Dust To Dust” proves that this album is a continuous surprise, a piece that travels in a classic rock with a beautiful guitar that reminds in some moments a prog sound of the 70’s. A song with a very strong power that manages to convey high sensations,  it’s not for everyone and songs don’t always manage to create synergy with the listener. Highlights of the song Mr. Paulovich’s tight drums and Steve Volta’ guitar. Hat’s off!

Here’s the title track, “Dog Eat Dog”, a naked and raw song, a classic rock without frills, rough and impactful, musically impeccable piece with Pino’s voice always excellent and gritty, always up to the mark and impeccable.
In “Rock This Town” sounds vaguely 70’s, reappear in a bright modern light and with with a really good ending. In this piece I imagine Milan, a city that is well mirrored by rock, that adapts to the frantic Milanese rhythm. The city chosen by Pino to live and work.

Sax in “One Wolrd One Life”, a sound that travels between the 70s and 80s, always with style, between melody and rock tone that fascinates, always.

“Talking Trash”  is another fascinating track with a very good bass line in evidence, the rhythm of the drums, always in tune, the lashing guitar.
“Same Old Story” excellent bass and drum intro that develops tightly together with guitar and vocals. Pino’s voice that always manages to hit any song he can sing. A hybrid piece between blues and rock with shades echoing the 70s.

Who remembers Vanadium, can only feel a little nostalgia listening to “Don’t Be Looking Back”, track included in A Race with the Devil, the second album by Vanadium, released back in 1983. One of those pieces that can be of absolute modernity, perhaps Pino with Vanadium was also at the forefront in Italy.
“Ghost Of Death” Ghost Of Death has the honour to close the album and he does it in a powerful way, excellent proof that our Pino Scotto still has a lot of grit, or rather never lost it. Piece of absolute heavy rock that remains one of my favourite tracks of “Dog Eat Dog”. Solid, rocky and without half words, like Pino himself.

This album adds to my personal album of memories, which like every Pino album, accompanies me in various stages of my life. “Dog Eat Dog” is part of my soundtrack in this period of forced seclusion for Covid19, I will remember it as the record that marked this evil year, I will certainly remember it with affection for the positive force that Pino Scotto has always transmitted to me, both musically and as a person.

An honest and sincere man, outspoken and with a big heart, a true rocker.