When 4 out of your top 5 Oz rock artists of today are playing under the one roof together at short notice, one simply must drop everything and go! And that’s what I did! Almost a dream come true couldn’t be missed!
I was going to drive to this gig with my partner in crime, Nikki 666, but after another long week at work and with this cracker of a line up, I just wanted to let my hair down a little and I could hear my friend, Jack Daniel calling my name so we decided to cab it instead!

With an early start of 7pm, and being over an hour away, I had to make a few sacrifices, (ie. skip dinner, skip shower-I did spray a can of deodorant all over), to get there on time to see the opening act, the super human that is Dellacoma Rioperform a stellar acoustic set (first time on an electric guitar!), consisting of a mix of originals and covers and he nailed it! Just WOW! That beautiful, heavenly voice is the star of his performance that never fails to give goosebumps all over.
Highlights new tracks the simply divine, Leave a Light On and Lady Undertaker, the Dellacoma classic, My Kinda Woman, Stir Crazy, one of my favourite Sunset Riot songs (Del’s old band), and a wonderful rendition of Simple Man.
Del is one of this country’s most hard working musos being involved in many projects and was awesome to catch up with him and see him play after a long while. 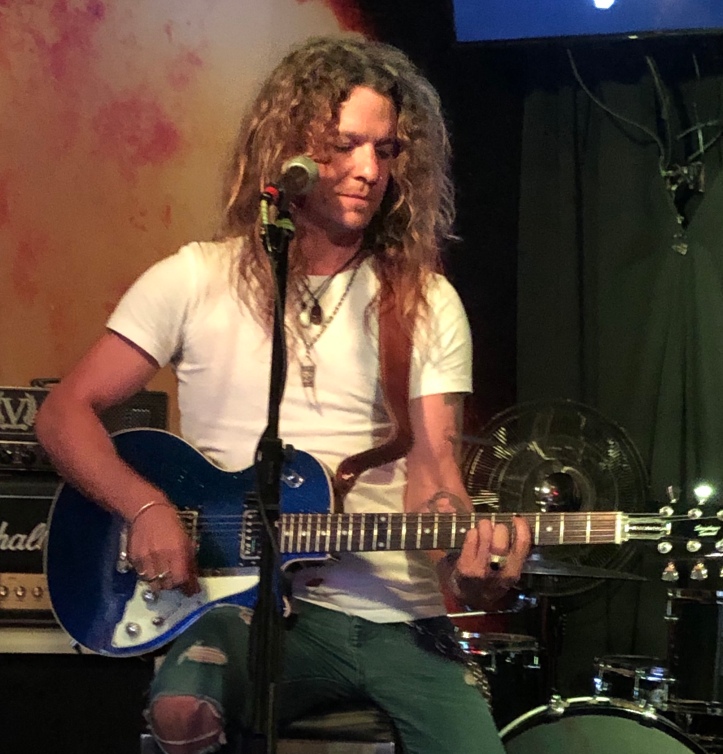 What a scrumptious starter to the night.
Up next my favourite band from Sydney, Kvlts of Vice exploded onto the stage and delivered yet another exuberant, power packed set of dark rock ‘n’ roll playing all the crowd favourites, and once again frontman, Jordan commanding the stage like only he knows how with his brilliant showmanship and that mighty voice, WOW! whilst never overshadowing the rest of the band who had their own charismatic charm thing going on.

Another WOW!
Highlights The Golden Line, Vendetta and

The Devil You Know.
New addition keytar player, Mishka has fitted right in and I’m loving the direction this band is going.
Kvlts of Vice have one of the strongest stage presence and crowd interaction I’ve seen in a band in a long time. They ooze sex appeal and are so much fun, and with that a delicious entree was served.

My hunger levels were still quite high by the time one of my favourite Melbourne bands, Warbirds hit the stage. First time I’ve seen them in a while and WOW oh WOW! A high quality band delivering a high quality performance just as I expected. They put on a powerful show with a huge, heavy sound and melodic tones, playing tracks mostly from their Order of Chaos album with a few older favorites thrown in. I know I’ve said it before but Anth’s emotive vocals are a stand out, giving me chills every time and he’s a great a guitarist too.

Highlights were the opener and catchy, Reality Check, Slave, the current single, Freak in the Night and the crowd favourite, the brilliant ballad My Symphony which I was thrilled to hear and it went off the charts!
A tasty main course was delivered and devoured, left me licking my lips for more.
Last but not least, another of my fav Oz Rock bands of today, Ragdoll from Perth bounced onto the stage delivering a tight set of catchy, melodic guitar driven hard rock. WOW! WOW! WOW! I’ve seen this trio a couple of times before and once again have proven that they are one of Australia’s best live, world class acts.
Guitarist, Leon is a ball of energy, I don’t know what he’s on but he moves like lightning on stage, jumping around and almost doing the splits, he’s so fast it was hard to get a clear shot!

Highlights Tell Me, my favourites Shine and Love on the Run, (guaranteed to be stuck in your head from the moment you hear it), and Break You. They also played their current singles, Rust and Follow the Leader which were awesome.
With Leon’s flamboyant style and fantastic guitar playing, Ryan’s superb vocals and bass playing, and Cam’s great drumming made for a very entertaining and immaculate show.
A dessert rich and decadent was gobbled up leaving my appetite totally satisfied. 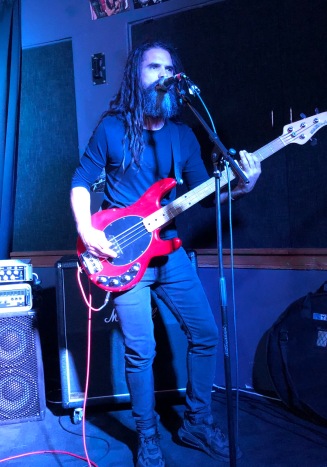 With the night ending earlier than expected due to some special guests not able to turn up, MC for the night, Kym Britten from Dangerous Curves rounds up guitarist, Odin from Kvlts of Vice for a karaoke styled version of Van Halen’s Panama for a bit of fun. A small, delicate cheese platter was served to end the night. 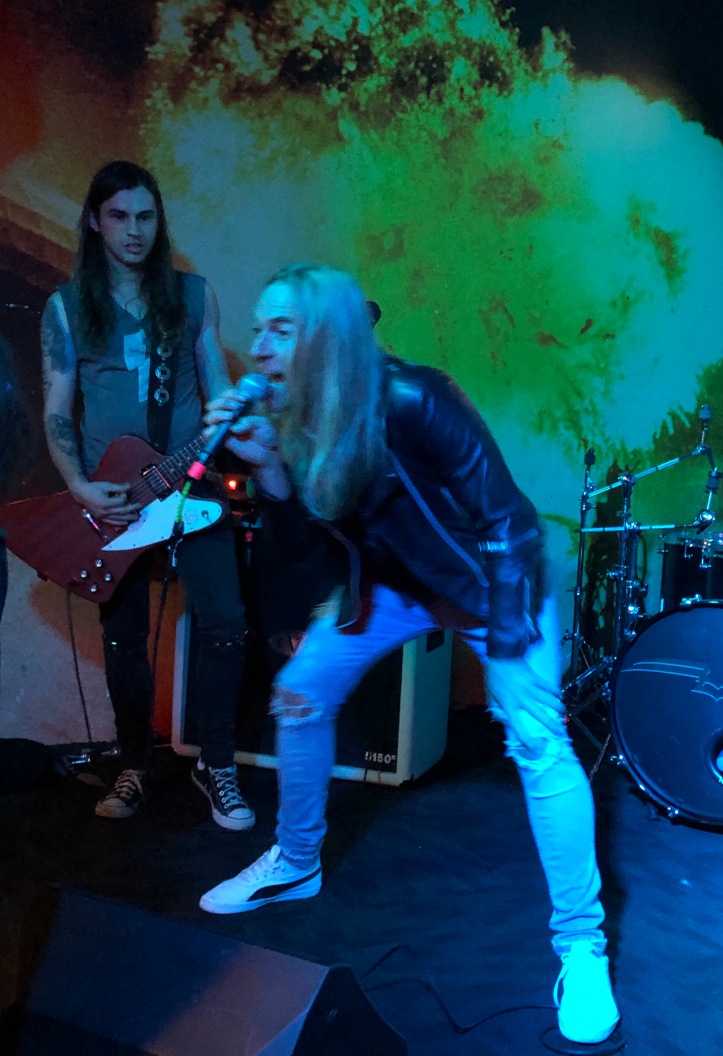 I was up front for all 5 courses of this magnificent banquet I feasted on, washed down with quite a few Jacks, bopping, singing and head banging away, so glad I skipped dinner as I filled up on the brilliant display of talent that was unfolding before me.
This old chook’s body pulled up tired and sore the next day, but was worth every ache. To say I had an amazing time is an understatement!
In closing I would like to point out that this show was put together within 24 hours, after the cancellation of Friday’s session of the Melodic Rock Festival to help out bands that were suppose to play and disappointed fans alike, particularly those who came from interstate. 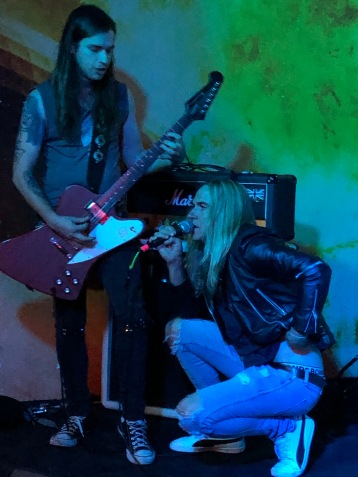 I would like to say a huge thank you to Krunch Entertainment from Perth, Kym Britten from Melbourne, (Geelong) and all involved in the organisation of this event for doing such an amazing job at last minute and thank you to the venue, Whole Lotta Love Bar for taking it on at such short notice.
I felt a bit emotional throughout the night given the circumstances surrounding this event, it was amazing to see the local music community band together to help out our great rock bands in time of need.
The room was full, the bands rocked, the bar service was brilliant and everyone had a sensational night, one which I will be savouring for a long time to come.
Apologies for the overuse of the word, WOW! but the whole night was just that! WOW!
-Sonia Donnabella.