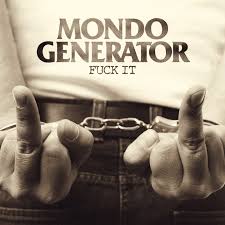 Mondo Generator have been around for a while so I read (honestly had never heard of them my bad). Apparently 8 yrs between records and now they have dusted everything off and released Fuck It.
Their sound has been described to me as a mixture of speed rock, American punk and hardcore. There was also some comparisons thrown around of being similar to Black Flag and Dead Kennedys but I dunno you can make up your own mind if you are still mad enough to check them out yourself after the bashing they are about to cop from me.
This was by far one of the worst albums I have reviewed to date, sorry guys but I struggled to find things I liked about this album. And listening to all 14 tracks was excruciatingly painful, I’m not even sure why 14 was a bonus track. A Bonus what 3 mins torture?
There was only one half decent track on the album and that was number 3 Kyuss Dies!, it had a cool Bassy intro, nd the only track where I could tolerate the vocal without thinking my ears were about to start bleeding. If they would of kept this sort of sound throughout they would of ended up with a much better review.
Some other tracks had some ok sounding music behind it so the makings were a quarter of the way there but that vocal. That vocal just killed it and not in a good way, to the point where I can’t even break down each track for you cos all you’re going to get is “hated it, it’s shit, boring, inappropriate, Hated it”, and there is no joy in that.
That’s all your getting from me on this one, listen at own risk.
1/10
Steph Suter-James.