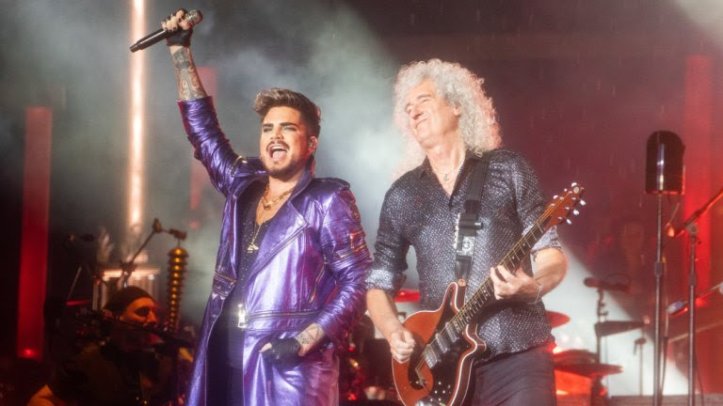 The night started out mighty poorly. Got off the train to torrential rain with no umbrella and no poncho which dampened not just our skin and clothes but also our spirits. However some glimmer of faith was restored when a total stranger beside me grabbed me around the shoulders and dragged me under her umbrella and said “it’s ok we can fit 3 under here, you poor thing”. After such kindness I thanked said stranger then took a detour to the fuel station to get a poncho. The wife and I found one and made our way up the packed walkway to Suncorp stadium to see Queen and Adam Lambert.
Waiting in line in the pouring rain was less than ideal infact both of us looked at each other and said if we hadn’t spent so much money we would of just went home.
Finally making it inside the stadium we found our seats and for once I was glad we got the cheap seats cos we were high and dry. The poor buggers that got floor seats sat in the pouring rain all night.
Anyway I’m dribbling on so, the concert itself you ask. The stage set up was good, however I felt that the screens weren’t big enough for the venue. Even with my glasses on I struggled to see most of the performance properly and I wasn’t the only one the bloke beside me even pulled out his binoculars. So that was one thing that didn’t impress me much. That being said the guys didn’t fail on the sound and their talent that’s for sure.
The old guys have still got it, Brian May’s guitar work could well and truly rival some of the young guys today the man is legendary same with Rogers drum work. The only think that I didn’t enjoy and yes you can scrutinize me all you like is the Guitar solo of over 7 mins that Brian did, for the first 2 mins I thought it was cool but it just dragged on and on and on I felt like it was never going to end, and I wasn’t the only one feeling that way as I heard a few people around me including my wife say the same thing. It almost felt like they were that far ahead of schedule that they had to fill it with something.
Being a Queen fan for many years I really appreciated all the classics they played from Bicycle Race to We will rock you, it was all there.
Even as Adam Lambert said himself that evening “let’s address the elephant in the room” that he is not Freddie Mercury. Well no he is not, however Adam has an amazing voice and that man can hit some notes I tell you what. He was the perfect fit to fill in for the late Mercury. The entire evening featured clips and what not of Freddie which really made it feel like he was still a big part of the show which was a fantastic touch.
All in all it was a great show and despite the rain it was a good night out.
Steph Suter-James.