Band of the Month: The DieCasts/The Quaters

Band of the month double header:-

For this month’s feature I’ve decided to do a double header, as both bands produce music within the punk genre, are good friends with each other and play a few gigs together.

The DieCasts are a 3 piece from Melbourne who have been around the local circuit for about 8 and a half years now.

The brainchild of guitarist/singer Timothy Burton, they burst onto the scene in 2011 playing their first ever gig supporting Calling All Cars of which I was there for. After a string of gigs over the years with support roles including 28 Days, Twelve Foot Ninja, Trial Kennedy and Dallas Crane to name a few, they landed an opening support for Tim’s biggest idols, The Living End on their Traralgon leg of the 2017 Staring Down The Highway Tour. In early 2018 they opened up for Jebediah in Melbourne (Chelsea Heights show).

The DieCasts sound can be described as rock with other influences mainly from pop to punk, but can have little notes of country, jazz, rockabilly and more.

After going through a couple of drummers, the line up consisted of Tim, Tom Jackson (bass) and Jesse Moss (drums), but after the departure of Tom in December, the band has just recently added a double bass player, Ash Stanfield which should create an awesome new dynamic.

Following on from their 2014 EP, Getting out of Dodge, the DieCasts released their first full length, self titled album last September.

Recorded, mixed and mastered by Tim Smythe at One Punch Records, the album was tracked live, (to a  degree), giving it a “live feel” and a more genuine and natural sound with a little rawness around the edges, which I prefer  over being too polished.

The album consists of 11 tracks that display an array of influences that has moulded the DieCasts sound over their years as a band.

Two of the tracks were initially on the Getting out of Dodge EP and have been re-recorded for this album, namely Bad Dream Girl, and Howling at the Moon which features Zac Connelly from The Controllers and Rival Fire as a guest vocalist.

Filled with upbeat, well crafted tunes that contain effective guitar tones, and infectious riffs, hooks and grooves throughout, it’s an easy and pleasurable  listen that will have you addicted from the start.

The single and opening track, Time and Space has a western, punkabilly vibe to it and it’s about going out doing whatever it is you want to do but eventually your commitments be it family, work etc decides for you.

My favourites are Running with the Wolves, Walk Amongst the Dead, Staring at the Mirror and Rainfall, which I also feel are the best vocally. All tracks are catchy enough that will have you singing along to them in no time and stuck in your head for a long time.

I’ve known the DieCasts since their inception and it hasn’t been an easy ride for the band, however it has been a pleasure to have watched them grow and develop into what they are today, especially their creator, Tim.

Now with the addition of a double bass player, I believe it’s exciting times ahead for this trio and I look forward to what they will come up with next.

If you like your punk rock with pop sensibilities and a hint of rockabilly, check out the DieCasts.

Listen to The DieCasts album here:-

Watch the video to their single, Time and Space here:-

With a name like The Quarters you would be forgiven to think they’re a quartet, but no, they are a rock/punk rock trio from Melbourne.

They formed in 2005 and made their mark on the scene in 2007 when Grinspoon chose them to open the Breakout Music Festival in Melbourne that also included The Butterfly Effect and Little Birdy on the line up. Supports to Operator Please, Airbourne and The Getaway Plan on their East Coast Tours followed in late 2007/early 2008. In late 2008, they supported You Am I in Melbourne.

After a couple of drummer changes, current line up as from 2016 are Christopher James Olivo (vocals/guitar), Stephanie Jane Suriano (vocals/bass) and Braiden Mann (drums).

Live The Quarters really pack a punch with their tight and dynamic sets of hard, fast paced, in your face rock and roll tunes full of punk flavour.

After the release of some EP’s, most notably 2011’s Tik Tik Boom, The Quarters released another EP in January called Chaos.

Recorded by Jez Giddings at Hot House Studios, the 6 tracks were recorded live which has captured the raw energy of the band and the strong chemistry they have on stage is evident on the record as well.

Vocals are shared by Chris & Steph and blend well across the EP. As the name suggests, Chaos is a chaotic, manic and frenzy noise feast of fast, hard hitting, blow to the face tracks with heavy riffs and a touch of groove.

My stand outs are the single and title track, Chaos, which is the heaviest on the EP, Bottom of the Bottle where small pockets in Steph’s vocals for some reason reminded me of Chrissy Amphlett from the Divinyls, and the closing track, All My Friends which has a gloomy feel to it. 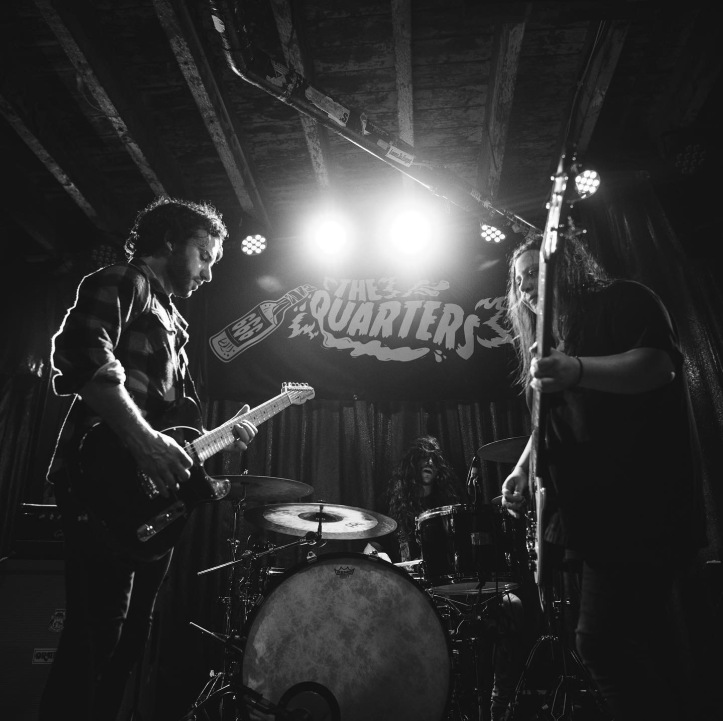 If you like your punk rock hard, fierce and intense, check out The Quarters.

Watch the clip to the single, Chaos here:-