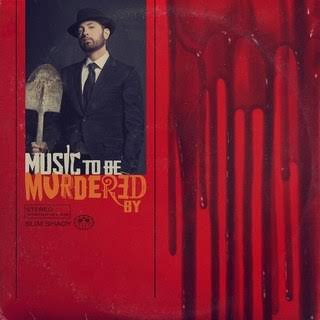 Manic, fun, interesting, unhinged, unsafe, and anything but pedestrian.  That’s Eminem for you, or at least it was once upon a time, and just might be again in 2020…

Where as his last few albums haven’t really done a great deal for me, there was a time when I thought The Marshal Mathers LP and The Eminem Show were nothing short of brilliant.  Music To Be Murdered By shakes off a great deal of the R&B flavour of Slims last few records, and reclaims a good helping of that manic nature of his earlier work.

As the album opens with Premonition, Eminem talks about the love/hate relationship that critics have with him, of course it’s done in a way that only Slim Shady can do it.  Say what you want about his lyrical content (it certainly won’t appeal to everybody) but you can’t deny that he has a very unique lyrical style.

Throughout the album, there are a host of guest appearances from Eminem’s friends, such as Young M.A, Royce Da 5’9, Juice WRLD,  Anderson .Paak, Skylar Grey and evening Ed Sheeran.

Produced by Dr Dre, The Alchemist and Eminem himself, the album is full of great beats, a lot of which throw back to the earlier style of Eminem’s work.  Each beat perfectly compliments the song that it accompanies, particularly on “Those Kinda Nights”.

Don’t go in to this album expecting the pop leanings of the last few albums, and if you’re easily offended, run for the hills – the album is called Music to Be Murdered By after all, and it features all of the offensive and savage hallmarks that put Eminem on the map.

Listen to Darkness for a taste of Eminem’s brilliance.  It begins as a seemingly personal tale of loneliness, but soon reveals itself to be telling the story of man committing mass murder from a Las Vegas hotel room.  It’s confronting stuff, and the outro to the track, featuring real life news reports, makes it even more unsettling.

Music To Be Murdered By is a lengthy listen, but not quite to the point of being self indulgent.  I would consider some tracks to border on “filler”, but the majority is very enjoyable – although definitely not for everybody.