What a scorcher of a night, in more ways than one! With no working aircon in the band room, just a couple of fans blowing a bit of warm air every now and then, it felt like 100+ degrees in there, but this show was well worth sweating for.

Between a long day at work, the 44deg heat and finding a spot to park the car that wasn’t a permit only area, (my gig partner in crime, Nikki 666 eventually nabbed one thanks to her good parking skills), we finally arrived and walked into an oven that was the band room just the see the last song being baked by openers of the night, Formiles. I’ve never heard of them before, therefore one track wasn’t enough to grab me and form an opinion of them, but they did grab Nikki’s attention right away and she said they reminded her of Branch Arterial which she was a huge fan of. 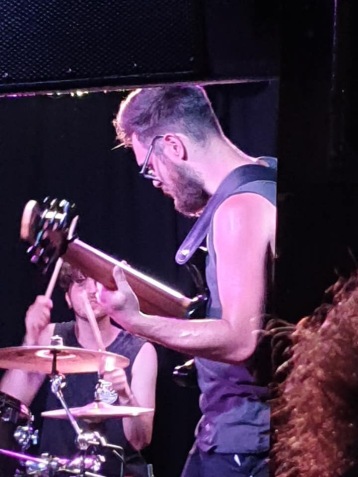 Their profile says they are a 3 piece experimental rock/metal band from Geelong, if that’s your thing, check them out.

It was good to see half the room already filled for the opening act which indicated to me that they must have a good following of fans given the 180degC conditions!

Up next Terrestrials, a 4 piece melodic/alternative rock outfit from Melbourne. Another band I’ve never heard of, I wasn’t sure at first what to make of them, but by about half way through their cooking time, the tracks started to smell good and had my attention and  kept it till the end of their set. I really liked them. Good strong vocals by singer Scott Alexander, good energy, some fine guitar riffs along with the rhythm section capturing different moods throughout their songs. They also had a certain aura about them on stage.

Young talented band that I’ll be sure to check out further. If you’re into bands like Dead Letter Circus and Deftones you should check them out too!

After a few moments outside trying to cool off a little, it was back into the oven to see Arcane Saints roast up a delicious set of ’90s influenced alt rock that consisted of mainly brand new tracks that I hadn’t heard before which sounded awesome, (I found myself singing a few words to some of the choruses already), with an oldie, Hysteria thrown in for good measure. 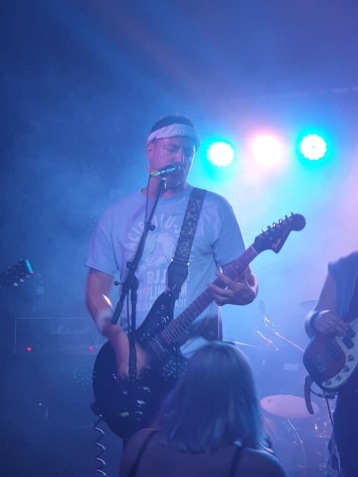 The new tracks are headed in more of a pop/rock direction with a less grunge feel of the older tracks but still have enough hardness and  rawness to their sound which I love.

Singer/guitarist, Mike’s sultry vocals and eccentric stage presence made for a bold, fun rockin’ set, especially when he decided to have a lie down on stage. No, he didn’t collapse from heat exhaustion but no-one would blame him if he did!

I was surprised not to hear any of the last 3 singles, Black Limousine, Something Real and The City in the set, but it was like when you leave out a few key ingredients in the dish you are baking and it still turns out good. 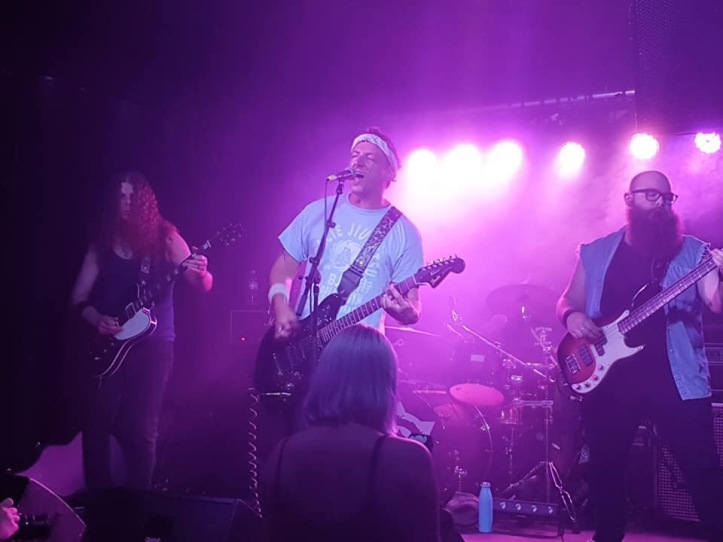 It’s been a while since I last saw Arcane Saints live and I felt  that it was one of their best performances and it was thoroughly entertaining.

By the time headliners, Cirrus Crown hit the stage, the room had turned into a sauna and was packed with pumped up sweaty punters. As for the 45 minute set they put on, WOW! What a sultry, steaming show!  I was mind blown. For a band that’s only been together for about 12 months and only a handful of gigs under their belt, they played like professionals with confidence and experience well beyond their years.

With frontman, Markus Saastamoinen’s passionate, soaring vocals and the huge hard, heavy progressive sound, I soon forgotten about the trickle of sweat running down my face and back as the band took me on a compelling and captivating journey with their set of highly dynamic, intense and atmospheric songs and their powerful,  energetic stage presence. (I had almost the same feeling I got every time I witnessed a show by one of my all time favourite bands, The Butterfly Effect).

Their 2nd track, Catalyst seemed to be a crowd favourite as some of the die-hard punters were singing the lyrics, and there was lots of head banging going on by punters at the front who didn’t seem to mind the heat one bit!

There was a moment when guitarist, Pete Borzeta steps down out into the crowd causing a little frenzy.

The band ends the show with the single, who’s launch it is, The Hardest Truth and it’s even bigger and more potent live, and once again had the crowd singing along to the words.

A special night for the band had come to a close and they seemed to have enjoyed it just as much as the crowd.

In closing, I just want to thank every single band that played tonight in what was very oppressive conditions. If it was sweltering for us punters, couldn’t begin to imagine what it was like for the bands playing on stage under those lights putting in 110% and I didn’t hear one complaint. Kudos to  you all.