Ablaze with Kvlts of Vice, Jax and the Wayward and Eat The Damn Orange, Northcote Social Club, 26/01/20

Ablaze ‘Where’s My Drink?’ Homecoming Tour with Kvlts of Vice, Jax and the Wayward and Eat The Damn Orange at Northcote Social Club, 26/01/2020.

Australia Day.. and what a way to celebrate than at a live gig with 4 awesome Aussie rock bands showcasing a small portion of what Australia has to offer in the world of music today, and what an amazing night of rock it was. This time I was focused on all acts (though I had already seen 3 out of the 4 a few times before), and did not venture outside till I left to go home!

Early punters were treated to a solid and groovy set of juicy goodness and the dynamic, sassy, cheeky, pocket rocket front woman that is Tash Vargas and her set of window cracking pipes! Wow that girl can sing and perform like there’s no tomorrow!

With eccentric song titles like Gluten Free Children, Gloryhole Nightmares and Munt Bolter, (which was written for my Princess Sister friend, Nikki 666 story withheld!), you know you’re in for an amusing ride, and along with their awesome rendition of AC/DC’s Walk All Over You made for a brilliant and entertaining start to the night.

Up next Jax and the Wayward from Hobart, Tasmania.

This band came recommended by the Ablaze boys early last year, I checked them out and liked what I heard, so I was keen to see them live for the first time and they didn’t disappoint.

It’s always going to be hard for a female singer to follow on from the powerhouse that is Tash Vargas, even though Jacqui (Jax) didn’t come across as strong as I expected, she did delight the crowd with her hints of Janis Joplin styled vocals and their raw, bluesy and funky set of tunes. There were some microphone issues mid set beyond her control, even though I felt sorry for Jax at the time, she did handle the situation like a pro.

Couldn’t help but notice their guitarist, Malcolm (Bat). Wow! What a shredder he is. Mind blowing riffs throughout the whole set. Along with the rhythm section kept the momentum flowing whilst the vocal audio was being fixed. I heard something along the lines of Bat having worked with Robert Plant, nonetheless his prowess as a musician is second to none.

Jax later did mention she had spinal surgery last year which has limited what she can do on stage, (that explains why she didn’t come across as strong as I thought she would), so kudos to her for putting on a stellar performance after what she’s been through. Here’s hoping one day she can return to being the full powerhouse front woman I can see her being.

Met Jax briefly and she’s as delightful off stage as she’s on.

Thoroughly enjoyed their set, including the closer, a surprising cover of I Don’t Need No Doctor by WASP! I highly recommend this band if you like your rock with a twist of funk/blues.

With the crowd building, it was time for  Kvlts of Vice from Sydney to hit the stage. I’ve seen these lads a few times now and as expected, they were tight,  engaging and highly energetic producing an explosive set of bluesy, gothic, hard rock tunes with a dirty, dark twisted side. With the addition of a keytar player to the line up has added a stronger melodic sound to their set.

If Tash Vargas’ pipes cracked windows earlier in the night, frontman Jordan Von Grae’s shattered them to pieces with his! Wow! Incredible voice and those high notes are insane! Jordan is a brilliant showman, has an amazing stage presence, interacts well with the crowd, strutting his stuff on stage and on the floor, it’s saucy, it’s racy, it gets crazy and the crowd lap it up!

Danny from Ablaze steps onto the stage mid set to present guitarist, Odin with a cake as part of his continued 25th birthday celebrations which I thought was a sweet gesture.

The band powered through their songs including the latest singles The Golden Line and Vendetta, and a couple of my older favourites, The Devil You Know and The Mortician Blues, along with a great cover of the Animals, House of the Rising Sun and the last track which I hadn’t heard before, Party Hard, and that they certainly did!

Go see them if you haven’t before, they will blow your mind!

Fresh from their first ever European Tour, the band of the moment, Ablaze, living up to their name came firing on stage with all guns blazing opening with Back for More and the line, “get in, sit down, shut up and hold on tight” sang with such conviction had the punters paying attention and realising they were in for one hell of a joyride right from the start.

The confidence they gained from playing overseas was evident as frontman, Danny Slaviero worked the stage and crowd like a boss whilst smashing out favourites Pick Your Poison, This Bitch Bites and Dirty Little Secret and the whole band played like they were on fire! 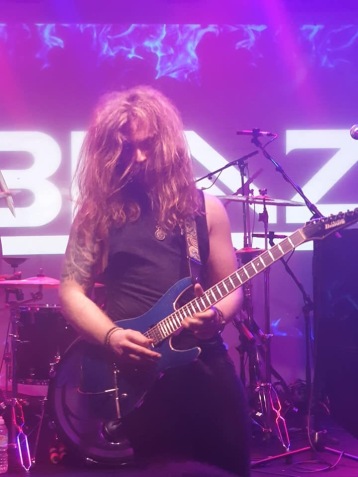 Dan ‘Mango’ Mangano is a powerful drummer belting those skins with the biggest grin on his face.

During the Irish jig single, Where’s My Drink?, Danny did the rounds with a bottle of rum, each member taking a swig, particularly Mango who grabbed the bottle and proceeded to skull what seemed to be half of it! Some of the punters in the front row enjoyed a gulp or 2 as well.

Didn’t seem to affect the rest of their performance though as the band ripped through more killer tunes, Hurricane In My Head (which I’m sure is what the lads felt the day after!), Kings & Queens, the first ever single The Hardest Way, Bad Tattoo and Long Way Home.

Then Mango showed off what a set of pipes he has and his guitar skills during the little acoustic number, Bottom of my Bottle which was followed on with Just A Taste with the crowd chanting the Whoa Whoa Whoa bit and ended with the chaotic Bar Fight Blues.

An encore was cheered for and the boys obliged returning on stage and calling up Jacqui from Jax and the Wayward to join them on No Turning Back.

Ablaze were dynamite throughout the whole night, great musicianship, they were engaging and there was lots of crowd participation, singing along to the catchy, infectious tunes, fist pumping, head banging, toe-tapping and foot stomping throughout the whole set. It was one big party, on stage and off, just how the boys like it! A show full of passion and soul, it was the best I’ve seen them in the five years I’ve known them.

It’s the best feeling watching a band grow and Ablaze have in abundance. A must see band for any rock lover.

In closing just want to add it was my first time at the Northcote Social Club and it has become my favourite live music venue. Awesome pub and band room, great sound and good vibes.

Australia has some amazing talented bands and I encourage any music lover to get out and support the local bands and venues to keep live music alive! It’s the best drug to get high on!

Fantastic night, I don’t normally give out scores but I was so highly impressed with the night’s line up and performances, each band bought something different to the table yet gelled well as a whole, it’s a 10/10 from me.