The history: Gogsy had just finished his time playing with punk Band THREATS from Edinburgh. He had started jamming guitar with his good friend Joe Gardner. Joe introduced Gogsy to MSG, Scorpions, Iron Maiden, Saxon and instantly there was a keen interest in getting a band started. Twin guitars like Iron Maiden and Thin Lizzy was a great fit for Joe and Gogsy and the jamming sessions were definitely centred on this style.

At the same time but separately, Mike Murray and John Allison had started jamming drums and bass together. Drummer and bass player looking for guitarists, and 2 guitarists needing drums and bass. A marriage made in  heaven? Mike had placed an advert in the local music press and the 2 teams got together for a few jam sessions and it all started to gel together. Next a vocalist.

Colin was the last to join the band and the first line up was done. Next a name. Loads of options were tabled. Each member had their favourites, nobody agreed with the others, so a vote was taken. Everyone had two choices. Everyone’s first choice was different but every second choice was Medusa Touch. That was it a band was born.

The band played together for about a year and a half from 1983 to end of 1984 when the first couple of changes came about. Joe found it difficult to commit his time to a band seeking success and dropped out. He was replaced by Colin Stewart who was a seasoned guitar player playing in local bands in Midlothian and around Edinburgh. The NWOBHM of the time was a lot heavier than Colin was previously used to, but he loved it. Around the same time John Allison left the band to be replaced by Lee. At the time John also played in a local band playing local clubs and weddings. They were an excellent band and had been on TV a couple of times trying to get  somewhere in their field. John needed more time to do that, so was replaced by Lee. Not long after Lee joined, it was obvious that Havy Metal was not really Lees “Thing” and he needed to be replaced.

1985 seen the entrance of Craig Robertson on Drums. A great drummer, our drummer who could use double pedals. He wsn’t only a beast of a drummer, he was quite technical when he wanted to be. He added a great variety to Medusa Touch especially as the Thrash bands had just started to make a real appearance.

It was in late 1985 that Mike left to pursue and moved to London in search of fame. Medusa Touch tried and tried to find a replacement bass player but had no success. What do we do? ALL CHANGE. Colin moved onto bass, Gogsy took on guitar and vocals and Craig on Drums.

1986 the new look Medusa Touch hit the road. Now heavily influenced by the emergence of the Thrash bands but not a thrash band themselves. This 3 piece is probably the Medusa Touch that most people remember. This band played in this for till 1989. Still playing the rock scene around Scotland but never getting any interest from record companies of the day. The hair metal scene was in full flow at the time. Great music, but certainly not the Medusa Touch look.

Finally, Craig left to join another band and Gogsy and Colin enrolled John (Snoddy) Snodgrass and Mikey Hunter on Guitar and Drums. This line lasted another 2 years. The band never officially broke up, but just stopped playing.

2018 saw interest from George Arvanitakis, a NWOBHM maniac from Salmóni, Ilia, Greece. George asked the band if they were interested in releasing the recorded material that existed from days gone by. The answer Yes, and here it is.

The current Medusa Touch is a band that Gogsy has played with for the last 5 years, originally playing many tracks from the glory heavy metal days in the 1980’s. It was easy for these guys to fan the flames of the old Medusa Touch fire and bring out the tracks from back in the 80’s. 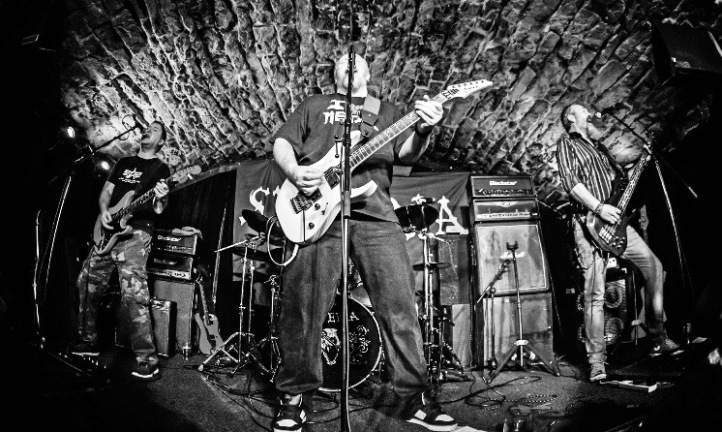 Here, Shayne speaks with the band, about their past, present and future as part of Noise Pollutions ongoing “Introducing…” series.

It’s our identity. Back in the 80’s the band logos were a lot like pictures. You didn’t necessarilly read it you recognised the picture. That’s How we chose our logo. The name came from a Film called The Medusa Touch.

We are all from in and around Edinburgh, Scotland.

The current line up for 7 years. We started off as an 80’s metal cover band, burt ONR records wanted to release the Medusa Touch CD so we became Medusa Touch.

The band was born out of a decaying Punk Band in 1982. Gordon (Gogsy) Sinclair was the guitarist in the UK82 punk band THREATS, and the band had reached its natural conclusion in early 82. Gogsy and a close friend starting jamming together to bands like early Maiden, MSG and Scorpions and then decided that a band would be a good idea. We joined up with a drummer and bass player we say advertising in a local rock mag and that was that MT was born!

Maiden, MSG, Scorpions, Motorhead, (I’m just going to list all the 80’s band here hehehehe) you get the picture. Its all the great bands from that era. We loved them all then and still do.  But specifically, I would say somewhere in the WASP, Y&T, Ratt, Maiden, Accept type music sound. Definitely, the 2 guitar vibe. Definitely 80s metal. Although the modern equipment available really adds to the sound.

It’s a 13 track release of all songs from back in the 80’s, a couple relyric’ed t make more relevant. Anybody who we have spoken to, describes the tracks as proper head-shaking, first-pumping, sing-along brazers. 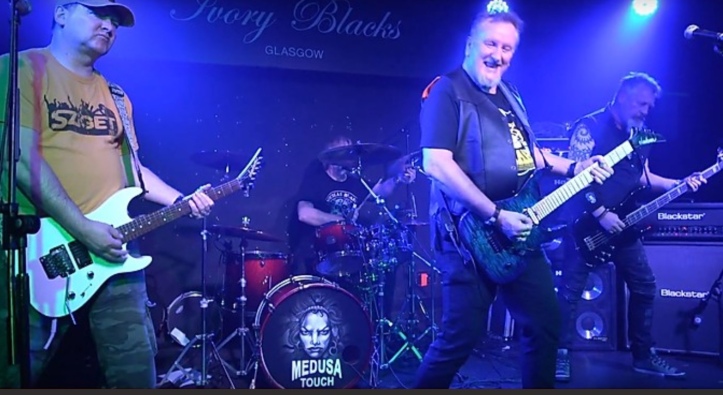 We are on most of the streaming sites, spotify, apple music, deezer, amazon, and also on iTunes. If you want to own a CD (ols skool) we are selling them on our website.

Pretty easy, get out there and gig as much as we can and are able.

For me (Gogsy) it would definitely be one of 3. 1 – Iron Maiden, 2- Accept, 3 – Anthrax. My choice would change day to day depending on my mood. But definetely one of them 3.

Good Fun, Polished, entertaining and great for a sing along, you will definitely go home happy.

Quite a few festivals in 2020.  Keep up to date on our website and socials.

At the moment we are the ones  who aren’t the main stalwarts of the scene, that are doing the 80’s metal scene. Songs from that period as we played them back then. Not any modern influence at all. I do love the modern mmetal sounds , but that just not who we are.

Good time, songs that will have you singing along with a proper earworm all day hehehe. Really catchy tunes and lots of hooks. You will enjoy it, Trust Me 😉

That’s a good question. Because, we didn’t get anywhere back in the 80’s, all our shows now are a bonus and each one is a great memory to carry with you. So, our biggest acheivement must be coming back and getting this second chance.

More of the same please. Another release can be done as there is enough material from back in the day to release as a new album. More gigs. WE have a few festivals we are playing in 2020 so thats great news as well.