After a 14 month hiatus from gigs, I’ve started to venture out again and attended my 2nd gig of the year with my Princess Sister from another Mister, Nikki 666, and an awesome, rockin’ night was had down at the foot of the picturesque Dandenong Ranges.

Opening up the night, Torrential Thrill, “waking the neighbours” and the audience with a thrilling set of 6 hard hitting tracks that had the punters bopping their heads and tapping their feet from the get-go.

From the opener, the turbo charged and first ever single, King of the Road, (which always reminds me of summer when I was younger for some reason), then straight into the powerhouse that is Hail Mary, the boisterous Waking the Neighbours, through to the 2nd album title track, Nothing As It Seems, followed by the brand new monster of a single, Animal (Like Me) and closing with the fast-paced Human Zoo, they delivered a tight and intense set packed with awesome riffs and an energetic stage presence. It’s evident how strong the bond is between members, when they and in particularly frontman, Malks go into ‘beasty’ character mode, makes for a musically and visually entertaining show.

There were some slight sound issues beyond their control, which were handled in a professional manner and didn’t deter away from the overall performance. 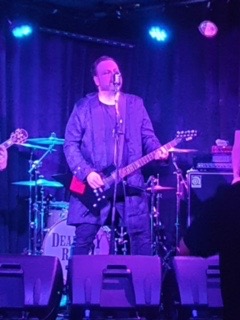 Having seen them about 3 or 4 times now, they keep getting better, harder and heavier, and never fail to disappoint. Always leaving me wanting more. If you’re into hard rock with old school metal influences and haven’t seen these guys live, you’re missing out!

Next up Motherslug. Unfortunately I didn’t get to see this band as my Princess Sis was having a ‘moment’ and needed some fresh air, as did I as it was quite stuffy inside. First time I’ve heard of them. From outside I could make out that they were some sort of a doom/stoner type heavy rock band. Apologies to the band for not checking them out. I shall follow them up on their social media pages, as should you if stoner type rock is your thing.

By the time head liners, Dead City Ruins hit the stage, this old chook’s brain was tiring after a long day’s work. Even though I really enjoyed their set, I wasn’t totally focused enough to write about it as I didn’t plan on reviewing this gig, so I let the devilish Nikki 666, (it was her first time seeing DCR), hijack my column and totally agree with what she had to say as I have seen them before.

However, I will add that these seasoned hard rockers did put on a dynamic and energetic live show and it was my first time seeing them with their new frontman, Steve Welsh and he fitted right on in with his powerful vocals.

Dead City Ruins were right at home on stage. They were tight, confident and engaging,  playing about an hours worth,(or close to) of old favourites and soon to be your next favourite. New songs sound awesome and has me excited for their new release later this year.

A band that is quite captivating,  riffy, melodic at times, heavy at times you couldn’t ignore the sound and they undeniably had the crowd eating out of their hands.

Loads of fist pumping and crowd interaction, particularly during Broken Bones, what seemed to be a crowd favourite.

As the final track came to a close, the crowd chanted for an encore and the band delivered.

They blew me away. Cannot wait to see this band again, highly recommend if you like rock, you’ll love DCR!