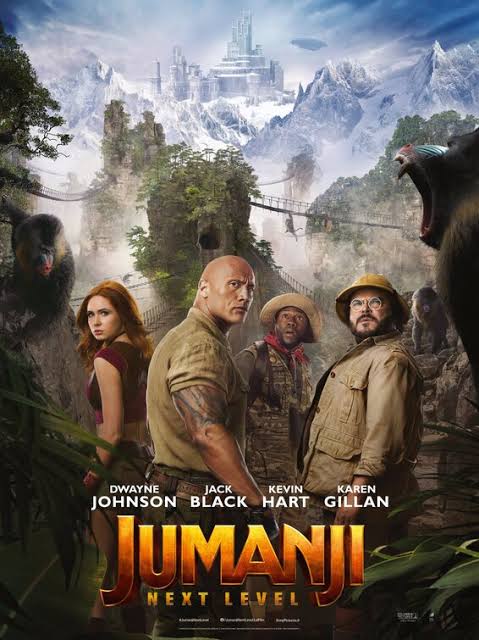 I took the kiddo to check out Jumanji Next Level on the big screen for a bit of school holiday boredom killing. It’s set after the first of the new series of Jumanji where they are trapped in a video game (Not the original with Robin Williams the legend).
The 4 players Spencer, Martha, Fridge and Bethany are back with a twist. Spencer goes back into the game and the others have to rescue him with extra cast and a load more mishaps and twists it makes for a great ride for the entire family.  Both myself and kiddo found ourselves laughing often and with actors like Kevin Hart, Danny Devito and Jack Black it’s really hard not to.. Though I have really grown a liking for Dwayne ‘the rock’ Johnson as an actor, he does action and action/comedy really well, better than his wrestling (Yes I will cause that stir). Danny Glover was an exciting edition too.
The film itself was exceptionally well done and well written, there was no point in time when you get bored or anything of the sort and it takes a good movie to hold a asd/adhd childs attention its entirety.
So if you’re looking for some good harmless entertainment then this film is a great place to start. Oh, if you are planning on taking the young ones bare in mind there is a couple of inappropriate things and some mild swearing hence it’s PG but still harmless none the less (most kids hear and see worse these days anyway).
9/10
Steph Suter-James.