With that in mind, our man Greg Noble (not so) reluctantly takes a few for the team, and offers up some suggestions of a couple of choice beverages to get your holidays underway.

It’s aroma was hop and fruit driven and the taste had passion fruit and melon hints. It was tasty and clean on the palate, with a pleasant and well balanced finish.

This beer has 5.0% alcohol volume and delivers 1.5 standard drinks.
It is crisp and light and has a faintly bitter taste.
The aroma is one of nuts and biscuits.
It was a refreshing tipple. 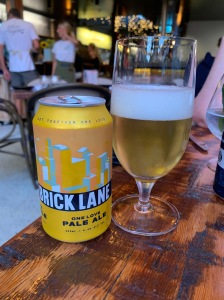 This beer has 4.4% alcohol volume Nd delivers 1.2 standard drinks.
It is quite soft bodied and has a hop and citrus aroma.
The colour is quite remarkable – almost iridescent in its golden colour, from the flaked wheat used in its production.
It went down really well.

Like all of their offerings, this beer was brewed  on the Gold Coast by 3 mates. It  presented ominously in its matte black can.

It’s a white IPA and is a spring offering by these boutique brewers, who seem to release limited edition beers more often than Donald Trump gets a spray tan.

It had an intense golden colour that surprised me.

The aromas were that of hops and citrus type things – pawpaw, grapefruit and orange.

The initial taste was super intense, but  the spice from its witbeir heritage was balanced by the citrus flavours. Given that though, it is quite light bodied – I didn’t feel like Greg Ritchie after one – and it had a  smooth, dry finish. 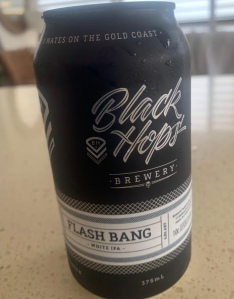 It packed a wallop at 6.5% Alcohol Volume, delivering 2 standard drinks, so “Flash Bang” is not just a clever name.