Star Trek is so much better than Star Wars.

There’s no spoilers in what follows. If you did that to me, I’d hunt you down and fly the Millennium Falcon up your arse.

My first Star Wars experience was “Episode IV – A New Hope” when I was 12. I have seen every one in the cinema, a rare thing for me. This franchise has been with me for a long time.

I got a bit choked up when that music and that text opened proceedings. I also thought, “PLEASE don’t suck…”

The first part of the film spends time advancing the narrative. There’s still action aplenty, but some of the loose ends form the previous few movies were tied up and it set the scene for what was to come. A good deal of time was also spent on character development and you gained a greater understanding of the pressures on the characters and the political machinations of the current galaxy.

Rey (Daisy Ridley) and Kylo Ren (Adam Driver) continue their tense connection and this expands into new territories. As you would expect, there are some epic light sabre battles between them, including one that channeled Obe-Wan and Anakin’s in the magma. Their link unfolds throughout the film and this story runs deeper than I was expecting. Towards the end of the film there are several seminal moments between them. Kudos to both for their acting throughout.

Finn (John Boyega) and Poe (Oscar Isaacs) continue their shenanigans and some of their back stories are expanded upon, giving these characters richness and added weight. A few times the interplay between their characters was comical and also challenging.

There were a number of moments that drew gasps from the crowd – me included. There were also many times the movie visited places and plot points from previous movies and this gave a sense of familiarity and fidelity. This film also advanced the galaxy into new realms, but some folks might think that this didn’t get enough screen time.

About 2/3 of the way through the movie I was getting a bit disengaged and wanting things to move along. Within minutes things again leapt forward and I buckled myself in for the run to the finish. I wasn’t disappointed with what was to come, spending a good deal of time literally on the edge of my seat.

As the movie closed and a number of elements were drawn together, I was satisfied with the way that this was done. There were some things that I wasn’t expecting, some things that were real surprises and some wonderful nods to the films that had gone before.

As we walked out, my beautiful (and long suffering) wife and our eldest (and not having suffered as long) daughter and I swapped things like, “Did you see when…?” and “Why did they…?” We weren’t alone, as the folks around us engaged in similar repartee. This signalled to me that there was impact amongst the punters.

Let’s take stock to see if this was indeed a Star Wars movie:

The return of some lost friends? Check!

The Sith up to no good? Check!

Not caring about the plot holes? Check!

For a little over 2 hours I was 12 years old again. That was a great feeling.

The critics will pull this movie apart. I’m not a critic, I’m a reviewer. It’s a rollicking ride and a worthy part of this saga. 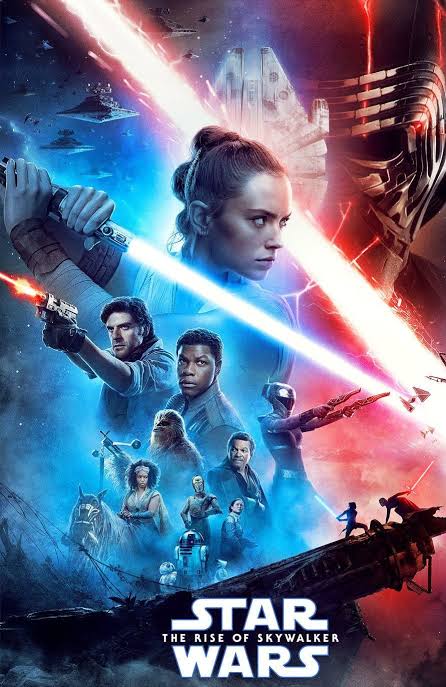 I have not read a great deal of positivity regarding this film, in the days since I went to check it out, and in my opinion, that’s sad – people seem to be constructing opinions without having actually seen it for themselves…

I grew up on Star Wars. I had a video cassette (google it) of Empire and Jedi recorded from TV.  It was the kind of recording that still had the ads left in, but I wore that tape out – literally!  Unfortunately I didn’t get to see the original trilogy in cinemas on the first go round, but I did see them on re-release, and have seen every Star Wars film in cinemas since.  I love them all in different ways – hell, I even love the two Ewok adventure movies..

To me, The Rise of Skywalker was a brilliant closing out of a nine film saga.  It had everything I wanted plus more.  There were times when I was on the edge of my seat, and times when everything was a little more subdued, but everything was in place to serve the saga.

I keep reading that there was too much “fan service” in this one, but I don’t agree.  At least, I don’t agree that it was merely “fan service” – once again, those moments of familiarity were there to serve the overall story, and did so perfectly.

The only thing I wasn’t impressed with, was the inclusion of yet ANOTHER new droid.  That was unnecessary – but whatever, it’s a new toy for them to market..

There were visually awesome battles, thrills aplenty, laughs and moments of emotional overload.  No spoilers, but at one stage I was overcome with rage at another of my favourite characters being killed off, only to find out that I’d been had.  A few familiar faces pop in, which helps us older fans engage with the new generation of Star Wars as well.

To me, The Rise of Skywalker successfully closed out all of the loose ends, and provided answers.  It does feel like a logical conclusion, but simultaneously, provides a new beginning if Disney decides to go that way.  There are other moments within the film that open new avenues of story that deserve exploration in future films, and I look forward to any new entry that is set “a long time ago in a galaxy far far away”.