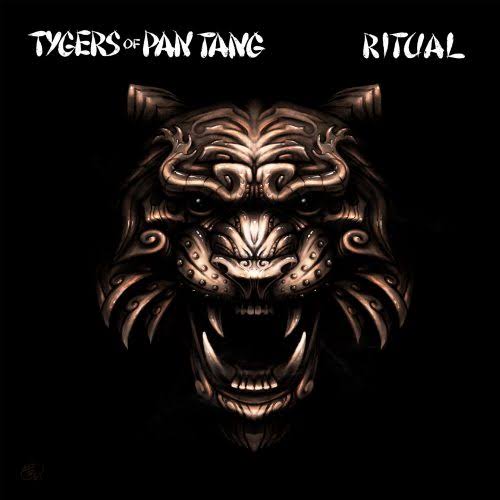 Formed in England in 1978, Tygers of Pan Tang have released 12 albums, with this being the 13th. “Ritual” weighed in at 13 tracks, for a duration of 54 minutes.

As always, I had a look down the track listing and the titles were genre appropriate. I was anticipating driving riffs, sweet solos and songs about heartache, struggle, loss and empowerment. Maybe a goblin or two.

“Worlds Apart” got the party started with technical guitar work and driving riffs. I was caught off guard by how melodic the music was, as I was expecting it to be much more dense. The track soon kicked up another gear. The vocals were of a higher pitch and were easily accessible. It was anthemic form the very beginning and vocal harmonies were used sparingly, but very effectively. At this point I’ll say that the guitar solos wail wonderfully, conveying emotion and purpose – there’s no pretension or examples of them being used a filler. This saves me from saying it in every description below. In any case, on “Worlds Apart”, the guitars were a masterclass of metal and I LOVED the robust, reverberating ring out at the end! I was humming this tune all afternoon.

“Destiny” opened with a car starting and the radio being turned on, which morphed into this track. The change in sound was welcome, showing that this band is no One Trick Pony. The track was about meeting your destiny, albeit with a tinge of sadness and regret. The riffs chugged along powerfully, but not in an overpowering manner. This one had me nodding and singing along to the chorus. Sorry, neighbours…

“Rescue Me” saved us a surprise, with a different guitar effects used. This riff was amazing – it REALLY grabbed me, as it chugged away like a freight train. The vocal harmonies were excellent and the track was about sacrifice and obsession, with some surprise at how things happened, with pain and revelation thrown in for good measure. The power didn’t let up, but a key change expanded its substance and impact.

“Raise Some Hell” spawned a faster pace that caught me by surprise, as I had been lulled by the previous few tracks. This track was riffalicious (Trademark: Greg Noble, 2019). There was an urgent intensity that matched the title. The guitar solo matched the speed of the track and this was impressive indeed. This was soon followed by a bass solo and a swanky guitar piece. Each moment of this track was a new delight.

“Spoils of War” battled onwards, starting ominously with a hum, a bell and a church choir. It reminded me of a battlefield at dawn. Military style drums were then used, before a slow and powerful riff appeared from the mist. Some clever lyrics were used throughout, like, “The thunder of hooves as the dead lead the way.” Pauses in the music were used to great effect and some staccato drumming gave the suggestion of gunshots. The vocals in this track were also significant – in many moments they were captivating.

“White Lines” was no middle of the road offering, with guitar hammer-ons used to give a different texture. It’s a track about reflecting on the past, using automotive and travelling themes as metaphors. This track didn’t grab me as much as it’s predecessors.

“Words Cut Like Knives” left me with a perm by the end. It was hair metal at its finest. The guitars were suitably stripped back and it had me reflecting on things that I’ve recently said and heard. The lyrics were again inspired, including, “We can’t be together, though we’ve tried so hard. A twist of fate has got us together, but reality bites…” The track muscled up in the middle, heralded by a guitar that wept and wailed. Another great line was, “Here I am a lonely man, I still believe you’re worth it.” Nnnnnnaaaaawwww….

“Damn You!” launched me back into power metal country, with driving riffs and some monstrous percussion. The lyrics were also appropriate, as we are “running for our lives – we need to leave right now and never look back.” Right! Let’s get to it, then! This track did indeed sound like someone running away, as the speed of the track cycled back and forth. It was a journey in itself.

“Love Will Find a Way” With a title like that, I steeled myself for another ballad. But, the opening riff drove along, albeit with an emotional element. It started off as a power bald, but soon settled into a reflective air, where we are leaving at the first light of day, surrounded by our regrets. This track was superb and it had me nodding. There were quite a few segments to this track, but this gave it substance and credibility.

“Art of Noise” opened with a bass riff that remained close to the surface throughout.  Some odd percussion elements were used and like it’s title suggests, there are many overlapping elements. I didn’t dig it.

“Sail On” predictably started with the sounds of the ocean, rope stretching, waves and seagulls. I want fish and chips. An ominous voice then greeted me and the sound fell away, with less distortion used. I was told that fate will never betray us and was asked how many times must we cry as we sail on for ever… The track wasn’t what I was expecting, which was a good thing. The track fell away in the middle before ramping up again. It fades slowly, leaving us with silence at the end of the album.

This album feels like the 1980s, but with a subtle evolution to keep it relevant. From the opening bar there were rambunctious riffs and superb solos.

It was unashamedly power metal, effective and engaging because it was done with fidelity and without pretence. When done badly, music of this sort is a bad joke. But this album was The Joker – intense, driven and full of surprises. The guitars surfaced in surprising ways, meaning that all across the album there was always something going on. It’s robust, well engineered and perfectly performed.

However, some of the tracks don’t live up to the ones around them and I think that the album might be a few tracks too long. Sometimes, less is more. However, this is rollicking good time and well worth being played. A lot.