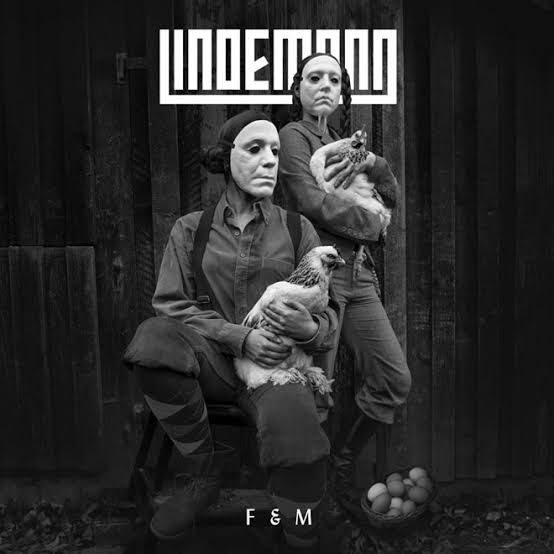 Their debut album of this dynamic duo was “Skills In Pills”, released in 2015. It created a ruckus because the pairing seemed to be one made in Heaven (or Hell) and it lived up to those expectations, with heavenly metal sounds paired with demonic vocals and themes appropriate to the underworld. Some of the lyrics were controversial, not only because of their confronting commentary, but also because they were, um, silly. At the time, Peter was asked about the lyrics and their odd nature. He spoke about them being immature because he and Till were both immature. He also spoke about them being in English, as Till likened song writing to picking fruit from a tree – that he had harvested all he could from German lyrics.

“F & M” album has Till singing in German. It seems that he has found more dark fruit to harvest… 6 of these tracks are from a musical that this pair wrote along the lines of “Hansel and Gretel”.

“Seth Auf (Stand Up”) stands up with driving percussion and compelling synths. It feels like “Skills in Pills” immediately. However, it also seems like Rammstein and Pain had a mutant offspring. The sound of Lindemann has undergone an evolution. The bass is subtle, but noticeable, and the guitars have an intricate richness. I was singing along immediately, as the language barrier never seems to be a problem with Till’s music. It sounds catchy, but it’s dark and sinister. It tells the tale of a child who is pleading with his drug addicted mother to stand up, so he can go outside to play. This is another hallmark of this album – disguised under the language and the music are dark themes. These sometimes come through, at others skulk and caper in the background.

Know that “Ich Weiß Es Nicht (I Don’t Know)” has a busy techno opening. It’s strong in intent and the higher pitched keyboard layers are a sound synonymous with this band. Till is slightly crazed and manic with his vocals. The chorus is robust and opera themed, before a tempo change in the interlude that has a dischordant nature looming in the background. The guitar work is stellar. The track finishes with a slow wind-down that put me on edge.

“Allefresser (Omnivore)” opens this feast with an interesting keyboard riff and a trance-like beat. The beginning is quiet and quite lovely, before it leaps back into a more signature Lindemann style and back again. Till is more restrained, which is always a bad sign… The interlude is intense, led by the keyboard arrangement. Till wades in with a growling section towards the end, before things calm down and fall away.

“Blut (Blood)” haemorrhages a heartbeat keyboard opening, accompanied by simple guitar strumming. Restrained vocals give a ballad-like feel and it is reflective in nature. The sound becomes heavier, with a pulsating bass line that reaches your heart. Gothic choruses are augmented by a haunting quality that resonates. The sound is quite remarkable and it doesn’t let up. Towards the end, Till whispers in the background before the instruments fall away and we’re left with Till in our heads…

“Knebel (Gag)” opens with acoustic guitar and it sounds like a beer drinking song. I get the feeling that this is telling a tale that we might not want to hear. Till calmly discusses his likes: palm trees, the sea and you, with a gag in your mouth. Yep. This track is elegantly simple – vocals and two layers of guitar. Just when I was revelling in the sweetness, it leaps forward into a Till breakdown, catching me by surprise. Again, the guitar work is amazing, with a robust density of sound.

“Frau & Mann (Man and Woman)” is a great title, because this feels like Rammstein and Pain simultaneously. It is a different sound again, with a clever, shifting riff which cycles throughout the track. I was humming to this one immediately. Tills’s use of a repeated “Ai, ai, ai” creates a bond with the track. Boring to state again, I know, but the guitars are superb.

“Ach So Gern (Oh So Much)” waltzes forth with a tango groove. Yep, you read that right. Tasty guitar elements are used and a variety of instruments add to the espieglerie (French: roguish tomfoolery, because “shenanigans” is used everywhere). I thought that I could hear different guitars and even a piano accordion. It’s robust and clever, with so much to hear. I could see Till in a tuxedo at an old school microphone, with Peter as the villain from “Despicable Me”, skulking around the instruments. Till flexes his vocal chords later, adding to the density and intrigue of the track.

“Schlaf Ein (Go to Sleep)”. Remember Noni Hazlehurst’s reading of that book “Go the Fuck to Sleep!”? That’s where my mind went. This track has its roots in an 18th Century lullaby and it wakes from its slumber with dramatic piano and slow vocals that have intense depth. It has many sneaky elements, like piano flourishes and triangles. It “operas up” (Trademark: Greg Noble) with strong piano and weeping strings and Till’s pronunciation and intonation is compelling, with his performance in this track being outstanding. His vocals are unmistakeable. The track is achingly beautiful, which meant I was waiting for the breakdown. It didn’t come. Foiled again!

“Gummi (Rubber)”, unsurprisingly, is about rubber fetish. It has an odd synth opening, which in line with the subject matter, is appropriate. It soon becomes disturbing and intense, also appropriate. It’s is pulsating in nature and it feels like a tale of obsession. Appropriate. The wall of sound continues throughout the track, with few moments for us to come up for air. The interlude has the bass more pronounced and a change in tempo, before the fetish returns. At the end, the vocals break down and then wind down. It grabbed me.

“Platz Eins (First Place)” crosses the line with a techno opening that would not be out of place at a rave. Yep. The vocals are of a different timbre again. The blueprint of the track is steady, drawing you in and when it occasionally shifts subtly, it draws you in further. No, that’s not a euphemism. The grand, anthemic choruses are impressive. The vocals change at the end, leaving you somewhat disturbed. I wouldn’t have it any other way.

“Wer Weiß Das Schon (Who Knows)” has a poignant piano arrangement and the vocals are amazingly longing and reflective. The use of strings gives an elegant ballad-like feel. No joke, I got emotional, choking up… It felt like longing and heartache, particularly when Till whispers through the piano arrangement. Till’s surprisingly marvellous vocal range is displayed for all to see. I imagined Till by the fireplace with a cognac. I was waiting for the breakdown, but was foiled again

“Mathematik (original version) (Mathematics)” has a formula based upon a machine-like sound that is like a crazed, but still logical, computer. It’s a track that fuses heavy rap, Middle Eastern pop, drugs and algebra. Yummy. But, it’s also disquieting. The receptive synths build tension and the vocals have a manic and soft focus. Soothing female vocals are also used in a binary blend. It’s clever and different.

“Ach So Gern (Oh So Much) (Pain version)” flips this track on its head, making it oh so much more. It becomes a pop track with a rock spin, with the tango still dancing in the background. I usually don’t like remixes or rearrangements, but this is done exceptionally well. It toughens up in the middle, becoming more Lindemann-like, but this then falls away into a dance flavour, before become urgent again, sounding like Pain. Till’s vocal impress again.

The sound on this album is instantly recognisable as Lindemann, but it has gone through an evolution – more confident and more varied. It is pure musical genius, not shy, willing to tackle a variety of styles. It’s impossible to typecast as a genre, because there are so many styles used, often fused with each other. No, that’s not a euphemism. Throw into the mix the use of restraint and surprise and the style becomes even more complex.

It’s like giving two big kids the keys to a muscle car and telling them to go wherever and however they like. Sometimes fast, sometimes slow, sometime sideways, sometimes flat out, occasionally upside down, but never predictable. It’s epic in scale and intricate in design.

All through I was wondering what was coming next and was seldom prepared when it materialised. Despite the mix of styles, it never lost its way. Just like I expected, it’s chock full of deeply disturbing tales, heartfelt emotions and off colour humour.

This is an album of many facets and dual personalities. It’s an eclectic collection of sounds and genres that never sits idle and never rests on the comfortable. However, it does build upon the familiar exceedingly well.

When listening to the track and writing this review, I was surprised at how often I was thinking in euphemisms and double entendres. That’s the power of any exceptional music, to elicit and emotional response. This is a grand, disturbing, dark, varied and compelling journey.