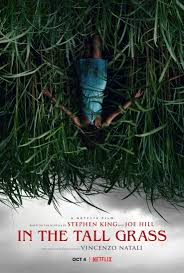 Here’s something we’ve never done here before – taken a movie, and the written work that inspired it, and compared the two.  In this case, the collaborative short story, In the Tall Grass, written by Stephen King and his son, Joe Hill, and the Netflix adaptation, directed by Vincenzo Natali of the incredible horror/thriller, Cube, fame.

Originally published as a two parter, in the July and August 2012 issues of Esquire magazine, and later released in e-book and audio book formats, this short story, or novella, is an unsettling, but easy read.

When a brother and sister hear voices calling out for help, they enter the tall grass to investigate.  What they encounter, is a field of grass with sinister powers lurking within.  It’s only 70 pages long, so it’s an easy read – one that I knocked over in a single sitting.  As I stated, there are some unsettling passages within, but nothing that a long time King fan wouldn’t be used to.

The secret to this stories success, is in its ending, or lack there of, leaving us to wonder how long the situation found within, has been going on for – It’s completely open ended.

Often, a written story doesn’t translate well to the screen, but in this case, the relatively simplistic story should be able to be adapted, and feature all the detail that the authors intended, so let’s take a look now, at how this adaptation stands up…

Rather than sticking to the simple formula of the novella, this Netflix adaptation, takes the source material and completely makes its own version.  Characters are added, as well as some silly time loop deal – all of which makes this pretty convoluted and hard to enjoy.

Of course that’s only my opinion, as somebody who read the story.  If you go in to this movie blind, you might love it.

It is overflowing with creepy visuals and sinister undertones which keep it interesting, plus the small and relatively unknown cast do a fine job of utilising the material they have to work with.  Patrick Wilson is the only star of note (The Conjurring franchise) but his role here is minor – but arguably crucial.

Honestly, not a great book to movie conversion.