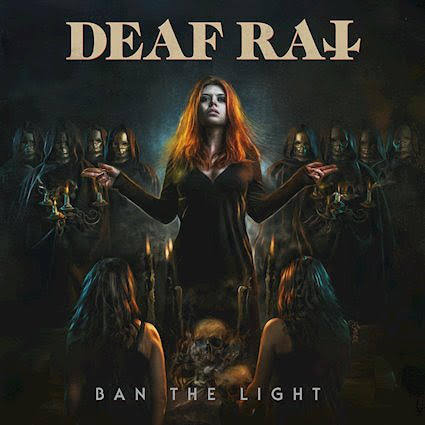 Muscular riffs and strong infectious melodies are the hallmarks of the sound of Sweden’s hard rockers, Deaf Rat.

Their debut album, Ban the Light, is the culmination of seven years of hard work for vocalist Frankie Rich and guitarists, Pat Kramer and Max Lander.  In the bands own words, their particular style of hard rock “fills the cracks in the ageing concrete between Zeppelin and Sabbath, Guns N Roses and Pantera”.

In all honesty, there isn’t anything too groundbreaking here, but in saying that, the album is 45 minutes of good solid hard rock music – well written, and well executed.

As the album opens with Fallen Angels, we are instantly hit with Mammoth guitar riffs and rhythms that pummel.  Hail the End of Days scales back the wall of sound, and settles in to a groove.  The vocals from Frankie Rich, are better suited to this more sleaze rock style, than they were to the first track.

Tying You Down is great.  The guitars are on fire and laden with interesting effects, the rhythms are pounding, and the vocals are once again, well suited.  Rich has a unique vocal style, that simply is not going to work all the time, but when it does, it’s great.

Save Me from Myself definitely has a Guns N Roses vibe at times – that’s all in the sleazy groove of the guitar riffs.  This also provides the best vocal performance, and the whole package comes together to provide an undeniable highlight of Ban the Light.

The title track has a bit of a soft open, before bringing in a brief, doomy nod to Sabbath, then ultimately becoming its own beast.  Stuttering guitar riffs, and an immense chorus that will bring about fist pumping and crowd interaction in the live setting.

Bad Blood is a ballad, but not of the love variety.  Acoustic guitars and gentle string arrangements accompany a set of lyrics about letting the shadows rise inside you, and drinking from the devils fountain.  It’s a little sinister and dark, but interesting, and pretty cool.

The big riffs come back in spades for Make You Suffer, while Say You Love Me is a catchy slab of hard rock, with just a little hint of punk rock sensibility.  There is a very DIY feel to this bands music that should be commended.  You can tell that they have worked hard to bring their vision for this album to fruition.

Wanted Forever is a swirling and catchy piece of rock n roll goodness – one that is modern, but definitely tips it cap to the originators and influencers that inform Deaf Rats sound.

Closing track, Welcome to Hell, is a near six minute long number, that covers a lot of different bases throughout.  There is simplistic piano, and effects used to add accent, but as the track progresses, it does become something epic.  It’s a good closer.

All in all, Ban the Light is a very good debut, from a promising young band.  I look forward to hearing more from them in the future.