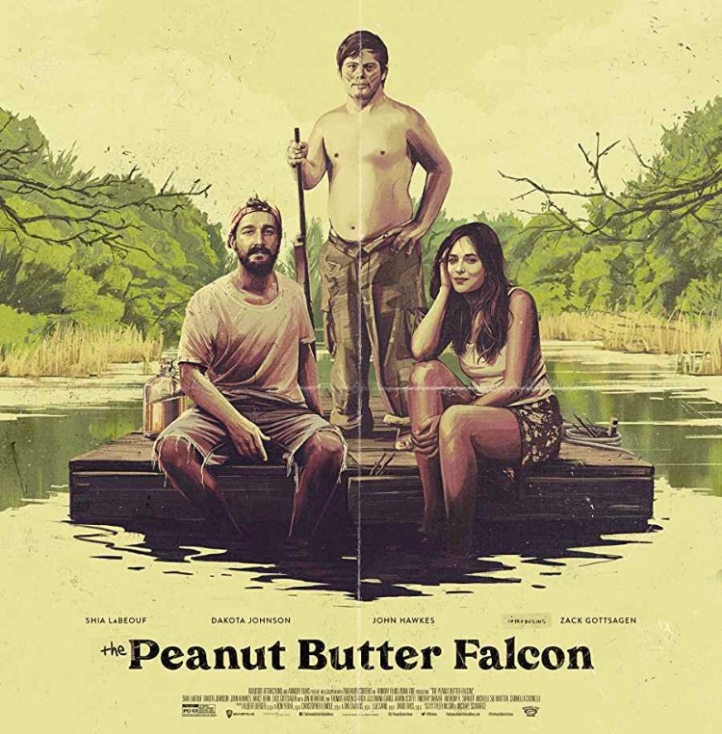 The Peanut Butter Falcon is an adventure story set in the world of a modern Mark Twain that begins when Zak (22), a young man with Down syndrome, runs away from the nursing home where he lives to chase his dream of becoming a professional wrestler, by attending the wrestling school ran by The Salt Water Redneck. Through circumstances beyond their control, Tyler (32), a small-time outlaw on the run, becomes Zak’s unlikely coach and ally. Together they wind through deltas, elude capture, drink whisky, find God, catch fish, and convince Eleanor (28), a kind nursing home employee with a story of her own, to join them on their journey.

I did not plan on reviewing this movie.  Occasionally, I watch something just to watch it.  I was flicking through titles yesterday, searching for something to watch, when I stumbled across this.  The cast got my attention mostly, not for Shia Lebouff or Dakota Johnson though, but for Jake Roberts and Mick Foley.  You see, I’m an old school wrestling mark, having grown up in the 80’s, wrestling was massive in my childhood, and I continued watching late into my teens.  My wrestling fandom dissipated over time, but recently I have been drawn back in by the new company AEW.. anyway, I digress.

The inclusion of the two wrestlers was enough to grab my attention, and I hit play.

What unfolded before my eyes, was a touching film about people, relationships and family. Not the wrestling centric adventure that I expected.   Sure, wrestling is there, but the real story is that of never judging a book by its cover.

It’s a heartwarming film, full of laughs and touching moments, and more importantly, helps to shed a little bit of awareness towards Downs’s Syndrome. Shia Lebouff is great in the role of Tyler, and Johnson is fine as Eleanor, but the real star of the piece is Zack Gottsagen as Zak, or the titular Peanut Butter Falcon.

Tyler Nilson does a great job of directing here.  The cinematography really captures the Delta region, and his script is wonderful.

I went in expecting a comedy centred around wrestling, and walked away with so much more.  Everybody should watch this film.