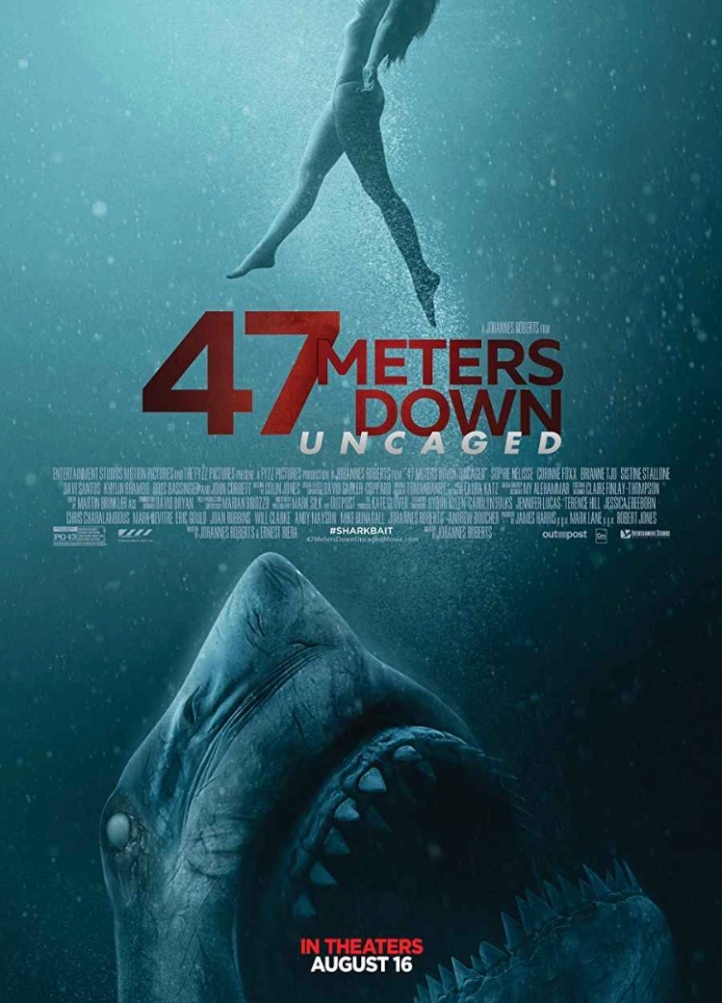 Another month, another shark movie.  Seriously though, keep them coming – ever since my first viewing of Jaws, shark movies have been an obsession of mine.  Even crappy ones like Deep Blue Sea and the Jaws sequels work for me.  It’s not just movies either, I’m obsessed with the beautiful animals in real life.  I’ve spent countless hours reading books and watching documentaries just consuming information about these beasts, and one day (hopefully soon) I’ll go and do a cage dive and witness their majestic nature up close and personal…

Anyway, as I said, here we go with another shark movie.  A sequel in name only to 2017’s 47 Metres Down.  I say in name only, because the two films share no characters – they are merely connected by the similar situations our lead characters are put in.

The acting is pretty average.  Most of these actors are relatively unknown, but a surprise was Sylvester Stallone’s daughter, Sistine as Nicole.  Also featured is John Corbett in a pretty minor role as the father.

The underwater scenes (literally most of the movie) look pretty great.  The director, Johannes Roberts (of the first film) manages to capture the claustrophobic nature of the caves quite well, and does a great job of coaxing terror out of his actors.

It is a pretty standard shark movie, so I think I let my guard down to a degree. I guess I was thinking I knew what to expect.  I don’t scare easily, and jump scares in particular, barely ever get me.  There was one in this movie that got me though – it got me really good – and it’s been so long since it happened, that I forgot how exhilarating it is.  Good job!

While the majority of the film is based around a situation that could believably happen, the films climax, or more of an ending after an ending, goes a little too far, and could have been left out in my opinion.