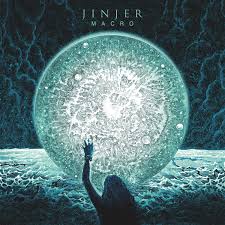 As a Batman fan, I loved the fight of good versus evil (even though it was sometimes unclear which was which), the struggle between light and dark and of course, the Batmobile. The villains were cool too. Remember Two Face? Half polite, half evil, all crazy. Half light, half dark, always disquieting. The character always unsettled me – I never knew what was coming next – but I couldn’t turn away…

Tatiana Shmailyuk is the vocalist of Jinjer and she fronts a band of highly accomplished musicians. They call the Ukraine home and have the reputation of being more like composers than song writers, as their work is characterised by intricately woven sounds and dense music.

“Macro” contains 9 tracks that weigh in at 41 minutes.

“On the Top” kicks off proceedings with a technically clever, full sounding brand of metal. It isn’t as dense as I was expecting, but it slowly evolves into a robust sound. Shmailyuk’ s voice is incredible! The track soon kicks up a few gears and I enjoy that the bass is obvious. The track has a melodic interlude – a feature used throughout the album – and the interplay of light and dark is done masterfully. The track is about the personal and interpersonal fallout from putting ambition above all else. The guitar work has real substance and there are many shifts in tempo and style, giving a carefully crafted feel to the music. I was somewhat in awe of this track.

“Pit of Consciousness” raises our awareness through a staccato opening that is an intense example of progressive metal. It’s a track about challenging mental health. The vocals go up another notch again, only to morph back into the melodic. There are lots of complex layers and it feels like an assault on the senses. The musicianship comes to the fore and there are periods where the track slows and the vocals are absent. The engineering on this track is inspired, though the use of balance and flashes of sound.

“Judgement (& Punishment)” delivers a verdict of guilty from the outset. Guilty of infusing unlikely elements together – driving metal and reggae influences! It showcases the versatility and courage of the band. Again, light and dark elements are used well. It’s robust and dark, vicious and heavy, light and fun. Plus, the occasional cries of, “Booyah!” are good for a laugh.

“Retrospection” sounds like it has a dark past indeed, with Shmailyuk singing in her mother tongue. The sublime contrast of light and dark is front and centre, with sweet and subtle sounds tag teaming those deep and heavy. It’s powerful, melancholy metal. I got chills at one point… Clever harmonies are used and in the interlude, things got a little unsettling, before muscling up at the end.

“Pausing Death” bangs on from the very beginning, with it being frenetically paced. As a car person, it sounded like knocking pistons. The sound is disquieting and a little irritating – which is its intent. The track has many layers and is a hard listen. But, it is a comfortable discomfort. The interlude features few instruments, but their sound is more obvious and less distorted, adding a new element to the album.

“Noah” has 40 cubits of the famous tale, told from a different perspective. It’s a galloper of a track, featuring staccato percussion. Melodic vocals are used against a metal background, adding to the diversity of this album. In terms of sound, it’s another confronting offering, with dirge laden guitars serving up abundant atmosphere.

“Home Back” features an amazing, rollicking, bass-driven opening. It’s about war in the Ukraine and the musicianship is nothing short of ferocious. The sound is somewhat off kilter, which is appropriate, given the subject matter. It’s an emotional tale, told intensely and a more obvious bass line is woven throughout the track. Then… the interlude is lounge-like! Sweet vocal harmonies! Light and dark, once again.

“The Prophecy” features hyper engineered percussion. Every instrument is present and is played quickly. The vocals are deep and robust, but are less hurried. The pace slows, but not the intensity, before thrashing forth once again. It’s another challenging listen, with venomous riffs infecting the track throughout.

“leinnereP” piqued my interest immediately – “Perennial” spelt backwards? How is Jinjer choosing to leave us? Differently, that’s how. The first 46 seconds are played backwards. It sounds apocalyptic or religious. There’s clean piano and a sense of melancholy grandeur, peppered by raindrops that sound engineered. The lyrics are whispered and they are urgently conspiratorial. It’s largely instrumental, samba-like in places and machine-like in others. An ethereal echo closes out the track. It’s like nothing else on this album and is like a sorbet after a meal, cleansing your palate. Just… wow…

Jinjer is the Two Face of music. Like I said before, “Half polite, half evil, all crazy. Half light, half dark, always disquieting. The character always unsettled me – I never knew what was coming next – but I couldn’t turn away…”

Shmailyuk’s vocals are like you’re listening to two people – a ferocious beast one moment, a soulful presence the next, then, both together. It’s like she’s related to Chris Motionless. Or, Two Face.

Each track contained elements of the ones around it, but each one also lives a life of its own. At times intense and brutal, at others soothing and melodic. I never really got comfortable, alert for a probable imminent assault. I liked that feeling. A lot of music is predictable and whilst there is a place for that, I like to be challenged from time to time.

This album is instantly absorbing and it grabbed my attention immediately. Each track is a journey, an experience in itself. The musicianship is first rate, with intricate attention to detail. It’s varied and versatile, but it’s also consistently ferocious.

The more you listen to this album, the more you hear. Some of the lyrics are abundantly cleaver. In “Judgement (& Punishment)”, nestled comfortably was, “We came from the lands where kindness equals weakness, Feelings are conditional, and help is something supernatural”. Laying in wait in “Pausing Death” was, “And the next day nobody died: although nobody really lived. Philosophers opened the disputes: Is the mystery a mercy or catastrophe?” But what really messed with my head was, “I keep on losing the keys from reality, and now I’m passing on the wheel to insanity”.

The album title of “Macro” is appropriate, given the wide ranging vision used across it. All through the album there is significant depth, be it vocally or musically, or often, both. Despite listening to it a few times, I was still saying, “Did I just hear that?”

Given the broad range of styles and sound on this album, Jinjer could easily make any brand of music that they liked – samba, reggae, pop or lounge music. That they have chose this genre (for now) signals their commitment to it. The result is an engaging fusion of intriguing styles, intricately woven into a compelling result.

On a side note, in my research for this review, I kept coming across the word “djent” used in association with this band.

This was a new word for me, so I asked Wiki: “Djent (/dʒɛnt/) is a subgenre of progressive metal, named for an onomatopoeia for the distinctive high-gain, distorted, palm-muted, low-pitch guitar sound. Djent as a style is characterized by progressive, rhythmic, and technical complexity accompanied by a dense layer of polyphonic groove. An example is the song “CAFO” by Animals as Leaders. It typically features heavily distorted, palm-muted guitar chords, syncopated riffs, and polymeters alongside virtuoso soloing. Another common feature is the use of extended range seven-string, eight-string, and nine-string guitars.”

I play a bit of guitar and sometimes uses this style. I guess that I am an amateur djentist.