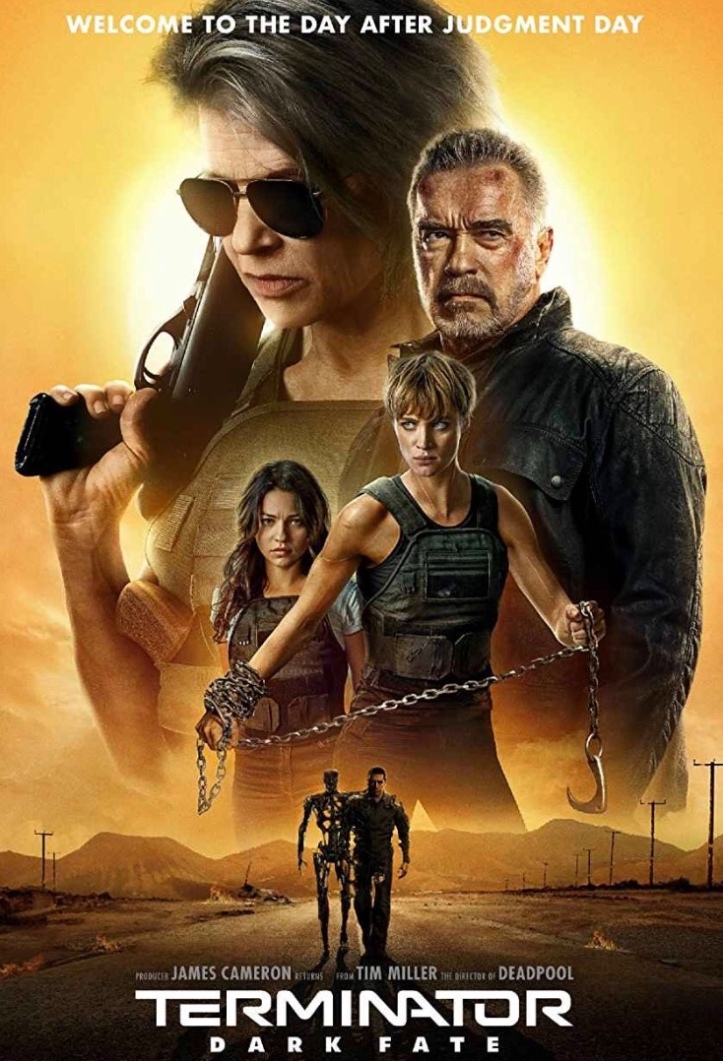 Sarah Connor and a hybrid cyborg human must protect a young girl from a newly modified liquid Terminator from the future.

It was unknown if another Terminator film would follow up Genisys, but when word surfaced, people were still unsure. Then PROOF of the return of Linda Hamilton sparked interest, a reunion of Linda, Arnie and James Cameron set of the guns of fans hearts blazing.

Dark Fate starts off with a grim, yet well shot opening, setting us up for 1 of 2 surprises ( NO SPOILERS). There’s then pace and a slow build up to ACTION. There is enough action to satisfy, comedy when needed, exposition which can either bore you or let you breathe.

Linda’s acting is emotional and very strong, it’s great to have her back, and the chemistry between her and Arnie is great ( he’s fantastic, the one liners get the laughs as always, Arnie is the franchise).  Yet Hamilton takes the lead, as it’s been Sarah Conner’s story her journey.

Sure, Mackenzie Davis (Grace) offers a committed role, but her character isn’t anything new or exciting ( a concept started with Salvation, BUTCHERED in Genisys and, just a gimmick here). The villain is a new Terminator known as Rev9 ( played by Gabriel Luna) where it bares many similarities with the T-1000 and TX with it’s mimicking ability and shapeshift/forming stabbing arms. This Rev 9 can multiply, so it makes it twice as dangerous and the design is pretty cool. Gabriel does a fine job as a Terminator, his lack of emotion is done with care for the character, and he may just be the best villain since the Tx and T1000.

Junkie XL supplies the score and captures the charm of Brad Fiedel ( who scored the original and T2). It’s a pretty good score and each piece suits the scenes well. The worst part would be the airplane scene, the effects are very cheap looking and it comes across as a fast and furious moment, just something not Terminator like, a simple road chase or the helicopter chasing the plane and crashing into it would of been far better. All in all, a more focused entry to the franchise and step up.