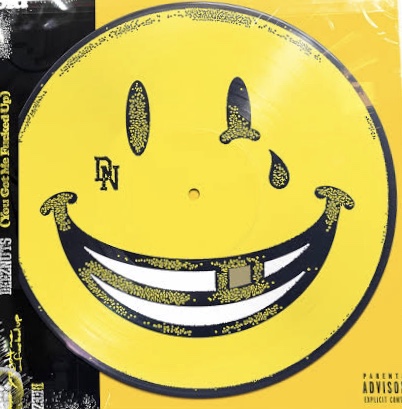 Deez Nuts was created by JJ Peters in  2007, after the disbandment of I Killed the Prom Queen.  Heavily influenced by hip hop and hardcore, Peters merged the two sounds to become the staple of Deez Nuts, often referred to as rapcore…

Through six full length albums in a little over a decade, Deez Nuts have become massively successful, constantly touring, particularly on the festival circuit, and while their sound is not going to appeal to everyone, as I took the time to listen to the latest offering from start to finish (I have heard plenty of Deez Nuts tracks previously, but never taken the time to play a full album), I was pleasantly surprised by what I heard, so much so, that I hit play again straight away…

Singalong kicks off proceedings with a bouncy, quite catchy punk rock influenced track, one that very much lives up to its “singalong” title.  Musically it’s really good.  Lyrically, it’s a little sophomoric, but the bands name is Deez Nuts – so we expected that, right?

The title track is chunky and a rhythmic beast.  With its gang vocal backing, against the heavy riffs and hardcore style vocal delivery, I’m put in mind of Biohazard, and that’s a good thing – damn I miss that band.  The chorus of this track is a little repetitive, but all the other elements make that forgivable.

Now that the Biohazard comparison has wormed its way in, its had not to hear elsewhere.  It’s rearing it’s head again on Crooked Smile.  Peters’ vocal style is very similar to that of Billy Graziadei, and becomes even more interesting during the very clean and pop flavoured vocal in the chorus of this song.

You Gotta Feel Me takes the “rapcore” vocal delivery, the huge riffs and powerful rhythms, and combines it all with a pop sensibility that makes for an interesting package.  The whole album has been produced in a way that plays to the bands strength.  There is a lot of emphasis on the bottom end, and it sounds great as a whole.

On Some Shit has a massive rumbling sound, and the scathing lyrics are spat out with plenty of vitriol.  Dtdfl4Eva is anthemic, completely catchy, and a highlight of You Got Me Fucked Up.  With lyrics like “make no mistake, every day above ground in the underground, that’s a good fucking day”, you know that Deez Nuts has been through some stuff.  Some will say it’s just an image thing, but I’ll stay out of that argument, just know that the song is good.

Fools Gold is groovy, and will incite activity within live crowds, particularly towards the end, while Axe to Grind is another anthemic track, one that just begs for a bit of call and response action with crowds.  It’s heavy, and well executed, especially when it speeds up and becomes unhinged in the mid section.

Get A Grip features heavy riffs and rumbling bass that makes for a great musical backdrop, but as far as the vocal delivery is concerned, it’s not too far away from any other track, yet I just could connect with this one.  I’m not sure why that is.. it just is.  In the dying moments, there is a really loose sounding riff that is heavy and absolutely awesome, though..

Closing out the album is Bitterest End.  It’s musically, one of the heaviest tracks on offer, with stuttering riffs and some great drumming.  Vocally, it’s a hardcore anthem, until the chorus hits, and then it’s quite different, even making use of vocal harmonies.  It comes together really well.

I had no idea what to expect from this record, but I thoroughly enjoyed it.  I think what I liked most of all, was that it didn’t command my full attention through complexity and thought provoking lyrics, but earned my full attention anyway, simply by being a really fun listen.