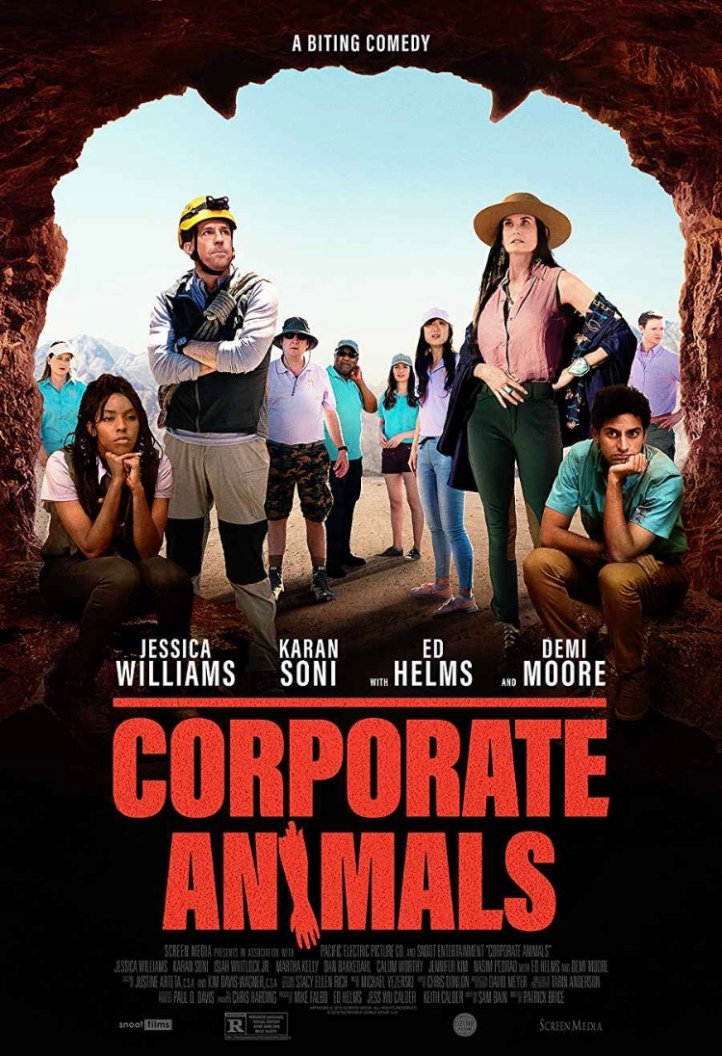 Lucy (Demi Moore) is the egotistical megalomaniac CEO of Incredible Edibles, America’s premier provider of edible cutlery. In her infinite wisdom, Lucy leads her staff including her long-suffering assistants, Freddie (Karan Soni) and Jess (Jessica Williams), on a corporate team-building caving weekend to New Mexico. When disaster strikes, not even their useless guide, Brandon (Ed Helms), can save them. Trapped underground by a cave-in, this mismatched and disgruntled group must pull together in order to survive.

Corporate Animals is a black comedy, that explores how rapidly the social order declines, when a group of people are trapped in a seemingly inescapable situation.

Demi Moore is really good in the role of the greedy corporate villain – the boss, who although trapped with her employees, still underhandedly tries to make the situation work for herself and herself only.

Ed Helms isn’t around for long.  His role is more of an extended cameo.  As for the rest of the cast, they’re all relatively unknown, but do a great job of playing in this “lord of the flies” style situation.

It’s well scripted, which is key to this movie, when you consider that the majority of it is based around a group of people, stuck in one place with not a great deal to do.  Kudos to the writer, Sam Bain.  Likewise for the director, Patrick Brice, who’s work has mostly consisted of low budget horror thus far.

There are laughs, but of course, they are of the cringey variety – where we probably shouldn’t be laughing – but we do anyway.  There’s a scene involving a bit of projectile vomiting that is quite amusing.

Low budget fair, when done well, is often better than some of the grander scale movies that are released.  This is not the best of them, but certainly worth a watch.