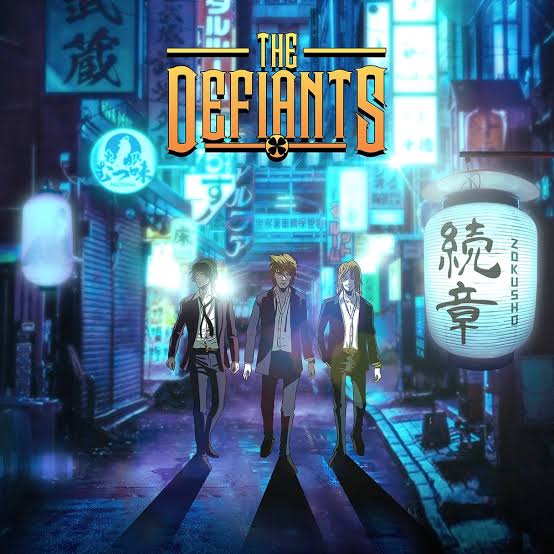 This is the second album from The Defiants.  Fitting then, that Zokusho is the Japanese word for sequel, or next chapter.  Four years since the release of their stellar debut, former Danger Danger members Paul Laine, Bruno Ravel and Rob Marcello have reconvened and recorded it’s (quite possibly better) follow up.

Love is the Killer is the opener, and it’s a great indicator of exactly the kind of album we’re in store for.  Catchy melodies, big hooks, huge choruses and some wonderful guitar.  There’s something about this music that just pumps you up, for any occasion.  It’s bold and upbeat.  Really feelgood stuff.

Standing on the Edge carries us through with plenty of guitar, while Hollywood in Headlights has an unmistakable swagger, as it takes a stroll down memory lane.  So far, this is an album for anybody who still craves the hey day of glam (or hair) metal, when the hair was huge, but the tunes were even bigger.

Fallin’ For You is completely and utterly infectious, Hold on Tonight dips a toe in power ballad territory, and we all knew that was coming, while Allnighter is the party anthem, celebrating those that “hang on til the end”.

U x’d My Heart might deserve the award for worst song title, but the song itself isn’t so bad.   It’s bouncy and catchy, and makes exceptional use of backing melody.  It Goes Fast features a lot of keys, but it’s easy to like – up tempo, catchy.

Stay offers a late highlight, as it features another sing along chorus – much like all the other tracks, there’s a lot to like.  Alive is very akin to modern pop rock, and it’s jangly guitar will put you in mind of U2.

Album closer, Drink Up! is a country infused foot stomper.  Perfect for getting the party started, and will be best played at volume!

This is a great album, and very easy to get caught up in, as it carries us from one good time to another.