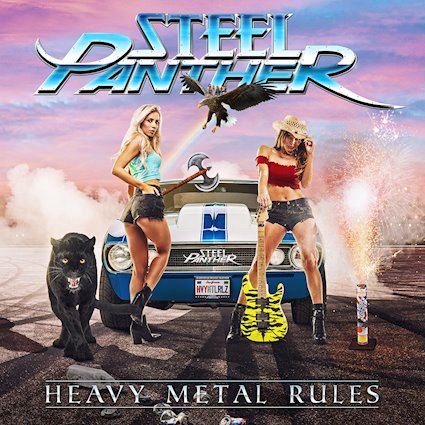 The 2009 debut from Steel Panther, Feel the Steel, was awesome, and remains in rotation in my car.  2011’s Balls Out had some great moments.  On 2014’s All You Can Eat, the joke was wearing thin, and by time Lower the Bar was released in 2017, I was well and truly burnt out on Steel Panther.

What was once funny had become stale to me.  The music is still fantastic – a throw back to glam metal at its high point, but lyrically, no matter how good Michael Starr sounds, I was over the juvenile content.

Now, with the release of Heavy Metal Rules, there’s been enough time passed for me to dip back in to the wonderful party atmosphere of Steel Panthers music, and find out if a little break was all I needed to start appreciating this band once again.

Zebraman kicks off proceedings, and it’s a 35 second intro extolling the virtues of heavy metal, and how it’s the best style of music out there.  A silly way to open up, but then a mammoth drum roll fires up All I Wanna Do Is Fuck (Myself Tonight) and this is vintage Steel Panther.  Blazing guitars, wildly inappropriate lyrics, and Michael Starr sounds phenomenal.

Let’s Get High Tonight continues the party.  If the band isn’t making music about sex, drugs is their next go to move.  Of course, even the drug songs are mostly about fornicating…  So far, Heavy Metal Rules is the same old band, with the same old tricks, but it is all coming together better than the last two albums.  It’s silly party music, and I can see why people in certain circles are quick to dismiss it, just as easily as I can see why it’s as hugely popular as it is.

Alway Gonna Be A Ho is up next, and it’s one of those ballad type songs that the band do so well.  Gentle acoustic strumming is the backdrop to classic lines such as “I kissed your mouth and tasted Satchels dick”.  So far, this is the highlight of the record for me.  Musically excellent. Lyrically hilarious.

I’m Not Your Bitch features some of the best riffing and shredding of the bands career. This is another highlight for sure – big and bold choruses, blistering guitars, and some great vocal harmonies.  Even if you can’t get on board with the lyrical content, you can’t deny how hugely talented Steel Panther are.  I would absolutely love to see them ditch the comedy element and unleash what could possibly be the best metal album in decades.

Fuck Everybody – a title we can all relate to at some stage (possibly multiple times) of our lives.  This is THE song to listen to when the world is frustrating you – I may just have to begin every day by cranking it up.  It’s all about the annoying little things that escalate in to big things.  Easily relatable.

Title track, Heavy Metal Rules, is a lament to the death of rock n roll.  Classic lines like “I’m never gonna stop playin’ even though rock n roll ain’t payin’, coz heavy metal rules” are scattered throughout, and the track features call backs to the intro piece (which is from the doco Heavy Metal Parking Lot).

Sneaky Little Bitch is a fairly standard Panther track.  Silly lyrics coupled with great guitar work – and there’s an awesome wail from Starr here too.  Gods Of Pussy is exactly what you think it’s going to be based on the title – well executed though, and lyrics like “making ‘em hurt while we’re making them squirt” are hard not to giggle at.

Lastly, I Ain’t Buying What Your Selling is a perfect example of what a top quality vocalist Michael Starr actually is.  An acoustic track, with an almost country rock tinge – the humour remains, but there’s a lot more feeling here.  This proves to be another highlight.

So when all is said and done, I have enjoyed Heavy Metal Rules a great deal more than Steel Panthers last two studio releases.  They are undoubtedly exceptional musicians, who definitely don’t take themselves too seriously, and while I think I’ve outgrown the punchline, at least to a degree, I have no doubt that this band will continue to be hugely popular for a long time to come.