Leaving Eden are a 5 piece group of genre defying musicians.  Having just released their latest album – the fantastic, The Agony of Affliction, Shayne spoke with co-founding guitarist Eric Gynan, about the band, their achievements and their future… 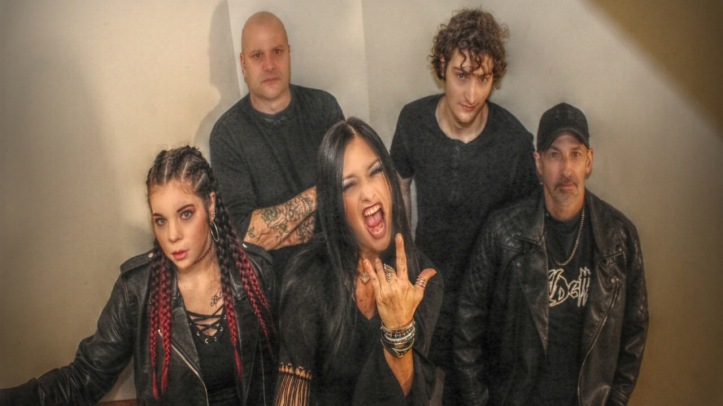 We were thinking about this whole planet being like the garden of Eden and with all its corruption and deception wouldn’t it be nice to just go somewhere else, thus Leaving Eden.

Leaving Eden is from the Boston Massachusetts area, USA.

We’ve been together well over a decade.

We consider ourselves a multi-genre band, although we’ve won some awards for best metal and best hard rock band, we do have a lot of heavy songs but we also got some acoustic stuff and some mainstream.  We’ll even put some dance beats in there.  So it’s pretty hard to put us in a box.  In fact I remember we went to this recording studio and the woman sat there and drew a box on the whiteboard and said you guys are all out here and you should be in here pointing inside the box.  No word of a lie – and I said excuse me are you saying we should be in that box and she said yes and I said thank you very much have a good day got up and walked out.

Myself and Eve, the lead singer, are the two co founders of Leaving Eden. We’ve gone through many personnel changes throughout the years and the current lineup I feel is awesome with David Amato on the bass/Backing vocals, Alyssa White on Keys and backing vocals, Jake Gynan on drums myself Eric Gynan on Guitar and vocals and Eve on lead vocals

Well as we are a multi genre style band we also have multi genre influences from Disturbed, Shinedown, Pop Evil, to Simon and Garfunkel, Jim Croce, Fleetwood Mac and everything in between.

We have just released our newest album “The Agony of Affliction” released by Dark Star Records/Sony. The Title Track will be in Massimiliano Cerchi’s movie Lockdown starring Michael Pare (The Philadelphia Experiment,  Eddie and the Cruisers).

Watch the Lyric video The Agony of Affliction:

Watch the teaser trailer For THE NITWIT MOVIE

Originally I had written this movie script loosely based on real life events with the intention of having Leaving Eden’s music throughout the movie and procuring other pros to make the movie. Where Leaving Eden has been involved with having our music placed in different movies and TV series this simply made sense. While in Iowa after wrapping up on a shoot I sat down with Ray Van Blarcom and Matt Moody “production crew” over a scotch and threw the script down on the table. They started reading it, thought it was hilarious so we decided let’s make the movie. For me being the director of several music videos it was a very simple transition to direct The Nitwit. Finally, I was intrigued by Matt Moody’s experience not only in production but as an actor. Ironically Matt fit the leading role as The Nitwit perfectly then he also brought in Jordan Smith as his costar and the rest is history. We expect the movie to be released in 2020 by SGL Entertainment.

You can find Leaving Edens albums all over the world wide web wherever music is sold or streamed like; iTunes, Spotify, Amazon all those places if you just go to our website you can be directed

I found that if you don’t set your goals too high and be happy wherever you’re at in your music career and that makes it a whole lot better.  There have been times when I’ve set very high expectations and with setting those you tend to get let down and you really need a thick skin to continue. I see so many bands just simply give up throw in the towel because they probably set too high of expectations for themselves. I think any band that records their own music has hopes and dreams of becoming the next big thing. We are no different however we are happy doing exactly what we love to do and that’s what is most important.

I get asked this question a lot and my answer changes because there’s just so many good bands out there today.  I would say Fleetwood Mac with Lindsey Buckingham. Not only do they sell out but they just sound so damn good live. I was actually excited to catch their tour but I found that Lindsey Buckingham was not going to be there so I will wait until he’s back.

I always say Leaving Eden is best seen live. There’s a sharing of the energy that happens and it can’t possibly happen just by watching a video or listening to the music. Eve is really second to none as far as her connection and performance.  I consider the band to be very tight live as well so you can expect the songs to sound like the album.

That’s a tough question. As I said, I believe Eve is second to none. It was after the first 100 people came up to me and told me how great she was not me her. I decided I should do something about it. We were able to get some of the best musicians in New England as far as I’m concerned and I think most importantly it’s the Energy and confidence on stage. I’ve seen bands go out there and the crowd, people are almost like animals they can sense fear and if there’s any sign of fear or even anxiety they sense it and they’re just waiting for you to screw up. If you go out there with confidence then they’re just looking at how great you can be. I think the music speaks for itself very lyric driven with lots of harmony and Melody.

Well I think these two questions go hand-in-hand so I think there’s lots of music and there is something for lots of people I’m not going to say everybody because you cannot please all the people all the time and there are haters out there everywhere. That’s OK with me I don’t mind at all. The main reason why I play is because I enjoy it. It’s my life. I think that knowing that the lyrics are based on reality in someway and the struggles in life and between good and evil in all of us. The struggle is very real and that’s what I like to write about.

Well I am a voting member of the Grammys and I do submit Leaving Eden. It would be great to get a nomination but that is very difficult.

I think as we continue to get more into movies I expect that will grow exponentially.

For More Info on Leaving Eden go to:

You’ll find all of our social media links YouTube videos tour schedule bios and everything Leaving Eden right there. You can contact us there too.

Thanks so much for your time!

It’s been great chatting with you here man and loved the questions, very in depth for sure.  Peace!