His latest album, Hollywood’s Bleeding, has been released, and while I’m sure it’s doing big business for him, I have no interest in reviewing it… it’s just not my thing.  I am interested however, at taking a listen to one track, Take What You Want, which features guest vocalist, Ozzy Osbourne.

Many people may not know that Post Malone is actually a very capable guitarist, and he even started off his career in metal bands, notably auditioning for Crown the Empire back In 2010.  He didn’t get the gig, but it’s safe to say that he bounced back pretty well, forging a career as a rapper.  Kudos to him.

Take What You Want opens with a very solo Ozzy feel musically before the prince of darkness himself makes his appearance, singing the opening bars.  From there, Post Malone takes over, with his very auto-tuned style of vocals.  Ozzy makes his return towards the end, before a guitar solo carries us towards the climax of the track.

It’s not bad overall.  Great to see Ozzy back on the horse – and if this collaboration sends any perspective new fan down the Ozzy/Sabbath rabbit hole, then I’m all for that.

It was a selection of tweets that first alerted me to this tracks release – and as funny as they are, I really hope that these people are taking the piss! 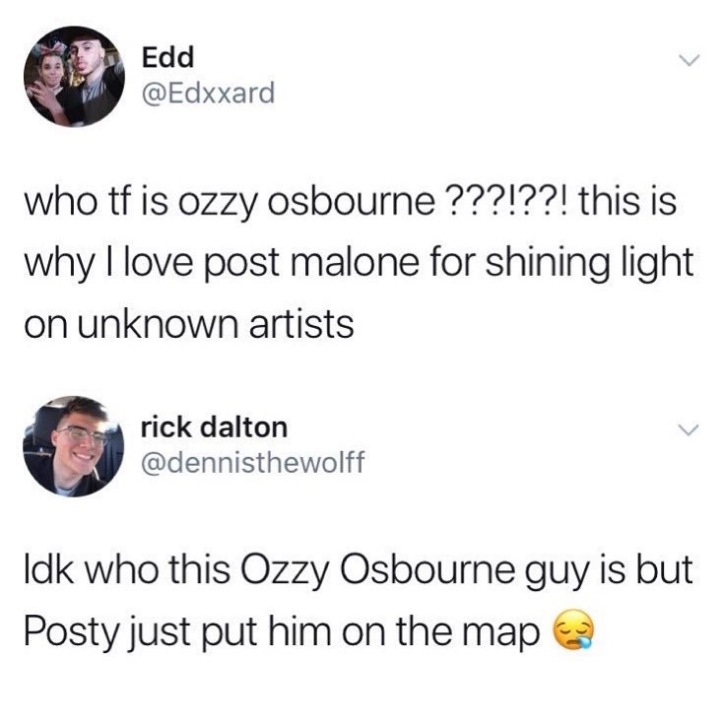