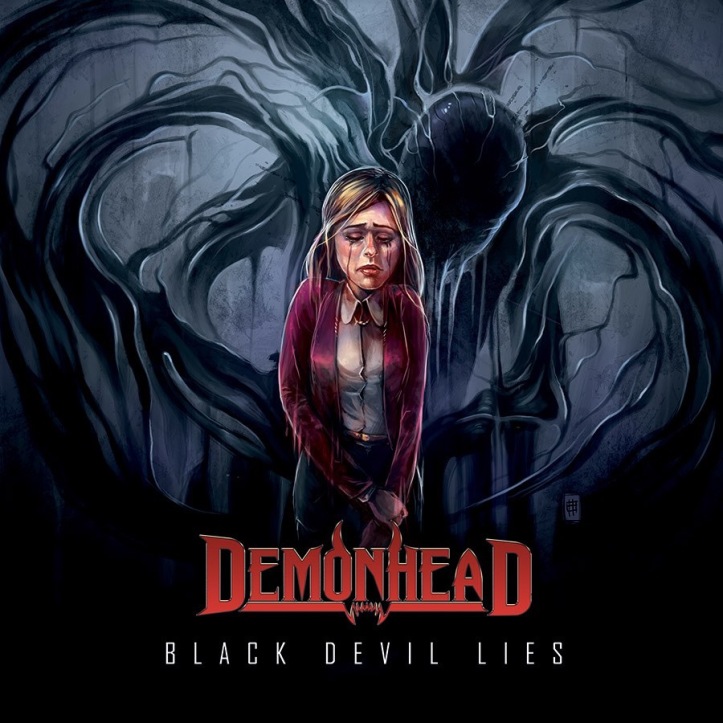 In our garage we have a few cars. One of them is the family taxi, a new bag of bristling technologies. It’s jam-packed with electronic stability control, four wheel steering, twin turbos, an electric hand brake, lane change warnings, four engine tune settings and the engine cuts out whenever you stop. Lurking across the garage is the hot rod: jam-packed with an engine that is 70 years old that takes 5 minutes to start, four wheel drum brakes, a speedo out of a boat that is in miles an hour, a grille from a tractor and the boot lid is the bonnet from a Morris.

But, more about that later.

Hailing from Melbourne, Demonhead have been around in various forms since 2007 and in 2015 released their debut album “Bring on the Doom”. During this time, the members of the band were challenged significantly by various life events. These included losing drummer Dave Godfrey (Meshiaak) and guitarist Rüe requiring emergency surgery for a life threatening condition.

Vocalist and guitarist David Lowes described the challenge that this presented, explaining, “His health was so bad that we thought the band wasn’t going to continue.”

He went on to say, “Everyone in the band had been facing adversity over and ‘Black Devil Lies’ is a metaphor for the dark thoughts that linger behind the surface and make us question ourselves and our existence.”

Demonhead took a break until 2017 until Rue was ready for more shenanigans and the band included Dean (from Horizon’s Edge) in their lineup.

I listened to this album with no expectations – I hadn’t heard of the band until this morning, when I picked this review from our list because the band and album names sounded cool. The 10 tracks have a duration of a little over 40 minutes.

“Against the Grain” rubs you up the right way with a laidback opening that is melodic and relaxed. I was nodding immediately and actually got chills. The vocals don’t surface until later in the track than is usual – a technique that is often used on this album to great effect. The track speeds up considerably and David Lowes’s vocals are intense and understandable, bonding you with the music. The guitars stand out, over and over. The work is clean and clever. Tempo changes are used well and the music is robust and engaging.

“Betrayal Avenged” speaks of betrayal and suspicion. The guitars are perfectly paced and I very much appreciated the engineering of this track. The riffs are powerful and I was foot tapping along in no time. The lyrics were very cool, with examples being “scavenger feasting on decay” and going “until the bitter end”. This track will resonate with anyone who has ever felt betrayed – yes, all of us. Another terrific guitar solo is used to enhance this track.

“The Ritual” ceremoniously opens deeper and darker, with a slower, ominous texture. The guitar layers are done exceptionally well. This track is light on vocals, with the instruments doing the majority of the talking. It’s simple in nature, but big in impact.

“Children of the Night” is faster in nature, with double-kick drumming adding to the sound. At one point, we are urged to “stand together, forever united”. I’m in! The track continues along a frantic path, before slowing and morphing into a more staccato, righteous feel. It had me wondering where this was going… The strong and complex sound has calmer vocals, a cogent counterpoint to what is occurring. This track had me thinking about the rallying and unifying component of music – that it’s ok to be different, that you’re not alone, that you can find unity with other in melody…

“Blood Debt” has a driving introduction and I think that this would be a killer live track. The guitars again are the stars. It’s musically absorbing and craftsman-like in its elements – the lead and rhythm guitars fuse into a remarkable beast and the engineering utilised is stellar.

“Black Devil Lies” have superb guitars as it’s truth again – they are driving and thickly textured. An early solo surprised me and the vocals remain robust and accessible. A second solo features and we are advised that “evil is coming: start running”. Not a chance! This is too good!

“Eyes of the Insane” has a crazily addictive melodic opening, with the percussion adding weight. This gradual build up is superb and engrossing. It then leaps forward with the familiar faster riff style, before changing character again. The vocals arrive later in the track –  a style that I have come to enjoy from this band. The track is about having a tortured soul, losing self-control and having haunting memories. Again, we’ve all been here and can empathise with the message.

At this point, I wondered how Demonhead was going to keep this up. I need not have worried…

“Zombocalypse” makes social commentary about the state of humanity. The track rises up from the background, like a zombie escaping the grave. The track is filled with focussed intent, as it describes the world descending into chaos. A well timed solo emerges and it’s another gem of a tack. Is it wrong to want a shirt based on the content?

“Double Cross the Dead” is slower in nature to start, but is then enriched by a complex overlay of guitars. It’s confronting in nature, with us being told that “I’ve never felt pain like this before, don’t double cross the dead”. It slows to an anthemic feel in the middle and I got a sense of regret. It’s fanciful and dark in nature – all the more worrying as I was singing along at first listen…

As usual, I wondered what the band was going to leave us with as their last track.

‘Face Your Demons” confronted me with abrupt, staccato riffs. The vocals are whispered ominously at the start, before again developing in complexity. The lyrics included messages such as “you feel there is no way out”, dealing with self-doubt, arising, fighting and facing your demons. With such subject matter, it could have been predictable and silly, but it is done well and in an empowering manner. After all that challenging darkness, the message that Demonhead has chosen to leave me with is one of strength and hope.

The album sounds as if the negativity and challenges of their last few years have been used as subject matter for the tracks. There’s obvious anguish and intensity; but there’s also optimism and self-empowerment.

The driving riffs are cornerstones of each track and the vocals of David Lowes are powerful and easy to understand, making them engaging. The guitar solos are well crafted and twin guitars are used to great effect. I also really appreciated that the tracks aren’t vocals heavy – the instruments do a lot of the talking.

Back to the hot rod: driving an old car versus a new car is a totally different experience. When you drive the new car any distance, all those myriad of elements means you arrive feeling calm and refreshed… but you’ve been a bit of a passenger in the process. Drive the hot rod any distance and you have been in control of the many elements, you feel like you have been a partner in the journey and you are well satisfied with the driving experience. The experience is simple, elemental and not chock full of self-indulgent elements.

Like this record – you have been a partner in a great journey.