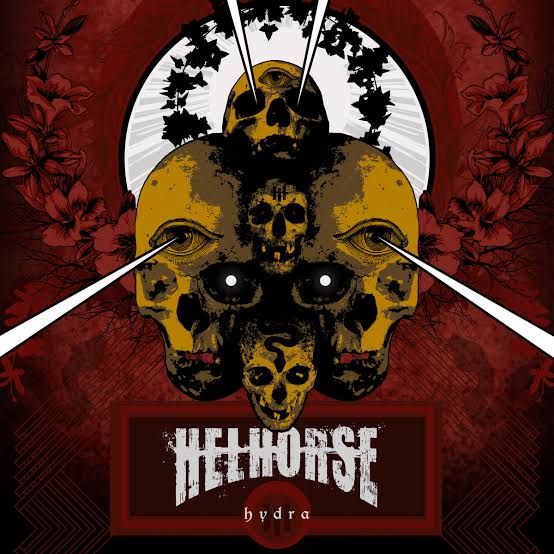 Hydra, a mythical creature of great power? or a group of soldiers led by Red Skull?  No, it’s the new album by Helhorse.  Of course there are such inspirations of the aforementioned – there’s skulls on the cover and it’s red and Helhorse are soldiers providing great power with this album.

Overboard opens the new release.  It’s a solid hard rock offering, like being welcomed to a main event, which is this album.  Avalanche is the second song and one of the singles, this song is one for the road, quite a cruise.  The chant during the chorus is an interesting addition.  Outcome: Ruin is third.  It’s slow building start has you wonder what’ll come next, then it hits you in the face, causing instant head-banging.

Circle of Vain Attempts is the fourth song and this is an anthem, one to wake you up for a long day. Things get better along the way.  The fifth track is Northern Lights, a beautiful power ballad placed nicely after the rock-metal blessings.

Hydra is the title song and it’s a deep and dark doom track ( think Sabbath.  And THANK Sabbath for the influence).  What a track, ya’ll hail this track.  Crystal Blades cuts you with it’s bass intro and then pummels down like a tonne of metal, get ready to break your neck. Scarlet Meadow Scarlet Brook is for the thrashers and the elite enthusiasts. This one will have you get right into the pit, full circle. Under A Bad Moon has a borderline industrial riff, and is a flavoursome rhythmic groove beast of a song.

War Drums is the last song.  We got some bass starting things and then POW, this is a fine end to a supreme record of satisfactory emotional work by the band.  Vocals: Mikkel Wad Larsen-has a strong range, he can go from clean cut to deep and raw and provides some good roars and growls. He is a masterful singer, using his voice wisely for each part of the music, and has a good pace when expressing emotion.

Guitar: Jakob Møgelcunt, not only offers up a variety of exciting riffs, majestic melodies and fully loaded solos but has each part thought out well. The nature of his craft is inspirational; he’ll surely keep keen metal lovers happy. Bass: Theis Thorgersen, has a few times to shine here, whether it be an intro where he explores the frets to give an awesome jolt, or an interlude, either way, this is an adventurous bassist, such fluent grooves and licks. Drums & backing vocals: August Vinther Ottsen – well, August can surprise you with his choice of beats and how he’s timed each fill is as impactful as his delivery.

August is well equipped and makes use of each drum and cymbal for a focused performance. All in all, Helhorse have given an apocalyptic demonstration here, each song has it’s own style and the setting of each song makes Hydra a fluent record. All eggs weren’t put into one basket, just spread evenly, to say more would spoil what’s installed for you. you’re left wanting more.