York on Lilydale was full of keen fans who flooded the floor for Killing Heidi, though first, the people saw the wonderful and surprising Dallas Frasca. Before this support band took the venue by storm, it looked like they were a 3 piece, when drummer Liam Burgan and guitarists Jeff Curran and Jack Wieseler took to the stage. Next 3 other members ran on all smiling, this was the Glitter Bitch Club, 3 back up vocalists. Then Dallas herself made a grand entrance. All was set, and HOLY SHIT, this band is amazing.

The music is very artistic and the musicians are very creative. They give you rock and roll like the legends, have a pop charm, yet push the experimental progressive envelope to the next level. There’s no bassist, just 3 guitarists ( using peddles for a bass effect) the use of different time signatures, the 3 back up vocalists providing numerous dance moves, Jeff and Jack’s chemistry was like a cocktail, a nice mix of personality. Liam made sure to get a solid work out behind the drums and Dallas, ripping a few riffs and singing out over the crowd about love and life, made this the whole package of a great and unique band.

Immense cheer and claps deafened the venue after Dallas finished their set, it would be half an hour before Killing Heidi.  The line for drinks was huge, but time passed and an eruption of cheers, whistles and claps blossom as Killing Heidi open their set with Calm Down.

After Ella coaxes the people on with her energetic stage presence, the people calm down with this nice and easy opener. Next song is I Am, this anthem about individuality gets the crowd roaring and the addition of double kick by Adam Pedretti gave the song a metal edge. Ella then talks to the crowd about former shows and how great it is to be doing what they do, and the crowd responds in a loud cheer. 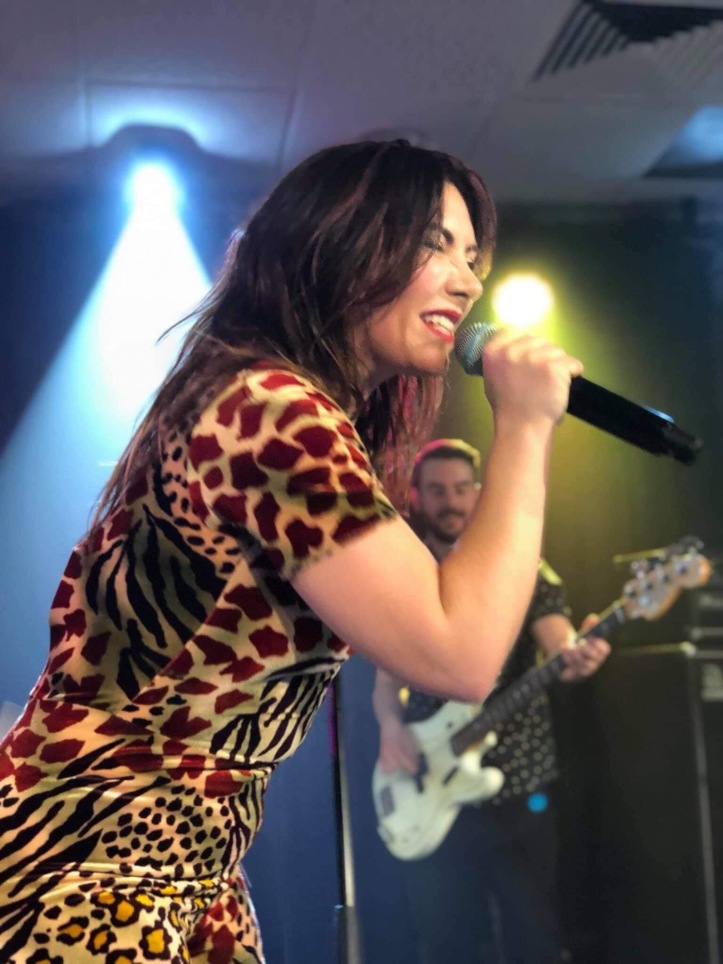 There was barely any room to move, all you could see were waves of people moving to each song. The band’s performance was ecstatic, Ella is a natural, constantly interacting with the crowd, Jesse ( guitar/backing vocals) was rocking it like a cowboy in his black hat, he also told jokes and reflected of the early days. Adam absolutely hammered the drums with extra beats and crazy fills. Joshua Jones was in the right place and had a right ole good time, and showed us how much he loved it with dedicated playing.  Lena Douglas is on keyboards and provided backing vocals, this added extra dimension and Lena was having a ball.

Killing Heidi made sure to take things slow with a couple of soft songs before getting back to rocking out. Then, Mascara was played and it was one of the best received songs of the night. Being a main hit, this trip down memory lane was as great as hearing it for the first time. All was going very well, this iconic band shined brighter than the lights and after getting the people to keep moving they finished with Weir.

Their main track, it took off like a rocket. Having brought all the people together to sing with and for Ella, made their 20 year career worth all the time, touring and parties. It didn’t matter how big the stage was, nor how tired the members were, Killing Heidi made sure they were massive to the mass crowd. During Weir, there were some tricks before the chorus, this was a fun little jam. After their ”last song” Killing Heidi bid fairwell and left the stage. A road-man/tour manager came out to thank the crowd, then Killing Heidi returned as they weren’t done yet. They then played Superman Supergirl, and no matter how warn out they were, they still had enough energy ( or angst as Ella said throughout the night) to continue.

Then for the actual final song, it was made special as Dallas was asked to join for a cover of a The Divinyl’s classic Boys In Town. Well, all was over after that song, a satisfied crowd and 2 amazing bands whom have been on a glorious tour. Dallas Frasca are out on the road and Killing Heidi are back as strong as ever. This was a well pleasing gig.