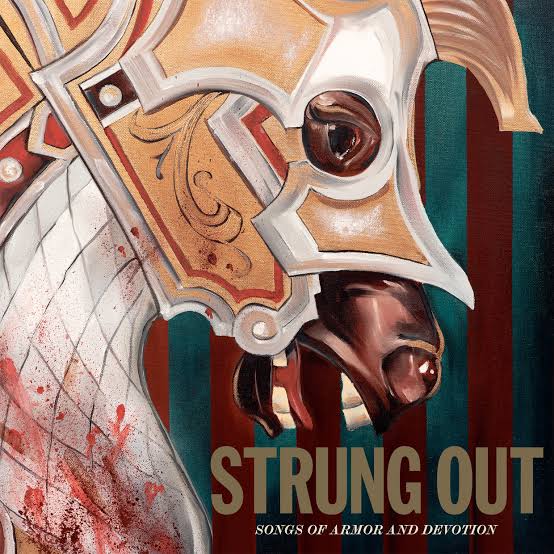 This is the ninth Strung Out record in a three decade career, and their first since 2015.  Songs Of Armor and Devotion follows suit with all of the bands previous output nicely – fast paced punk rock, accessible, but not sugar coated.

Rebels and Saints opens the album, and it’s a very radio friendly track making good use of melody and vocal harmonies, with a blistering guitar solo for good measure.  A very strong way to open the album indeed.

Daggers is more of a standout, and that’s due to the pounding rhythm and lightning fast guitar riffs.  Again, the chorus drips with melody.  This is a healthy blend of radio friendly fare from the likes of Green Day and less commercially accepted, though no less popular acts like Pennywise.

Ulysses is basically more of the same, while Under the Western Sky offers up a slightly more grizzled vocal and some exceptional guitar riffs.  This is THE highlight track in my mind.

Monuments provides the most unhinged moment, when the band really speeds it up and goes full punk rock tempo – but not at the expense of melody.  Props to drummer RJ Shankle for his immense rhythms, not just here, but throughout the whole album.

White Girls keeps up the pace, Demons opens up a little dark and ominous, but actually builds its way in to a huge anthem that will please crowds without a doubt, while Hammer Down is one of the heaviest tracks, featuring some great riffs and excellent vocal harmonies.

Disappearing City, Politics of Sleep and Diamonds and Gold all do their part to serve the album, even if they don’t offer anything particularly new to the bands arsenal.  Just pretty standard, by the numbers songs in the greater scheme of things.

Strange Notes on the other hand, features some ripping lead guitar and a chunky fast riff that boarders on thrash metal at times.

Bloody Knuckles is the closer, andxafter opening with some weather effects, the track comes to life as a catchy, power pop/punk anthem.  It’s a decent track, and a pretty good way to close out the album.

It’s no Suburban Teenage Wasteland Blues, but it is a worthy addition to Strung Out’s discography.