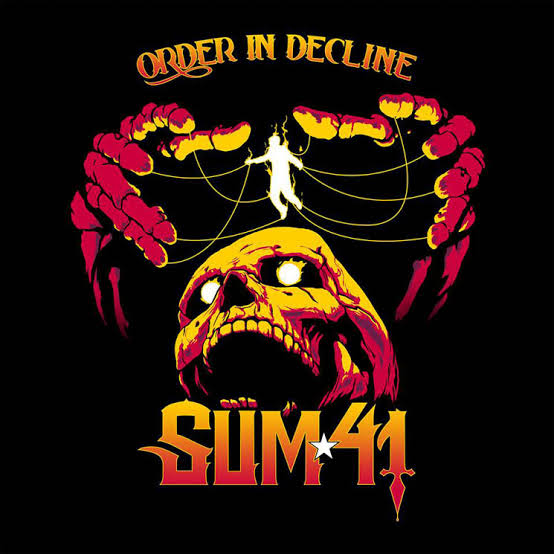 Order in Decline is an important album for Sum 41.  Where 2016’s 13 Voices album had Sum 41 making their “comeback” after a five year period that seen frontman Deryck Whibley almost die, this album is the sound of a band re-asserting themselves.  There’s a renewed energy and urgency here – the band has had some fairly low lows over the last decade, but they move forward, and now that they are back firing on all cylinders, it’s reflected in their music and lyrical content.

Sum 41 began as a pop punk band in the vein of Blink 182, but while Blink ditched the goofy cliches and headed towards a more mainstream and commercial style, Sum 41 chose to head down a darker, heavier path, often dipping more than just a toe in the heavy metal pond.  They are still recognisable as the group that gave us Phat Lip and In Too Deep, but there is a great deal more to this band these days.

Turning Away is anchored by sombre piano driven beginnings, before delivering a powerful riff, huge chorus and ripping guitar solo.  We’re off to a great start.  Out For Blood features down tuned riffing, and sees the band deliver one of the stand-out tracks of the album.  It’s definitely on the heavier side of Sum 41’s arsenal.

The New Sensation is almost pop punk meets industrial.  There’s a pulsating groove throughout the track – it’s relatively heavy, but you could dance to it.  Whibley’s vocals are really great on this one too.  In fact, he’s very solid throughout the album, and at his best when he steps outside of the pop punk bubble.

A Death In the Family is fast paced and aggressive at times, but retains melody, while Heads Will Roll is a foot stomping rocker with an impressive riff and some great vocal harmonies present.  45 (A Matter of Time) is a beast of a song.  It chugs along as it takes president Trump to task.  While you might not associate Sum 41 with political lyrics, they pull it off well.

Never There is a curve ball.  A tender acoustic number that sees the aforementioned pop punk bubble well and truly burst.  Whibley admits “I didn’t write Never There for this album, and didn’t think it would ever see the light of day”.  I’m glad it did make the album, because it’s a highlight.  It has more in common with Oasis than anything else, and it’s a very personal lyric as Whibley addresses his relationship with his absent father.

Eat You Alive brings back the riffs and picks the pace back up a little, but then The People VS.. builds on that pace ten fold.  It’s lightning fast punk rock – this will be a mosh pit inducing moment in the live setting.

Lastly, Catching Fire is a track full of layers and texture.  A ballad that is full of lost love.  The track is driven by a pounding rhythm, but Whibley’s pained vocals are the star here.

Order In Decline is a very good album – one that sees a mature Sum 41 shake the one dimensional limitations of their earlier days.  The heavier moments are great, but when the band step outside their comfort zone and throw a ballad in the mix, they really show us what they’re made of.