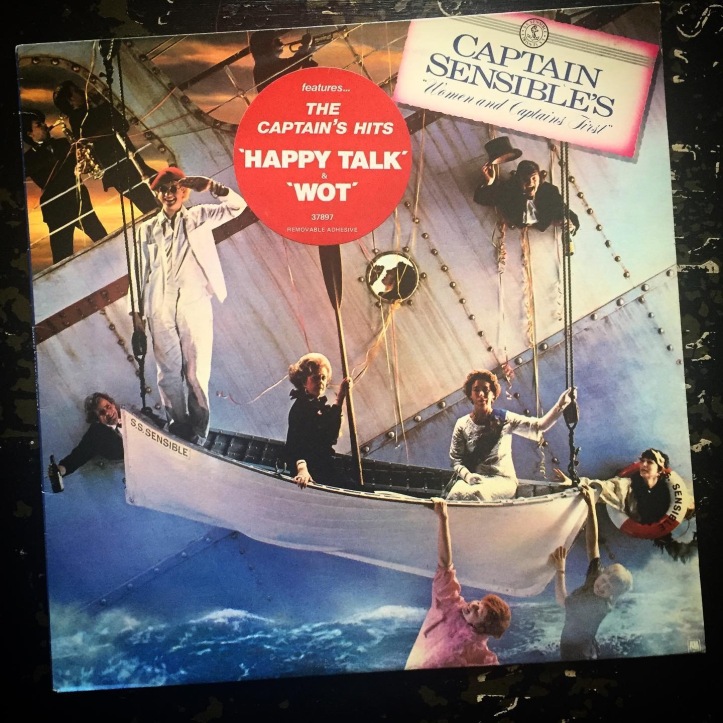 For a few weeks when I was in grade 5, walking around the playground it was only a matter of time before you’d hear a kid singing “I said Captain, I said Wot”. On the face of it, it’s just a novelty ditty, but bloody hell it’s catchy. Equal parts Chic’s ‘Good Times’ and Blondie’s ‘Rapture’, the Captain’s charisma makes it impossible to write this off as just a bit of kitsch. I’m not gunna say rush out and buy this, because although there’s quite a few cool little parts scattered throughout the album, it’s more something to chuck on as a bit of a diversion rather than something to get inspired by. I really liked the Captain’s odd songs that appeared on the Damned ‘Strawberries’ album, also from 1982, but for every ‘Don’t Bother Me’ there was ‘Ignite’ and ‘Bad Time for Bonzo’, rather than having an album of semi-pisstake songs, like on this album. Still, listening to this album on a sunny winter’s day fills me with contentedness – some things aren’t meant to be taken seriously and I’m sure the Captain’s in on the joke. Incidentally, a friend of mine used to always call me Captain Negative – what can I say, I’m an honest guy and the world is a pretty shitty place sometimes. And that’s why we need the Captain, to remind us that life is fucking absurd.

I can’t speak highly enough of the first two Demon albums – two of my favourite albums for nigh on 30 years and great slabs of pseudo-Satanic British hard rock. For this, their third, they developed a slight prog/AOR vibe which I wasn’t a fan of at first. It’s light on the memorable riffs, but there are a handful of songs that are melodic enough to be pretty enjoyable. Dave Hill’s voice is still a stand-out, all raspy and impassioned and the keyboards that I hated in 1987 I’m kinda diggin’ these days. The cover art is a bit stiff, like it was done by a decent year 11 art student who was almost there but not quite, and that turned me off a bit as a kid. Now I look at it with fondness, the same way that some of those 70s sci-fi and fantasy artists couldn’t get people’s faces quite right in their paintings – I love that shit. Of course I don’t like this cover as much as the ‘Night of the Demon’ cover – one of the best album covers of all time. So to summarise; this album’s better than I gave it credit for, but their first two albums are where it’s at. 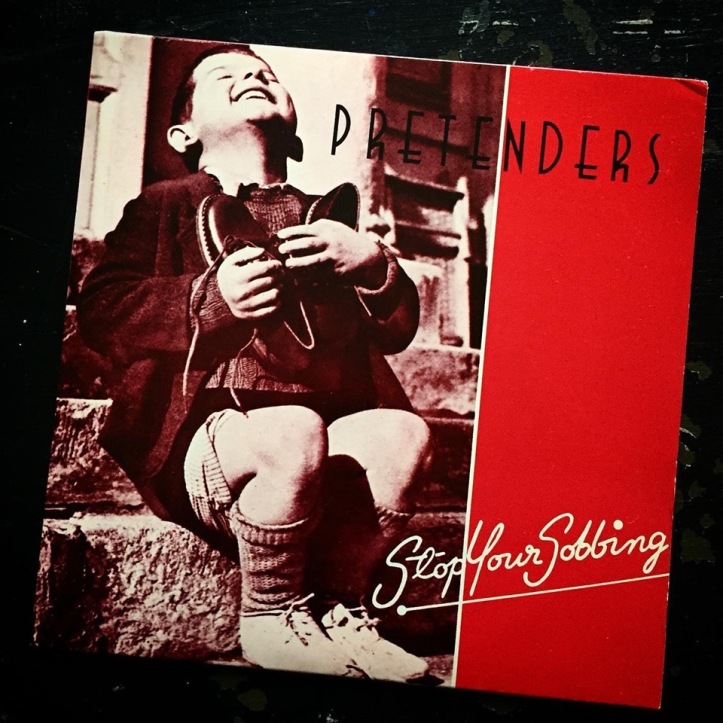 Produced by Nick Lowe.  So apparently Nick Lowe produced this, the first Pretenders single from their debut album, and then abandoned the band before they recorded the rest of the album because he thought they were going nowhere. What the hell! What a fool! That first Pretenders album is one of the greatest debuts of all time – and the next two are pretty damn good, too. I’m unsure how Lowe could’ve got this so wrong – killer songs, killer looking band, ultra-cool female up front – winning on all fronts as far as I can see. Chrissie Hynde is friggen excellent – on the first 5 Pretenders album she nearly writes every single song! So then it’s strange that this, the first single of her career is a cover of an old Kinks song, when she had so many great songs of her own. That being said, this is the definitive version – the Kinks one is kinda crap, actually. Buy the album for a punk/post punk/pop/rock delight! 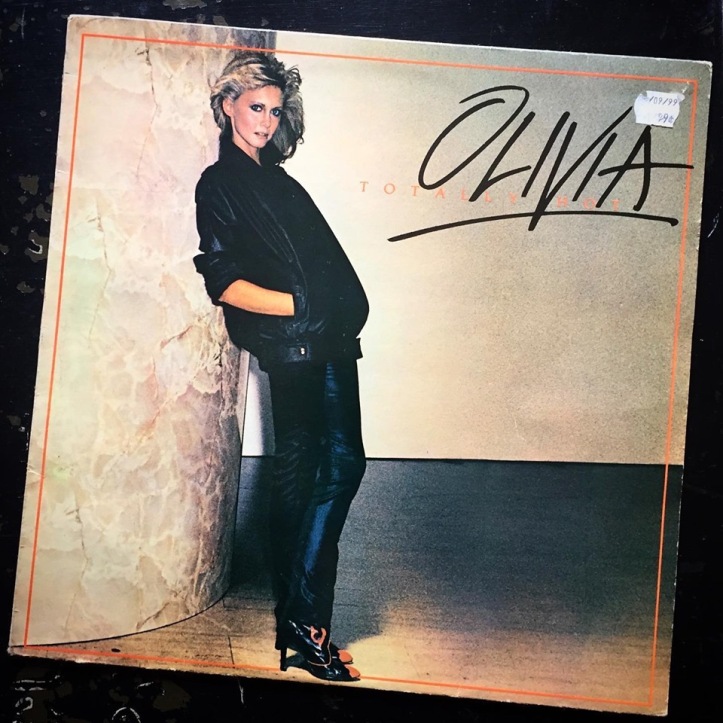 Produced by John Farrar.  Shit, how am I going to justify this being in my record collection, ha ha. Well, it was 99 cents, for starters. In all seriousness, from 78 to 82 ONJ had at least two absolutely killer pop gems per album. This album’s got ‘Deeper Than The Night’ (which was strangely not included in her Greatest Hits album from 82), ‘A Little More Love’ – and if you throw in the title track, you’ve easily got your 99 cents worth. Unfortunately people these days probably aren’t charging 99 cents for this. The cover shows a bit of a change of direction from her previous wholesome image to a more sultry, leather-clad look, I guess to mirror her change from preppie to sex-bomb in the Grease film that was released the same year. She looked pretty good at the end of that film – not many people can pull-off the spandex panted look…ONJ, David Lee Roth pre-1990 and the members of hot-gossip, both male and female and that’s about it, ha ha. Anyway, not much else is any good on this – in fact most of it turns my stomach – and that includes the song written by Adam Mitchell, who co-wrote some killer tunes for Kiss from the Creatures of the Night and Killers albums. Still, the two songs I mentioned earlier – gold, and Steve Lukather adds some rock credibility on guitar, too!

Produced by Thom Wilson and Christian Death.  Christian Death could win the prize for the best band name ever – damn it’s good. Love Rozz William’s vocal style on this, too – a kind of androgynous, droning bleat. On consequent albums he went a little more typical goth rock croon, but for me this is the pinnacle of one of the pioneers of the death rock sound. Although it’s more than the some of it’s parts, the standouts are William’s vocal attack and Rikk Agnew’s slashing and at times screeching guitar – absolute trailblazers. Agnew previously played guitar in hardcore punk band, the Adolescents, and he definitely adds punk overtones to most of this, something that fell by the wayside when he left. That’s Rikk Agnew holding the mummified cat on the back cover. Speaking of mummified cats, as you do, about 15 years ago (here we go with another story, ha ha) we were at our friends’ place on a farm just out of Dunkeld at the foot of the Grampians. I found a mummified feral cat in one of the paddocks. Fuck they look gruesome – I guess any mummified animal does…actually, there’s a dead rat in the back shed at the moment that looks pretty horrific. Anyway, I thought I could use some photographs of said dehydrated feline in some photo-collage artwork further down the track, so I put it in a plastic bag for later use and it remained on the floor of the backseat of my car for about 6 months, as I didn’t want that disease ridden thing in my flat – yeah, better to have it in a confined space like a car that would heat up on hot days so it could fester and then I could breath in the cooties every time I had to drive somewhere. Anyway, I ended up taking some photos of it and then a goth friend of ours asked if she could have it. Ha ha, classic. I wonder if Rikk Agnew still has his mummified pet.