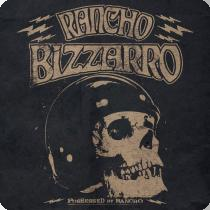 “When Palm Desert tunes meet Detroit sounds, it’s time for RANCHO BIZZARRO to take over! The Italian four-piece, known from their excellent jam sessions drenched into fuzzy instrumental Stoner Rock with the hint of a classic 70’s attitude, are set to release a brand new EP, coming on August 2nd 2019 via Argonauta Records! Following the band’s self-titled 2017 debut album and their critically acclaimed MONDO RANCHOEP ( 2018 ), the upcoming ‘Possessed By Rancho‘ EP will deliver a new trip of a sound between motorcycles, vans, women and bars!”

That is what the notes that come with the release say, and it was definitely enough to grab my attention, but does the music live up to the press release?  Let’s find out…

Opening with “Open Bar Deluxe”, a near eight minute, riff driven number, Rancho Bizzarro show us exactly what they’re made of.  And that is – at least in my estimation – booze soaked riff beasts.  This track has a massive sound, bolstered by mega riffs, slick bass lines, and a reliable beat underneath it all.  It’s ultimately a jam, one that I’m sure was allowed to come together naturally, and it works so well for that reason.

As “King of the Van” fires up, it has to be said that the band are doing everything right to keep my attention.  Instrumental music is great, but sometimes you really miss the vocals – the lack of voices doesn’t ever enter my mind here.  Rancho Bizzarro keep me interested and engaged throughout.  Midway through this track, the band break in to a bit of “Sweet Leaf” – a wink and a nod to Sabbath, the godfathers of doom and stoner metal.

“El Motardo Loco” gives us a groovy drum intro, before giving way to a really cool piece of music.  It’s a little more straight up rock this time with less of the doom and sludge, but it’s great!

“The Vengeance of Lord Humungus” opens up with a spoken passage – maybe from Mad Max, maybe created specifically for this record – either way, it’s conjures up images of a post apocalyptic wasteland, and adds a little something to the overall feel of the track.

“Giusquiamo Slow Drink” is the final track, and it’s a dark and ominous, moody piece that never really goes anywhere for its two and a half minute duration.  It’s not bad, it just adds nothing to the record in this position and might have been better suited as an intro to the EP.  As an outro, it left me on a low point.

Aside from the final piece, Possessed by Rancho is a great listen, and had me really enjoying the experience from the beginning.