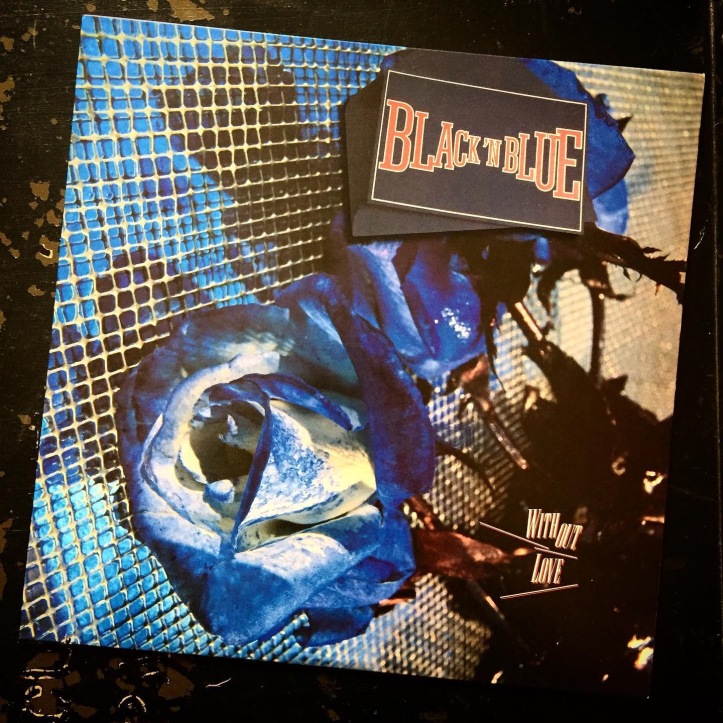 Produced by Fairbairn.  Before Tommy Thayer made his living imitating Ace Frehley in the band that died the day they put the makeup back on, he was in a friggen kick-arse band that I’m surprised didn’t become huge in the late 80s. Black’nBlue’s first album was pretty good, but had some really garbage lyrics that let it down. This, their second – what the fuck! This is just a masterpiece of hard-rockin’ pop metal! ‘Pop metal’ sounds pretty lame, I know – I tried to make it more credible with the ‘hard-rockin’ precursor, but you know what? – who gives a shit, because the songs on this fucken rule! I remember getting it from Metal For Melbourne in ’87 and loving everything about it – the cover, the songs, the production – magnificent. Rumour has it that Jon Bon Jovi heard this and was so impressed that he tracked down Bruce Fairbairn to produce Slippery When Wet, which is a great sounding record, but sucks a big one song-wise compared to this. Hooks galore, it’s mainly a good-time sounding affair, but there’s a darker turn on the second last song with the superb ‘Strange Things’ which really showed they had some depth in their songwriting chops. This album should have seen them become as big as Ratt, at least, and I’m not sure what happened – you will be hard pressed to find a better pop metal album than this. Best thing any of these guys have been involved in – Tommy joining Kiss as a copy of Ace Frehley – surely that must be soul destroying for him. I guess he can buy someone else’s soul with all the money Gene and Paul pay him, ha ha. I’ll just remember him the way everyone should – as one of the blokes who made this killer album.

When my daughter was about two, I remember playing this album a lot. She loved the song ‘Dirty City’ which has this post-apocalyptic wind sound at the start of it. When we would get in the car, I’d ask which song she wanted and she would say ‘whoosh’, as that’s what she called it, and then she’d put her hands to her mouth and make a whooshing sound. It was pretty cute. Not as cute as a few months later when she started to be able to sing some of the lyrics in her little two-and-a-half-year-old voice: “Watching the hookers and the hustlers”…ahem…not so much ‘whoosh’ as ‘whoops’. A couple of years later my wife introduced her to Frente or something equality non-distorted guitar based and that was the end of my daughter’s love affair with inappropriate hard rock. Bahh! Anyway, I always loved this album cover, both the concept and the execution. A great example of those photographic covers that were done in the 70s and 80s when you had a big budget to hire photographers and other experts to make everything look spot on. With stuff I’ve designed for bands I’ve been in, I’ve usually just gone for the ‘make it seem like you meant it to look shit’ theory to hide the fact that we couldn’t afford to pay anyone to help us with artwork, ha ha. Anyway, this album is a superb mix of progressive tendencies mixed with hard-rockin’ rawness. Of course Ronnie Montrose is fucken excellent on the guitar – that goes without saying – but what puts this album over the top is Davey Pattison’s vocals – surely one of the great underrated singers of the late 70s/early 80s with his Paul Rogers-like rasp and soulfulness. Their debut from the year before might even be better, but the cover’s not as good and there’s not a ‘whoosh’ orientated story to be found.

Been watching the latest series of ‘The Handmaid’s Tale’ and was surprised to hear Nick Lowe’s song ‘Cruel To Be Kind’ in it. Fuck that is a harrowing show. Apparently Margaret Atwood, the author of the novel it was based on has said that everything she included in the book is taken from real shit that has happened in different parts of the world at different times – that is bloody horrible. ‘Cruel to be Kind’ is such a dichotomy – the extremely joyous sound of the instrumentation coupled with lyrics that are basically describing emotional abuse in a relationship – pretty poignant choice for the soundtrack to The Handmaid’s Tale even though the tables are turned with the female being cruel to the male. Anyway, that show aside, I have always loved the way the song sounded. It’s got that kind of…I don’t know how to describe it…where you kind of get a tear in your eye, but you don’t know why – is that a genre? I haven’t listened to this album in it’s entirety since I got it in the early 90s, but was reminded of it because of the TV show. At first I wasn’t impressed, with none of the other songs being even close to as good as Cruel to be Kind. I was going to give it a bit of a negative write-up, but then thought I’d give his debut album, ‘Jesus of Cool’ from the year before, which I also haven’t listened to since the 90s, a spin and I found that a little more immediate. Then I listened to this again and a lot of it fell into place. The r’n’b/soul influenced numbers are pretty ace with great vocal hooks. There a couple of country/folkish type songs that I can’t get behind, although the more snappy numbers with country-ish licks are good, but a pretty solid album of pub rock/pop, all-in-all. His long-time associate Dave Edmunds and the band Rockpile are the backing band and one of my favourite dudes of all time, “Bluesy Huey Lewis” (for all you ‘Live & Dangerous’ fans!) plays harmonica on ‘Born Fighter’. Anyway, I got up to go to the can last night at 4am and fucking ‘Cruel to Be Kind’ was still playing in my head – that is one catchy friggen tune!

Produced by Harry Vanda & George Young.  I remember 1988 being a pretty disappointing year for me in regards to much loved bands releasing some unappetising albums. OU812, Ram It Down, Lies, Beast From The East, Heart Attack, Smashes Thrashes & Hits, Reach For The Sky, Skyscraper and In God We Trust are all the ones I can remember that didn’t live up to the previous releases by those bands. And of course Blow Up Your Video. I remember walking home from school after nicking up to the record shop to get this on a stinking hot Summer’s day, all excited about hearing my first new-release AC/DC album – I’d gotten into them probably 6 months or so after Who Made Who was released and had bought their whole back catalogue pretty much straight away, so this was the first occasion I had time to anticipate one of their releases. I’d seen the video to ‘Heatseeker’ on ’The Factory’ on channel 2 and wasn’t all that impressed, to be honest – sure it was nice and fast, but where was the memorable riff? Shoulda known to temper my expectations then and there. If I was to make myself a best of AC/DC compilation, none of the songs from this would be on it. And I’m no Brian Johnson hater – Flick of the Switch, Fly On The Wall are two of the most underrated albums in the history of rock, in my opinion. Look, it’s not a horrible album – most of it is quite listenable, but I don’t get that excited feeling of ‘fuck yeah, this rocks like hell’ on any of this. Five out of the nine albums that I mentioned at the start of this have actually grown on me over the years, but not Blow Up Your Video. 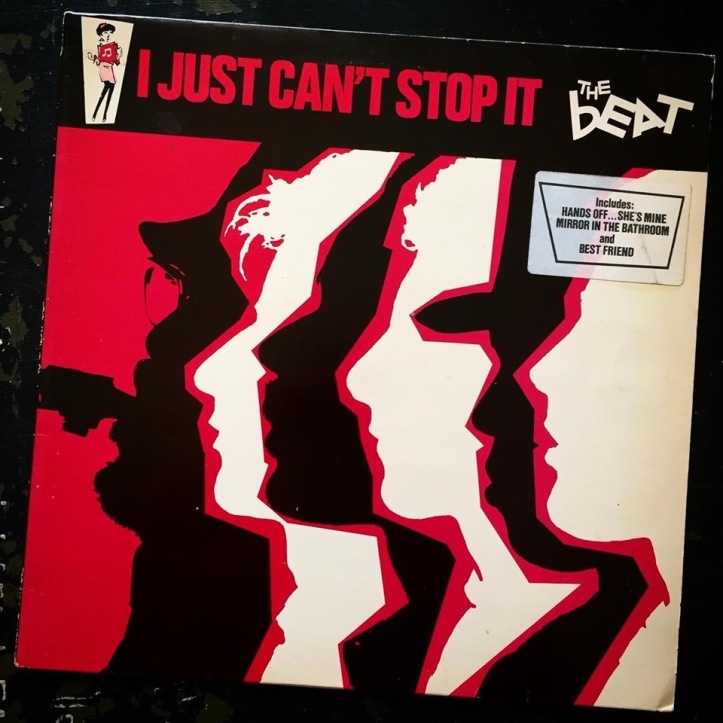 Produced by Bob Sargeant.  My favourite of all the second-wave ska bands and this is my favourite album of theirs and in fact one of the only ska albums that gets a regular spin at my place these days. Not that I hate Madness, the Specials, the Selecter or any of the other bands from that period, but there seemed to be an extra depth that the Beat had that has kept me loving this album since the early 90s. Everett Morton is a fucken machine on the drums – tight and snappy rimshots and energetic as hell. Actually, that’s what makes this album so good – there’s a real energy about it, even in the more reggae sounding stuff. There are a lot of pop moments in it, which are great, and then there’s also some pent up punkish aggression. Dave Wakeling has such a great tone in his voice, too. Awesome bass lines courtesy of David Steele, who with guitarist Andy Cox went on to form Fine Young Cannibals. I guess they found world-wide fame with that band, but this is the best thing they ever did. Favourite song? ‘Click Click’; 1 minute 28 seconds of blistering excellence – possibly the only time I will ever use the word ‘blistering’ to describe a song that has absolutely no distorted guitar in it, ha ha. It’s hard to pick just one favourite. Fucking magnificent album!