Chelsea Grin and Born of Osiris with Diamond Construct and Apate – The Brightside, Brisbane 22/6/19

Apate are a Brisbane band that I haven’t had the opportunity to catch before.

I always feel for the first act, as they do the heavy lifting to begin the momentum of the evening. Right off the bat the folks from Apate moved the crowd in closer and connected with them.

Their brand of nu-metalcore was a wall of sound that grabbed your every organ and gave it a harmonic realignment. Their music went from heavy, driving tracks, to openings that lulled you into a false sense of security and then grabbed you by the scruff of the neck. There were dischordant wind-downs at the end of tracks and some really clever vocal variations that proved that they are no one trick pony. There were backing effects that added tangible density to their music.

My beautiful wife drew a comparison between Zakk Ludwig (vocals) and Chris Hemsworth in appearance, but Zakk is no method actor. His vocals and stage presence were the real deal.

Their set had me head banging away and the crowd got into them quickly. At one point Zakk leant into the crowd to have a punter growl part of the song. This was stagecraft at its finest.

These artists are of the breed that don’t leave anything on the stage and their varied set left us hungry for more.

Their brand of metalcore was progressive in arrangement and the band had an obvious connection with each other, the result being a tight and well-defined sound.

Kynan’s voice was robust and forceful and the crowd responded to him, following any lead that they were given by the music – from frenetic dancing to in-the-moment head nodding. I really enjoyed him saying at one point, “Respect each other and let’s have some fun.” 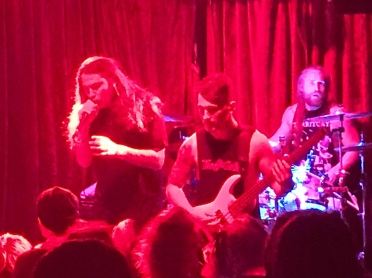 The 5 members of Born of Osiris received a warm and enthusiastic reception as this band from Chicago stepped up. They had a clarity of sound that was stark and arresting, immediately engaging the crowd. A melodic backing slithered and surged through the sound and killer drumming was often a highlight.

Ronnie Canizaro’s vocals were stable, strong and smooth and they seemed like they could go on for eternity – there were no points where they faltered. This was indeed impressive. Other members of the band also chipped in vocals and these were used expertly as harmonic counterpoints.

This was a calm, purposeful masterclass on how to deliver excellent music. They perfectly utilised tempo and key changes that were like a shock to our systems.  The band seemed to have a collective unity of purpose and a commitment to shake our souls.

They did. Looking across the crowd there was a wall to wall admiration for the experience that we had just shared.

Chelsea Grin took over and we stepped back, down into the underworld.  The crowd surged forward, eager to be fed Chelsea Grin’s hardcore grit and death metal. They obliged, with a tasty serve of metal enhanced madness.

Tom Barker’s vocals were appropriately deep, dark and guttural, punctuated with clear, harmonic contrasts. Hardcore drumming and great guitar depth were features of their performance. The sound was often complex and intricate, with many layers serving to combine synergistically.

The bass line of the tracks was often tangible and mesmerising, seeming to reverberate within us. 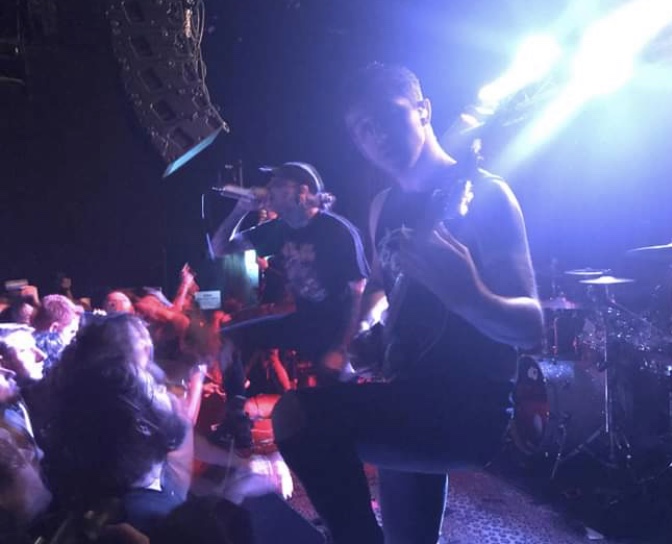 The band had also done their homework, encouraging an “Aussie! Aussie! Aussie” and engaging in a shoey for the first time in Australia of a band member. I always appreciate this – the band taking the time to know something about their audience. They also shared a genuine affirmation of the crowd and the bands that had preceded them. All of this is respectful and appreciated – kudos.

The term “Chelsea Grin” is a soccer hooligan term for when you cut a rival’s mouth and then kick them in the crotch, so they grimace and their mouth muscles flap open, resulting in a bloody grimace.

Any mouth pain we felt at the end of this set was from singing and smiling.

The Venue – The Brightside

Last night was the biggest crowd that I had seen at The Brightside, a favourite venue of ours. It is set up like an auditorium or the Coliseum, with the stage below the level of the venue and the dance floor below that, but the bar, seating and some more standing room is at a higher level. It makes for great viewing and because there’s no barrier between the band and the punters, it’s an intimate and connected experience.

The staff were super helpful and they take their friendliness and customer service seriously. There’s a great selection of beverages behind the bar, but no wine. There were more security staff on duty last night, but they were unobtrusive and professional.

Inside has a character from a different age, as the venue is historic. It’s a top venue.